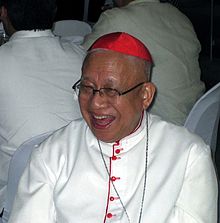 Ricardo Vidal studied Catholic theology and philosophy at the Franz von Sales Seminar in Lipa and at the St. Charles Seminar in Makati . On March 17, 1956, he received the sacrament of ordination in Lucena . From 1956 to 1965 he was teacher and spiritual at the diocesan seminary in Lucena. its rain from 1965 to 1971. In 1969 Pope Paul VI appointed him . to the chaplain of honor ( monsignor ).

On September 10, 1971, he was appointed titular bishop of Claternae and coadjutor bishop of the diocese of Malolos . He received episcopal ordination on November 30, 1971 by Carmine Rocco , Apostolic Nuncio in the Philippines , co-consecrators were Godfredo Pedernal Pisig , Bishop of Borongan , and Rafael Lim y Montiano , Bishop of Laoag . From 1973 onwards he served as Archbishop of Lipa for eight years before Pope John Paul II appointed him Coadju Archbishop in 1981 and Archbishop of Cebu a year later.

Pope John Paul II accepted him on May 25, 1985 as a cardinal priest with the titular church Santi Pietro e Paolo a Via Ostiense in the College of Cardinals . He was a participant in the 2005 conclave , in which Pope Benedict XVI. was chosen. On October 15, 2010, Pope Benedict XVI. his resignation request submitted for reasons of age. Since he exceeded the canonical age limit of 80 in 2011, he did not take part in the 2013 conclave .

Within the Catholic Bishops' Conference of the Philippines , which he also chaired from 1985 to 1987, Ricardo Vidal's special focus was on the care of priestly vocations; for many years he was President of the Episcopal Commission for Vocations. He was a member of the Congregation for the Evangelization of Peoples , the Congregation for Catholic Education and the Pontifical Council for Health Pastoral Care .

Vidal died on October 18, 2017 at the age of 86 in Cebu City, Philippines. Until recently, the retired Archbishop, who resigned in the Sto. Niño Village of Cebu City had heart problems. After undergoing heart surgery in 2004, he suffered a minor stroke in September 2013 .