The Archdiocese of Cebu ( Latin : Archidioecesis Nominis Iesu o Caebuana ) is a diocese of the Roman Catholic Church in the Philippines with its seat in Cebu City .

It was established in 1595 as the diocese of Cebu out of the diocese of Manila and raised to an archbishopric in 1934. Its territory includes the island of Cebu . The diocese gave up on September 17, 1902 parts of its territory to establish the Apostolic Prefecture Mariana Islands . In 2016 it had 4.3 million people, that is 88 percent of the population of Cebu. 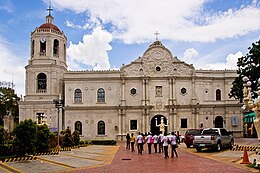 Cathedral of the Archdiocese of Cebu
Metropolitan Seats in the Philippines