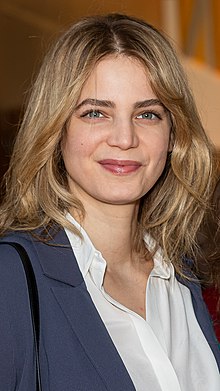 Rike Schmid spent her childhood and youth in Cologne . She made her first stage experiences at the age of twelve in improvisational theater . Immediately after graduating from high school in 1999, she played a leading role on TV in the ARD series Aus gute Haus . Appearances in television films and other series followed, including Die Sitte (2003). From 2003 to 2007 she was seen at the side of Oscar winner Maximilian Schell in several seasons of the ZDF series Der Fürst und das Mädchen , played in the theater film Baal (2004), the leading role in the historical two-parter Nero (2005) and in the movie Schwere Jungs (2006). Numerous roles in films and series followed, including a. in the ZDF film Eyewitness (2008), the RTL adventure movie Ausgerechte Afrika (2010), the Bollywood film Don - The King is Back (2011) and in 2014 in the ZDF comedy Just No Stress .

In addition to her acting career, she studied sociology, psychology and education at the University of Cologne and the Free University of Berlin . She completed her studies in 2009 with a degree in sociology.

As an author, she published the academic work Actresses in 2011 . The search for female identity in Berlin's Logos-Verlag and, in 2015, Herbig-Verlag, the book Take me with you after yesterday , which is based on an intergenerational correspondence with her 89-year-old colleague Renate Delfs .

In 2018 she received a practical scholarship at Villa Massimo in Rome.