Roumi is a redirect to this article. For the Lebanese singer and actress, see Majida El Roumi .

An illustration from the 19th century

Rumi's father, Baha ad-Din Walad, was a respected theologian in the historical region of Khorasan who, when his son was born, lived either in Balkh south of the Amu Darya or in the small town of Wachsh (Lewkand) north of the river and whose spiritual lineage was on Ahmad Ghazali is repatriated ; his paternal grandfather, Husain, was a noted scholar. According to an early and legendary biography, his paternal ancestry is said to be traced back to the caliph Abu Bakr , while his mother, Mu'mina, is said to have been the daughter of the Khorezm Shah Muhammad II .

When Rumi was a child, the Mongols invaded Balkh under Genghis Khan in 1219. His father had foreseen this, since the Khorezm Shah had some Mongol merchants killed and an act of revenge was to be feared. He and his family had already left the area to make a pilgrimage to Mecca . On the way there they met the well-known Sufi Farid ad-Din Attar in Nishapur , who was already an old man at that time.

Following the pilgrimage to Mecca , the family set off for Anatolia ( Rūm , hence the nickname Rūmī ), which was ruled by the Rum Seljuks at that time. During a stay in Laranda, today's Karaman , Jalal ad-Din's mother died; her grave is still a place of pilgrimage to this day. The family then moved to Konya. There Jalal ad-Din married his first wife Gauhar-Hatun (also Dschauhar Chatun), who had also fled from the east. In 1221 their first son Walad is born. Then in 1225, after the death of his first wife, Rumi married his second wife, Kira Chatum, who came from a Christian family; they had two children together.

The Seljuk Sultan Ala ad-Din Kai-Qubad I , who resided in the nearby city of Konya, heard of Baha ad-Din Walad's new whereabouts in 1228. Because he valued and promoted the sciences and philosophy, he wrote to him to offer him a residence and a professorship at the Madrasa (University) of Konya. Jalal ad-Din studied Islamic sciences there under his father and took over his chair after his father's death in 1230 or 1231. 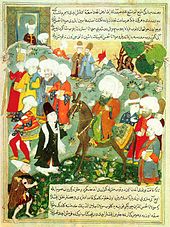 First meeting of Rumi (on horseback) and Schams-e Tabrizi (in dark dervish robes). Turkish miniature around 1600

He was introduced to Sufism by a murschid named Sayyid Burhanuddin Muhaqqiq Tirmidhi . Together they traveled to Aleppo and Damascus , where they are said to have met Ibn Arabi from Spain ( Murcia ), an influential Sufi master.

As a scholar, Maulana Jalal ad-Din (Rumi) achieved great fame, and he lived and acted as it should be traditionally for an established and highly respected scholar. It was only when he met the dervish Shams-e Tabrizi (also known as Shamsuddin Tabrizi) in Konya in 1244 that his life changed radically. Shams-e Tabrizi was himself a student of Hajji Baktasch Wali , who lived at the same time. Shams was a strong personality, endowed with great spiritual abilities. The spiritual bond between the two friends became so strong that Maulana (Rumi) temporarily renounced the world in order to devote himself entirely to the friend's secrets.

After the jealousy and envy of many influential Konyaans grew too great, Shams fled the city. Rumi's grief was great until one day Shams returned. Probably because after a while the situation became just as unbearable as before, shams disappeared forever. It is believed today that he was murdered. The longing for the friend inspired Maulana Jalal ad-Din (Rumi) to the round dance, which is still imitated today, and to compose his verses, which are also much cited to this day. 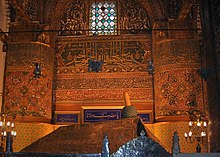 After his death, Maulana Jalal ad-Din was buried in a mausoleum, which the Maulawi Order (Turkish: Mevlevi ) then also served as a meeting place ( Tekke ). This mausoleum has been Konya's landmark ever since and has served as a place of pilgrimage for devout Muslims and Maulana's followers to this day. When Ataturk forbade public religious acts in the course of secularization on September 2, 1925 , the Mevlevi Order was also affected. Nevertheless, Jalal ad-Din's tomb did not lose its importance. It is a custom among the general population to buy small amulets in the shape of the tomb after visiting the mausoleum, which has been converted into a museum by the Turkish government.

The day of his death, December 17th, is traditionally marked with the şeb-i âruz ( Persian شب عروسى, DMG šab-i ʿarūsī , 'wedding night ') committed; Rumi called the day of his death a great wedding, as he would be united with God on it. The celebrations take place in Konya.

Maulana's (Rumi's) teaching is based on the fact that he saw love as the main force of the universe . More precisely, the universe is a harmonious whole in which each part is in a love relationship with all the others, which in turn is directed solely to God and can only endure through his love.

Man, who is created as part of this harmonious whole, can only achieve harmony with himself and the universe if he learns to love God. His love for God will enable him to love not only his fellow human beings, but everything God has created.

For Maulana, as for most Sufis, coming closer to God through love is the way to true fulfillment in life. The reason for his fame is that he had the ability to translate this teaching into poetry .

The verses attributed to him, possibly incorrectly, express this understanding:

Come over! Come over! Who you are
If you are also an idolater or a fire worshiper.
Come back! This is the door of hope not hopelessness.
Even when you break your promises a thousand times.
Come over! Come back!

He described the joy of drawing closer to God with the same fluency as the sadness of having to be separated from God. Like other mystical poets, he referred to God as the beloved and the human soul in search of God as the lover .

His quatrains, which express life wisdom in short words, are also particularly well-known:

“Do you think I know what I'm doing?
That I belong to myself for a breath or a half?
No more than a pen knows what it is writing,
or the ball can guess where it is about to fly. "

A famous poem , which was translated into German by Friedrich Rückert (1788–1866), deals with the transformation process of human existence and recalls the Buddhist cycle of life , but also aspects of Neoplatonism .

UNESCO and its 800th anniversary

UNESCO has declared 2007 the year of 'Rumi-Balkhi'. On the occasion of his 800th year of birth, the world organization had a 'Rumi Balkhi' medal minted .

Typical representation of Rumi on a Turkish banknote

Other selection and reading issues