The Valluga (also Valfaggar , derived from the Rhaeto-Romanic Val vaccaria , German Kuhtal ) is a 2809 meter high mountain in the western Lechtal Alps and the highest peak in the Arlberg area on the border between the Austrian states of Tyrol and Vorarlberg . Was first climbed the Valluga on 6 September 1877 by the Bregenz mountaineers and chairman of DÖAV - section Vorarlberg, Andreas Madlener, alone.

The mountain is three and a half kilometers as the crow flies north of the winter sports resort St. Christoph am Arlberg . Neighboring peaks in the west are the Pazielfernerspitzen (2712 m), the Pazielspitze (2770 m) and in the north, separated by the southern Pazieljoch (2495 m), the Roggspitze with 2747 meters. In the southeast is the 2660 meter high Jahnturm . To the west of the Valluga is the Pazielferner , a small glacier below the Trittscharte, the size of which has decreased significantly in recent decades due to increasing global warming . An even smaller ice field (remnants of the earlier Vallugaferner) exists just above the Vallugagrat station of the Vallugabahn . The European watershed between the Danube and the Rhine runs across the ridge south of the summit.

The Ulmer Hut on the southern flank of the mountain at an altitude of 2279 meters and the Stuttgarter Hut to the north (2305 m) serve as today's bases for ascent of the Valluga and for ski tours . From the Ulmer Hütte the normal route , the easiest ascent, leads in a north-easterly direction up to the Valfagehrjoch (2539 m) and from there north, then west to the Vallugagrat cable car station (2646 m). The Valluga summit can be reached in two hours via the south ridge . The mountain is also accessible via mountain railways from St. Anton am Arlberg and Galzig .

The large Ski Arlberg ski area extends around the Valluga . 88 lifts and cable cars open up 350 kilometers of slopes for downhill skiing. The Valluga is technically accessible from two aerial tramways (two sections). A slope is served from the Vallugabahn I mountain station, which branches off to a short connecting lift. At its mountain station you can either go to St. Anton or further to Stuben or to Warth.

The Vallugabahn II leads to the summit, where there is a viewing platform. In principle, this area is not suitable for skiing, but is still the starting point for many tourers.

The Vallugabahn I at the mountain station 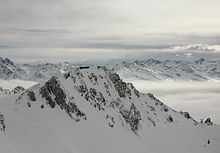 View from the viewing platform at 2647 m of the Schindlergratbahn and the Schindlerrinnen, Vallugabahn I at the bottom right

The Vallugabahn takes you to the summit of the Valluga in two cable car routes.

At the summit of Valluga is a C-band - weather radar of Austro Control , the data on the state warning center are available Vorarlberg.

The ZAMG weather radar, which was put into operation on the Valluga in October 2007 , now allows a comprehensive observation of Vorarlberg, which until then was only incomplete due to the detection with German and Swiss rain radars and a system on the Patscherkofel . Due to its very exposed position, it has a range of 220 km, but has been hit and paralyzed several times by lightning. It took several days to weeks for the spare parts to arrive from the USA.

According to those on the Hinterer Brunnenkogel , the Sonnblick and the Pitztal Glacier , the Valluga carries the fourth highest mountain weather station of the ZAMG, with which other values ​​(temperature, wind speed, humidity etc.) are permanently recorded and made available to the public via the Internet be asked.

Also located on the Valluga infrastructure for the Amateur Radio: a 2-meter - relay station (enter 145.6875 MHz, 145.0875 MHz output) and a Digipeater for Packet Radio . These two have the common amateur radio call sign OE7XVR. Between 2004 and 2010 there was also a relay station for amateur radio television (callsign OE7XSI) with interlinks to other relay stations in Austria, Switzerland and Germany.