The Wiener Straße in Berlin district of Kreuzberg is the southeastern extension of the Orange Street on the Skalitzer road out towards Treptow . Today it separates Görlitzer Park from the dense, predominantly Wilhelminian-era block perimeter development that extends south of Wiener Straße to the Landwehr Canal. 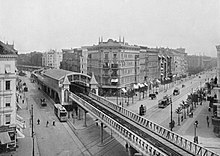 The former high station Oranienstrasse with a view of Wiener Strasse (right), 1902

Wiener Strasse with the Görlitzer Bahnhof , 1928

The street planned outside the city ​​wall at that time appeared for the first time in the development plan for Berlin and the surrounding area by James Hobrecht from 1862. Between 1865 and 1868, the Görlitzer Bahnhof terminus was built to the northeast of the street on the site of today's Görlitzer Park and at the same time the city wall was torn down ran on today's elevated railway line . On the south-west adjoining parcel, a bourgeois house was built at number 10 at the latest in 1866 and a tenement barracks at number 11 on Friedrich Wilhelm Krop's street, initially known as the Extended Oranienstrasse .

The road was paved and widened in 1873, sidewalks were laid and the land was connected to the sewer system . The layout of front gardens was laid down in the building regulations. On October 9 of the same year, the street was given its current name after the Austrian capital Vienna , as the first trains ran from Berlin to Vienna from Görlitzer Bahnhof (today only the Görlitzer Bahnhof underground station of the same name still exists ). With the construction of the Vienna Bridge , the street formed a joint street with Karl-Kunger-Straße in Alt-Treptow from 1896 to 1945 . On the occasion of the Berlin trade exhibition in 1896 in Treptower Park , Wiener Straße was used from April of the same year by the second line of Berlin electric trams from Görlitzer Bahnhof via Wiener Brücke to Bulgarische Straße at the corner of Neue Krugallee in Alt-Treptow . In 1903 the street was widened again and the typical granite slabs were laid on the sidewalks .

After the First World War , the street was mostly inhabited by supporters of the KPD . Nevertheless, the Berlin NSDAP was re-established in the Kock pub at number 25 in 1925 after being banned. When Hitler was elected Chancellor at the end of January 1933, a wave of terror from SA thugs passed through Kreuzberg. At number 10, a wild concentration camp was set up in the already existing Sturmlokal Wiener Garten owned by Kreuzberger SA , where communists and social democrats were tortured.

Many buildings on the street were damaged or destroyed during the Allied bombing at the end of the Second World War on the Görlitz train station. To make it more difficult for the Red Army to advance, the Vienna bridge over the Landwehr Canal was blown up by the Wehrmacht in April 1945 . In 1957 it was replaced by a pedestrian bridge, which lost its function after the Berlin Wall was built in 1961. The road suddenly had a border location and was no longer used for through traffic. Increased by the closure of the Görlitz train station, this had a strong impact on the economic importance of the street. The tram line 88 from Steglitz through Wiener Straße to the terminated station Wiener Brücke was closed on March 1, 1961 and replaced in this area by the A75 bus line .

In 1963, large parts of Kreuzberg were declared a redevelopment area. Wiener Straße and the area of ​​the former Görlitz train station were excluded from this, as the construction of a motorway, the planned southern bypass, was planned here . For a long time this prevented further development of the street and led to vacancies and the decline of many apartments. Vacant buildings were occupied and the area became the center of the left-alternative movement. In the late 1960s and 1970s, increasing numbers of Turkish workers took to the streets. At number 12, two mosques (the Ulu-Camii [Great Mosque] and Merkez-Camii [Central Mosque]) and two Turkish cultural associations were opened. In 2008 the newly built Omar-Ibn-Al-Khattab Mosque was opened at Wiener Straße 1-6. It is named after the conqueror Omar . 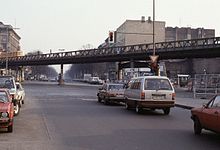 House numbers 1–6 : In the years 1888/1889 a four-story house was built on the corner of Manteuffelstrasse. Probably because of an error, the building was given six house numbers. At the turn of the 20th century, in addition to a piano factory and a machine factory, the Schildt newspaper forwarding company, which was later taken over by the Rudolf Mosse publishing house, was located. The house was supplemented in 1924 by a three-storey transverse and side wing as a factory building. Two years later, the rear building was extended, and the front building was also given a fifth floor. Up until the early 1930s, the tenants were partly at the same time, partly one after the other, branches of the newspaper expeditions of the Berliner Volks-Zeitung and Berliner Morgen-Zeitung of the Mosse publishing house, a light cure institute, a dry cleaning company and a number of other companies.

On February 3, 1945, the house was completely destroyed in an Allied air raid. In January 1952 Ernst Wolff, owner of the Mosaik-Film and the restaurants and cinemas , became the owner of the property and took care of the clearing of the ruins. In the years 1953/1954 the low-rise cinema Colosseum with around 700 seats was built. A simple building, in keeping with the taste of the time, in which the later district mayor of Kreuzberg, Günter König, worked as a ticket teller. In the course of the cinema dying and the loss of visitors from East Berlin due to the construction of the Wall in 1961, the Wolff cinema empire became unprofitable and the cinema was sold.

The not quite finished Omar-Ibn-Al-Khattab Mosque , February 2008

The buyer was the C. Bolle dairy , which in January 1969 converted the cinema into a Bolle self-service shop. The entrance on Wiener Straße was walled up and moved around the corner. 18 years later, this supermarket was looted during the rioting of the May demonstration on May 1, 1987 and later set on fire by serial arsonist Armin St. without any connection to the rioters. The news of these events made Kreuzberg known worldwide; The US magazine The New Yorker on November 25, 1988 stated (regardless of the truth of the matter): "[...] Kreuzberg's largest supermarket was on fire". Today the Maschari Center , which opened in 2008, with the Omar Ibn Al Khattab mosque stands on the property .

Number 10 : The four-storey residential building, designed in the Wilhelmine - Classicist style, was built by Friedrich Wilhelm Krop between 1866 and 1873 and at that time consisted of the front building and the right side wing. The spacious apartments with six rooms each had a high standard of living. In 1905 a four-storey factory building was built in the back garden area and the “Wiener Garten” restaurant was built on the mezzanine floor and in the basement. A bowling alley was installed along the entire length of the wing basement and was to be converted into a cinema in 1912. After the runway was torn down, the project was discontinued. In 1915 the “Atelier Gericke for modern photography”, owned by CW Steiner, was located in this building. Several restructurings and expansions followed due to changes in rent and ownership. In 1920 the 6-room apartments were divided due to the housing shortage after the First World War and the Great Depression.

From 1929 one was in the guest rooms Transport Local of NSDAP and a storm local Kreuzberg SA . This was preceded by the destruction of the previous meeting point, the Kock pub at Wiener Straße 25, by supporters of the KPD . The Vienna Garden was mainly used as a base by SA storm 27, and at times also by storms 25 and 5. The latter was led by storm leader Horst Wessel - stylized as a martyr by the Nazis . Accordingly, the bar was the subject of violent disputes between various political groups, especially between the Red Front Fighter League and the SA. The pub had been under surveillance by the political police since 1929 . The building police spoke in 1931 of a ban on use because the meeting rooms of the former bowling alley did not meet the regulations. This detour was used to get the problematic situation under control. The innkeeper appealed unsuccessfully, but ultimately the ban was not enforced. From September 1930, training courses for the Oberster SA-Führer -Ost leadership school took place in the rooms; the swastika flag waved for days at the front facing the street . When the disputes between the political groups came to a head in 1932/1933, the former bowling alley was converted into a torture cellar for the SA on January 30, 1933, and later a wild concentration camp . With the " seizure of power " by the Nazis, the bar lost its function as a storm bar and the Vienna Garden was visibly run down with frequent changes of ownership.

Number 11 : The five- story tenement was built by the same owner as number 10, Friedrich Wilhelm Krop, and sold again in 1976. The apartments, however, were smaller and of poor quality.

Number 12 : The house, built by Krop like numbers 10 and 11, consists of small apartments in the front building and commercial buildings in the two back courtyards. The building file in the Kreuzberg district office from 1979 notes that there has been a mosque "for some time" in the right wing on the second floor, the Ulu-Camii ("Great Mosque"). In 1980 the mosque took up several floors. The Turkish Community in Berlin (“Berlin Turk Ocağı”) carried out renovations in 1980 and now offered a Koran school , church services and women's meetings. In addition to the Ulu-Camii, it also had washrooms, an office for the Hodscha , a café frequented by men, and meeting rooms in the house.

Later, the Turkish-Islamic Union of the Institute for Religion (DİTİB) set up a second mosque, the Merkez-Camii (“Central Mosque”) with a Koran school and other rooms. The DİTİB is now also the owner of the building.

Number 18 : There is the former pawn shop of the Görlitz train station, which is now a listed building.

Number 33a : The corner house housed part of the post office for the Berlin SO 36 delivery district from at least 1907 , as the premises in Görlitz train station ( number 59i ) were no longer sufficient. In 1927, the areas outsourced to the station moved to the larger, brick-built post office on Skalitzer Strasse. With the demolition of the station, the new post office took over the entire district.

Number 64 : From 1910 to 1940 there was a department store owned by the Leyser brothers here, which was stormed and looted during the November pogroms in 1938 . After the building was destroyed, the Kreuzberg fire station was set up here in November 1973 and went into operation three years later.

Furthermore, here are the Görlitzer Park and swim at Spreewaldplatz in the number 59h , is a plaque for 295 people in the hall, from the on 21 August 1947 in exile in Shanghai returned to Berlin.

At the level of Liegnitzer Strasse, a narrow pedestrian tunnel, which was around 190 meters long and crossed under the station area, connected the quarter with the Silesian Quarter on Görlitzer Strasse. Because of the pungent smell prevailing there, it was also called "urethra".

In the street is the fictional pub “Einfall”, in which Frank, the main character in the novel Herr Lehmann by Sven Regener , works as a waitress. The title of Regener's novel Wiener Straße from 2017 refers directly to Wiener Straße , also with Mr. Lehmann.