Cistercians of the strict observance

The Cistercians of the Stricter Observance , also known colloquially as Trappists , are an order in the Roman Catholic Church . The order (lat. Ordo Cisterciensis strictioris observantiae , order abbreviation OCSO or Ordo Cisterciensium reformatorum , order abbreviation OCR ) was created in 1892 through the division of the Cistercian order and is open to women and men. The sisters of the order are also known as Trappists .

Eamon Fitzgerald has been Abbot General of the Trappists since 2008 .

Armand Jean Le Bouthillier de Rancé cannot be considered the founder of the Trappists, but he continued reform efforts and spread them. He was abbot in the Cistercian monastery La Trappe as early as 1637 . It was a benefice loaned by the court to the young nobleman, which was not connected with the residence obligation. After his conversion in 1657 through the death of his lover, the Duchess of Montbazon , he began to exercise his monastic duties after an ordinary novitiate . De Rancé's awareness of the need for repentance was fundamental to his reforms . In the foreground of the reform were self-denial, humility and asceticism . De Rancé refused, justified with humility, from any scientific studies in the monastery. The asceticism of the Trappists was expressed in strict rules of silence, hard manual labor, especially in agriculture, and strict rules of abstinence. In order to be able to communicate despite the Silentium , the Trappists used the traditional sign language of the Cistercians .

The reforms de Rancés were adopted by four male and one female monasteries. After de Rancé's death, the monks of La Trappe continued his reform work. In 1790 La Trappe was abolished in the course of the French Revolution . Augustin de Lestrange , novice master of La Trappe since 1785, fled to Switzerland with 21 monks . On June 1, 1791, the monks who had fled France settled in the abandoned Carthusian monastery of La Valsainte . In 1794 de Lestrange published the Règlements de La Valsainte , as the way of life of the monks of Valsainte. In the same year a congregation of monasteries was formed, which had adopted the reforms for themselves. This is how the Ordo et congregatio Beatae Mariae de La Trappe came into being .

When French troops invaded Switzerland in 1798, the monks had to leave La Valsainte. They migrated through Germany , Austria , Bohemia and Poland to Russia . From there they were expelled in 1800. The monks divided into different groups and came to Westphalia , Flanders , England and America . In this way the Congregation for Reform spread worldwide. After the fall of Napoleon , La Trappe was repopulated in 1814. In France , the Reformed also founded several new monasteries and repopulated old Cistercian abbeys. In 1830 ten male and four female monasteries belonged to the congregation, which at that time was not yet an independent order, but was subordinate to the Abbot General of the Cistercians.

1847 the Reformed of Pope Pius IX. divided into two congregations: one obeyed the de Rancés rules and the other the de Lestrange rules. Not until 1892, under Pope Leo XIII. , a joint order of both congregations, the order of the reformed Cistercians, was created . In 1902 the order was given the name Order of the Cistercians from the Stricter Observance , from which the valid name Cistercian Order of Stricter Observance developed. In the course of the 19th century, the order also established branches in Australia , Africa , Palestine , the Empire of China and Japan . In the course of the Second Vatican Council , penance and asceticism were reduced in the order. 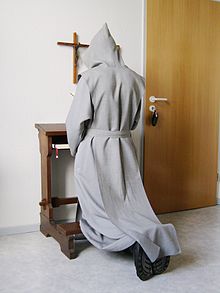 The Trappists lead a contemplative life with a strict enclosure . As a rule, they do not have pastoral care duties outside of the order .

In addition to strict asceticism and abstinence over the centuries, the order was characterized by absolute silence and the use of sign language as an alternative, except in conversations with the superiors or the confessor. In the course of the changes following the publication of the decree on the contemporary renewal of religious life, Perfectae caritatis , the relevant provisions were partially deleted.

Traditionally, prayer, reading and physical work determine the daily rhythm. Seven times a day the monks gather for the hours of prayer in the monastery church or in the oratory .

Adoration of the Virgin Mary has an important place in the life of the Trappists. In most houses, the individual times of prayer begin or end with the Marian antiphon from the Marian office .

The habit of the Trappists is comparable to that of the Cistercians: white habit, black shoulder wrap ( scapular ), in the choir the professed also wear the white cup . Trappists wear a leather belt as a cingulum . The Trappists are known for their seclusion, their monastic asceticism and their preference for physical work.

Some Trappist monasteries are known for their monastery products, for example jam , incense , parament production , liqueurs , Trappist cheese or Trappist beer . The sale of these respective products often contributes significantly to the maintenance of the monastery.

Abbots-General of the Cistercians of strict observance

(Until the legal reorganization of the Cistercian Order in 1892, the Congregations of the Reform of La Trappe were subordinate to the Abbot General OCist)

The only existing Trappist monastery in the German-speaking area is Engelszell Abbey in Engelhartszell in Austria. In Germany and Switzerland there are the Trappist convents of Maria Frieden Abbey in Dahlem, Gethsemani Monastery in Dannenfels, Egg Klause in Heiligenberg, Géronde in Siders and the La Fille-Dieu Abbey in Romont.

To the history of the order