from Wikipedia, the free encyclopedia
This is the spotted version , flagged on May 24, 2020 . There is 1 pending change that has yet to be viewed. 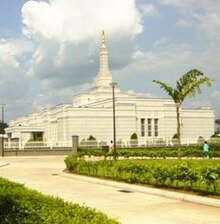 The city is located in southeastern Nigeria on the west bank of the Aba . The next larger cities are Port Harcourt in the southwest, Owerri in the northwest, Umuahia in the northeast, Ikot Ekpene in the east and Ikot Abasi in the southeast.

Aba was up to the establishment of a British military base in 1901, an old market town of Igbo . With the construction of the railway line to Port Harcourt in 1915, the city became an important transshipment point for palm oil and palm nut kernels.

In 1929, the Aba women's revolt broke out in Aba , an uprising of the city's female population against British tax policy. After the capture of the capital Enugu of the breakaway state of Biafra in October 1967 , Aba was temporarily the provisional seat of the government of the state.

The city is a major industrial and commercial center in the Niger Delta. A 30-kilometer pipeline supplies Aba's industrial area with natural gas from the Imo River . The production of textiles , pharmaceutical products, soap , plastics , cement , shoes and cosmetics are important , there is also a brewery and a distillery . The city is also known for its handicrafts .

The area around Aba is used for agriculture . Palm oil and palm nut kernels are extracted and kola nuts are harvested.

Aba has several high schools (including a state School of Arts and Science ), a teacher training college and several vocational and technical colleges .

Aba has been the seat of the Roman Catholic diocese of Aba since 1990 . Episcopal Church is the Christ the King Cathedral.