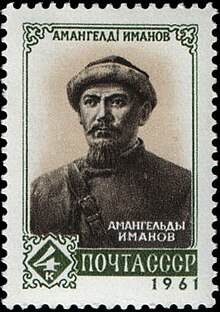 Amangeldy Imanov (postage stamp of the Post Office of the USSR , 1961)

Imanov's father Uderbai Imanow and his mother Kalampyr belonged to the Kipchak people and had too few cattle for a nomadic life, so they settled in Baikonur and lived on agriculture . At the age of 8, Imanov lost his father. He attended the Aul school and then entered a madrasa at the age of twelve . There he learned Turkish , Persian and Arabic .

When Nicholas II, with his so-called requisitions ukas of June 25, 1916, called on the non-Russian population between the ages of 19 and 43 to work close to the front during World War I , the rumor spread that the entire male population was trying to dig trenches between the Russian and German front should be used, so that there was an uprising in Kazakhstan. At the head of the insurgent Basmachi were Imanov and Alibi Dschangildin . Imanov formed a disciplined cavalry force and became commander in chief, relying on a council of war. At the height of the uprising, about 50,000 fighters followed Imanov's flag. In October 1916, Imanov besieged Torghai (in what is now Qostanai ). As the Russian relief corps approached, the rebels advanced towards him and began guerrilla warfare . The fighting lasted until February 1917, when the Russian Corps withdrew as a result of the February 1917 Revolution .

In October 1917 , Imanov occupied Torghai and helped establish Soviet power in the Torghai area. Under the influence of Alibi Dschangildin he became a member of the Communist Party of Russia and took part in the Council Congress in Orenburg in 1918. In July 1918, he led a group of Soviet workers in the elections for the Aul and District Soviets . During the Russian Civil War , he and Dschangildin established Kazakh national Red Army units in Kazakhstan and supported the Red Partisans in the rear of the Kolchak Army. When the Kolchak Army moved through the Torghai area in the spring of 1919, the supporters of the Alash Orda began to revolt against Bolsheviks . Imanov was arrested by representatives of the Alash Orda and then shot.

Imanov's deeds were the subject of a song, a few poems and novels, a Soviet film (1938) and two paintings. Alexei Ilyich Teneta created a monumental bust of Imanov in 1941. A monument with the equestrian statue of Imanov by the architect Toleu Bassenow and the sculptor Chasbulat Askar-Saryja was erected in Almaty in 1947 . In the Transili-Alatau of the Tian Shan there is the Amangeldy peak. There are Amangeldy streets in Almaty, Nur-Sultan (until 2019 Astana) , Schymkent , Taras , Taldyqorghan , Oral , Qostanai , Petropawl , Pavlodar , Temirtau , Semei , Chromtau , Arys , Balqasch , Shakhtinsk , Kentau and other cities while there Imanov Street is in Sheqasghan and Satbayev . In 1964, an Imanow museum was opened in Amangeldy, the place where he was born.