The title of this article is ambiguous. Further meanings are listed under Antananarivo (disambiguation) . 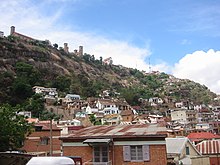 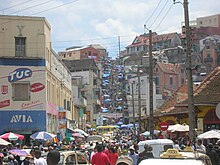 Antananarivo ([ antananaˈriːvu ], abbreviated Tana , formerly also Tananarive ) is the capital and with 1,816,000 inhabitants also by far the largest city in Madagascar . The administrative seat of the province of Antananarivo is located at an altitude of up to 1435 m above sea level in the central mountainous region of the island. Antananarivo is the geographical, administrative and industrial center of the country.

The place was founded around 1625. The name means the city of a thousand . In 1797 it became the capital of the Merina kings.

The conquests of King Radama I made Antananarivo the capital of almost all of Madagascar . In 1895 the city was occupied by France and incorporated into its protectorate of Madagascar. During the colonial period and shortly after the island became independent, the city was named Tananarive .

According to United Nations figures, the population of the Antananarivo agglomeration grew from 177,000 in 1950 to 2.9 million in 2017.

The city is divided into six arrondissements .

Mayor from September 12, 2007 was Andry Rajoelina , who had been elected with 63.32% of the vote. After unrest in the city in January 2009, he called on President Marc Ravalomanana to resign; on February 3, 2009, Ravalomanana was deposed by the government and Rajoelina was his interim successor.

The economy relies on the production of food and textiles. Antananarivo is the administrative, communication and economic center of Madagascar.

Antananarivo International Airport (Ivato) is located on the northern outskirts of the city .

In order to improve local public transport, the old Tana tram is currently being reactivated with material donations from Switzerland . Old train compositions of the Zürcher Forchbahn and other Swiss private railways are to run on the narrow-gauge network . The route network has a length of 25 kilometers. However, the project was never implemented.

The city is the seat of the Université d'Antananarivo and the Collège Rural d'Ambatobe . The Goethe-Institut has a library focusing on Madagascar. Other foreign institutes such as the Alliance Française and various international aid organizations are also based here.

In 1962, the then German President Heinrich Lübke welcomed the Tsiranana couple on a trip to Africa in what was then known as Tananarive with the words: "Dear Mr. President, dear Ms. Tananarive!"

According to a list of the world's most unhealthy cities published by Forbes magazine , Antananarivo ranks third.

Nice in France and Armenia's capital Yerevan are twin cities .

Despite its location in the tropics , Antananarivo is in the temperate climatic zone , which is why it is sometimes referred to as cold tropical due to its high location . Summer corresponds to the rainy season, winter to the dry season. Ground frost in winter is rare but not uncommon. Daytime temperatures in summer are rarely around 30 ° C or higher.