The Bösebrücke is an arch bridge in Berlin and connects the districts of Prenzlauer Berg and Gesundbrunnen via the tracks of the long-distance and S-Bahn . The structure along Bornholmer Straße is often incorrectly called the Bornholmer Bridge . The listed first riveted steel bridge in Berlin was opened in 1916 as the Hindenburg Bridge and was given its current name in 1948 after the communist resistance fighter Wilhelm Böse .

The bridge achieved worldwide fame on November 9, 1989, the day the Berlin Wall fell , when the Bornholmer Strasse border crossing at the eastern end of the Bösebrücke was the first crossing in East Berlin to be opened to GDR citizens .

The level crossing between the railway and the ring road leading from Plötzensee to Lichtenberg according to the Hobrecht plan developed into a traffic obstacle at the end of the 19th century. That is why the city ​​council of Berlin considered building a bridge over the railway. After examining various designs and models, a steel cantilever construction based on plans by the city building councilor Friedrich Krause and his employees Hedde, Sievers, Behrens, Pohl, Marcus and Heinzel were selected. While in a number of bridges these frames could be arranged as portal girders under the roadway, the Hindenburg Bridge had an elevated frame. Construction began in the summer of 1913, for the careful execution of the metal work, wooden falsework was set up between the existing tracks and larger parts were riveted together on site. Only after all the load-bearing parts were finished was the construction lowered onto the steel central supports and the lateral abutments . The bridge made of nickel steel was named Hindenburg Bridge when it was officially opened on September 11, 1916 (during the First World War ) . The general mobilization fell during the construction period , which led to personnel and material bottlenecks.

“The overpass of Bornholmer Strasse, which is located in the north of Berlin and which was recently opened to traffic and which will be called“ Hindenburgbrücke ”in the future, forms the final link of a street that runs from Plötzensee and from Plötzensee . via Weißensee , coming from Lichtenberg , encompasses the capital of the Reich in a ring, but has so far been interrupted by the Stettiner and the Northern Railway [...]. As with the nearby Swinemünde Bridge , the open spaces to be spanned only allowed a high supporting structure, otherwise the already very long ramps would have become too steep and no longer usable for wagons . In contrast to the hanging straps there, arched girders are chosen here, which find their support points on the sidewalks of the streets accompanying the tracks and bridge them with side arms, so that girders 138 m long are created, the upper chords of which are visible in their entirety, forming the bridge image Summarize a unit that makes it appear proportionally larger than the neighboring bridge, which is 90 m longer and sharply structured by the portal points. The span of the central opening is 87 m, that of the sides 25.5 m. "The bridge center has a height of 56.6 m, the bridge length is 54.3 m (west), 54.87 m (east) at the edges and the neighboring road crossings are given as 48.6 m (Björnsonstraße) and 47.7 m (Sonderburger Straße). The execution costs amounted to around 1.2 million marks (adjusted for purchasing power in today's currency: around 3 million euros ). The design and execution were subordinate to the management of the city building council for civil engineering secret building councilor Krause.

During the Second World War , both railroad tracks and large bridge structures were good landmarks for the Allied air raids . The Hindenburg Bridge did not suffer any major damage during the Battle of Berlin at the end of the war. On July 5, 1948, it was named after the resistance fighter Wilhelm Böse, who was executed in 1944 .

The bridge in divided Berlin

The information board on the history of the place at Platz des November 9, 1989 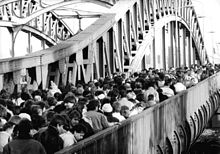 The Bösebrücke with numerous GDR citizens in front of the Bornholmer Strasse border crossing on November 18, 1989

In the four- sector city ​​of Berlin , the bridge, insofar as it spanned the track of the Deutsche Reichsbahn , belonged to the Soviet sector , while its 30 meters to the west lay in the French sector . Since the construction of the Berlin Wall on August 13, 1961, a wire mesh fence crowned with barbed wire has marked the sector boundary running directly on the western track below the bridge. The GDR built the Bornholmer Strasse border crossing for passenger cars and pedestrians at the bridge. The Reichsbahn shut down the Bornholmer Strasse S-Bahn station . It was initially passed through without stopping, later the tracks were laid and the trains drove through this section at top speed. For the tram in the eastern part of the city, a turning loop was built on Björnsonstraße in front of the bridge .

On August 23, 1962, the fleeing GDR transport policeman Hans-Dieter Wesa , who had already reached West Berlin territory, was shot by a comrade below the bridge . For years, a memorial cross on the dead tram track at the western end of the bridge commemorated the act of violence. From 1983 to 1985 West Berlin extensively repaired the bridge section in the Wedding district .

At the time, employees of western embassies used the diplomatic lane (“CD lane”) to go shopping in West Berlin. Because of their diplomatic status, they were not controlled. The head chef of the Swiss embassy, Peter Gross , took advantage of this fact to smuggle his GDR girlfriend over the Bösebrücke. He was arrested on February 1, 1975 during a check at the Bornholmer Strasse border crossing .

fall of the wall

On the evening of November 9, 1989, the GDR border troops were the first to open this border crossing in order to give in to the pressure of the masses from East Berlin. This was the beginning of the fall of the Berlin Wall . On November 9, 2013, an area of ​​the former border crossing was named “Platz des November 9, 1989” to commemorate this event. On a large information board, texts in German and English explain the events on site from 1961 to 1990 based on historical photos. The Bösebrücke was one of the main locations of the 15.3 kilometer long installation Light Border from November 7th to 9th, 2014.

Traffic and statics problems after the turn

Track looping of the tram over the bridge

Because of the narrow street width for four-lane traffic, after the opening of the Wall, demolition and construction of the Bösebrücke was temporarily discussed. The existing monument protection, on the other hand, led to the renovation of the bridge with partial renewals of the four staircases to the station. The work required for this began in the summer of 1991 and was completed on February 9, 1995. The cost of the complete renovation amounted to 26 million marks . It was difficult to restart the tram line that led over the Bösebrücke to the Virchow-Klinikum . So that the railways can run in each direction without switches in their respective track, the rails were implemented as a track loop by mid-2016 . The lane for car traffic remaining on both sides of the bridge does not correspond to the standard widths for two lanes each, which is why no lane guidance markings were applied directly to the bridge.

In 2008, examinations of the bridge steel showed that further renovation was necessary to ensure stability. In addition, damage to the roadway must be repaired and seals and all supply lines over the bridge renewed. In December 2008, the year 2010 was given as the possible start of the repairs.

"When the Senate Department for Urban Development and the Environment checked the Bösebrücke statically in 2012, it turned out in connection with material samples that the required load capacity is no longer guaranteed in the long term."

- Senate Department for Urban Development and the Environment

In July 2015, renovation work started over a period of two years, the main task of which was to strengthen and reduce the weight of the bridge in order to cope with the growing traffic. In the course of the renovation work, the track loop was removed and replaced by a single-track section with switches at the ends. On August 9, 2017, the bridge was reopened for traffic in both directions and the diversion via Jülicher-, Behm- and Malmöer Straße was dismantled.

The steel bridge is designed as a two- hinged arch with cantilever arms on both sides and articulated end fields as well as a suspended bridge plate. Light masts are integrated on both sides of the superstructure. The total bridge area is given as 3726 m². The bridge has footpaths that are six meters wide on both sides, and the entire carriageway is 15 meters wide.

“The main structure consists of two arched, riveted iron lattice girders that span the central opening. The trusses are V-shaped down to the upper edge of the terrain and are deeply founded on both sides of the railway lines via massive rammed-earth foundations. The main girders protrude 7.50 m into the side panels and form the supports for the towing girders in the side panels. The tow girders consist of almost parallel girders. The Bösebrücke is mounted on stilts in the abutment axes. The intermediate supports are mounted on articulated bearings that are fixed on all sides. In the middle section, the carriageway construction is linked to the arch structure via hangers, and in the end sections it is directly connected to the trusses of the lower chords. "

The Bösebrücke is included in the Berlin monument list as an architectural monument.

The song and the video Where are we now? by pop musician David Bowie remembered the night of November 9th, 1989 with the lines “Twenty thousand people cross Bösebrücke, fingers are crossed, just in case”.

The events on the bridge on November 9, 1989 are also repeatedly the subject of films. Due to the high volume of traffic on the Bösebrücke, the scenes are mostly shot on the nearby Swinemünde Bridge , which can be closed for a few days, for example for the films Das Wunder von Berlin or Bornholmer Strasse .