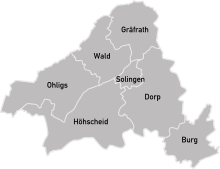 The borders from 1808–1888 of the seven former cities in the area of ​​today's city of Solingen; the mayor's office and town of Höhscheid in the south-western area

The Duchy of Berg last belonged to King Maximilian I Joseph of Bavaria due to inheritance . On March 15, 1806 he ceded the duchy to Napoleon Bonaparte in exchange for the principality of Ansbach . He transferred the duchy to his brother-in-law Joachim Murat , who united it on April 24, 1806 with the counties of Mark , Dortmund , Limburg on the right bank of the Rhine , the northern part of the Principality of Munster and other territories to form the Grand Duchy of Berg .

Soon after the takeover, the French administration in the Grand Duchy began to introduce new and modern administrative structures based on the French model. By August 3, 1806, this municipal reform replaced and unified the old Bergisch offices and rulers. It provided for the creation of departments , arrondissements , cantons and municipalities (called Mairies from the end of 1808) and broke with the old nobility prerogatives in local government. On November 14, 1808, this process was completed after a reorganization of the first structuring from 1806, the Altbergic honors were often retained and were assigned to the respective Mairies of a canton as rural communities. During this time, the municipality or Maire Höhscheid was created as part of the canton of Solingen in the Elberfeld arrondissement .

In 1813 the French withdrew from the Grand Duchy after the defeat in the Battle of the Nations near Leipzig and from the end of 1813 it fell under the provisional administration of Prussia in the so-called Generalgouvernement Berg , which was finally granted it by the resolutions of the Congress of Vienna in 1815. With the formation of the Prussian province of Jülich-Kleve-Berg in 1816, the existing administrative structures were largely retained and, while maintaining the French borders, transformed into Prussian districts , mayorships and municipalities , which often survived into the 20th century. The canton of Solingen became the district of Solingen, the Maire Höhscheid became the mayor's office of Höhscheid.

On September 4, 1856 Höhscheid was due to the entry into force of that year in New Rhenish order the city charter , incorporated the Honschaften in the urban area.

The municipality and estate district statistics of the Rhine Province show 9,393 inhabitants for the year 1867. For 1871 122 residential places with a total of 1,252 residential buildings and 9,655 inhabitants are given (8,166 Protestant, 1,479 Catholic and ten other Christian beliefs).

With effect from August 1, 1929, the town and mayor's office of Höhscheid was incorporated into the town of Solingen.