The article is without a doubt relevant to Wikipedia. However, sources are only given for a few contents.

Breitkopf & Härtel is a music publisher based in Wiesbaden (headquarters), Leipzig and Paris . The Deutsche Verlag für Musik is also part of the publishing house . In 2000 he took over the publishing house Musica Rara from Monteux , France, on January 1, 2011 the Nepomuk Musik Verlag from Basel, Switzerland, on March 21, 2012 from Schott Music the distribution and printing of the performance material for the Eulenburg Orchestral Series. The archive of music publisher Breitkopf & Hartel of Leipzig stands as National valuable archive under cultural protection . 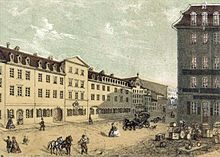 The Golden Bear - 135 years of the publishing house 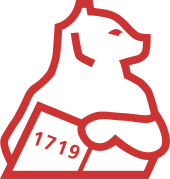 Breitkopf und Härtel is the oldest music publisher in the world. It was officially founded on January 27, 1719 when Bernhard Christoph Breitkopf married into the Müller printer family in Leipzig, who had been in the printing business for almost 200 years. In 1732 Breitkopf acquired the dilapidated “ Goldener Bär ” inn , in which he set up the publishing house after the new building . The heraldic animal in the publisher's signet, which is still used today, goes back to the inn sign . Breitkopf soon made a name for himself as a publisher of specialist literature (especially theology ) and works by the then very influential poet Johann Christoph Gottsched . At the same time the music publisher announced itself: In 1736 “Schemelli's hymn book” appeared, on which Johann Sebastian Bach had also contributed. The song collection "Singing Muse on the Pleiße" by Sperontes (from 1740) recorded several editions . In 1762 the son Johann Gottlob Immanuel was accepted into the management of the publishing house. In 1754 he improved the technique of printing notes with movable type. From 1756 he published works of almost all well-known composers in German-speaking countries (Bach-Söhne, Joseph Haydn , Leopold Mozart , Johann Joachim Quantz , Carl Stamitz , Georg Philipp Telemann and others). From 1762 to 1787 he compiled systematic lists of the works that he offered for sale. As important sources, these provide information on Haydn's music and the pre-classical period . When Goethe came to Leipzig in 1765 , he became friends with his two sons Bernhard Theodor (1749– after 1810) and Christoph Gottlob Breitkopf (1750–1800). Bernhard Theodor set Goethe's first poems to music; they were printed in 1770 without naming the still unknown poet. In 1794 Christoph Gottlob Breitkopf took over the management of the publishing house. After financial difficulties, he went into a partnership with Gottfried Christoph Härtel (1763-1827) in 1795 . The publishing house has been operating under the name Breitkopf & Härtel since 1796. In 1798, Härtel launched the first long-term music magazine, the Allgemeine musische Zeitung . From 1798 the 16-volume edition Œuvres complettes by Mozart appeared, which included piano and chamber music as well as songs, numerous first prints. A second series of oeuvres followed in 1799 with the piano works of Joseph Haydn, who was still living at the time.

After Breitkopf's death, Härtel took over the publishing house in 1800. He soon began collaborating with Beethoven as a publisher , so the main exponents of the Viennese Classic were all represented in the publishing program. In 1807, Härtel began producing pianoforte , which was maintained until 1872. The quality of Breitkopf grand pianos was valued by virtuoso piano virtuosos like Clara Schumann and Franz Liszt . In the first half of the 19th century, apart from Carl Maria von Weber and Franz Schubert, all the great composers were represented. In 1832, Raymund Härtel (1810–1888), the younger son of Gottfried Christoph Härtel, took over the publishing house. In the following years he published the works of composers such as Felix Mendelssohn Bartholdy , Robert Schumann , Franz Liszt and Richard Wagner . In 1833, the publishing house began to publish Frédéric Chopin's piano works . Two years later, Raymund's brother Hermann Härtel (1803–1875) joined the management team. Robert Schumann made the publisher aware of Johannes Brahms, who was still unknown in 1853 . He was also involved in editing Edvard Grieg's early sonatas .

In connection with the founding of the Leipzig Bach Society on the 100th anniversary of the death of the famous composer in 1850, the "half-century of total editions" began. In 1851 the first volume of the "old" Bach Complete Edition was available. This was followed by the complete editions of Handel (1858–1902), Beethoven (1862–1865), Mendelssohn Bartholdy (1874–1877), Mozart (1877–1893), Schumann (1879–1893), Schubert (1884–1897), Berlioz '( 1900–1907) and others. The main occupation of the publishing house at that time was not printing music, but literature. This is illustrated by the number of 108 book printers as opposed to 14 note printers who were employed in 1869. In 1867 Breitkopf and Härtel moved from the "Golden Bear" to the building on Nürnberger Strasse, which is still used today by Breitkopf & Härtel / Deutscher Verlag für Musik GmbH . After Hermann Härtel's death in 1875 and Raymund Härtel's departure in 1880, his nephews Oskar von Hase (1846–1921), the grandfather of today's co-owner Lieselotte Sievers, and Wilhelm Volkmann took over the management of the publishing house.

In 1877 the popular edition Breitkopf and Härtel was introduced, from which the Edition Breitkopf emerged in 1913, which is still published today . Breitkopf & Härtel's choir library was introduced in 1885, followed by the orchestra library in 1890, the score library in 1893 and the chamber music library in 1898. These four “standard libraries” are still included in the publisher's program today, even the title page, a wreath composed of late Baroque elements, still adorns many editions today. Only the Urtext editions got a new "face" in 2005. From 1910 Breitkopf & Härtel published works by the famous composer Jean Sibelius . Shortly before the First World War , the staff numbered almost 1,000. In 1896 Ludwig Volkmann (1870–1947) became a partner. In 1919 Hellmuth von Hase (1891–1979) joined as a personally liable partner. Despite the global economic crisis and inflation , the publisher published the 26-volume Brahms Complete Edition by 1927.

The publishing house in the time of National Socialism

In 1934 Breitkopf & Härtel published the book “Police intervene”. In his foreword, the then Reich Minister of the Interior, Wilhelm Frick, dedicated the book to the memory of the “police officers who died in the fight against communism and other criminality” who died as National Socialists and “their loyalty to people and fatherland sealed with death “. Frickel's wish: The book should "encourage young police officers to do the same as those who completed the phrase: Germany must live and if we have to die!" Two years later the publisher began to publish the "Yearbook of the German Air Force" , published by the Reich Ministry of Aviation . The yearbooks appeared between 1936 and 1942.

Both publications in the spirit of National Socialism were no coincidence, because publishing director Hellmuth von Hase had offered himself to the rulers early on: on May 13, 1933, on the occasion of the book burning, he was co-signatory of a declaration in the Börsenblatt for the German book trade , in which twelve were ostracized by the Nazis Authors classified as “harmful” - including Alfred Kerr, Heinrich Mann and Erich Maria Remarque. In 1939 Breitkopf & Härtel published Richard Wagner's anti-Semitic text, Judaism in Music .

You won't find out anything about this part of the publisher's history on the publisher's website in 2019 either, although the 300th anniversary will be celebrated in that year. One publisher's representative merely admitted that the era of National Socialism "has actually been a little neglected in the relevant historical publications!"

During the night of December 3rd to 4th, 1943, the publishing house on Nürnberger Strasse was badly damaged by a bomb attack , but parts of the archive holdings were preserved thanks to precautionary relocation. Most of them are now on deposit in the Saxon State Archives - Leipzig State Archives .

In 1945 Hellmuth von Hase moved to Wiesbaden with his family and closest employees. Following his release from American captivity at the end of 1945, Martin von Hase became the sole manager of the publishing house in Wiesbaden during the years of his brother's absence (mid-1946-late 1949) (transfer of the share to Martin von Hase on November 19, 1946). In 1947 he and Rosemarie Lienau ( music publisher Robert Lienau , Berlin) received license No. US-W-2035 for the reconstruction of Breitkopf & Härtel from “Military Government-Germany” in Berlin. In 1951, the publishing house was able to consolidate itself after the sale of valuable manuscripts that were acquired by the State of Hesse and incorporated into the music collection of the Darmstadt University and State Library . In 1952 Hellmuth and Martin von Hase were convicted in absentia in the GDR and the Leipziger Verlag was expropriated. It now traded as VEB Breitkopf & Härtel.

On September 1, 2015, the Leipzig music publisher Nick Pfefferkorn joined the management team of the publishing house alongside Lieselotte Sievers and Sebastian Mohr. This is the first time since Gottfried Möckel (1979) that Breitkopf & Härtel appointed a publishing director.

The printing company, which continued alongside the publishing business, also carried out orders from other publishers, as evidenced by the book press press. So let z. E.g. the Insel Verlag volumes of its series Insel-Bücherei , Pandora as well as Bibliotheca Mundi and Libri Librorum or the Verlag Karl Baedeker printed a large number of its travel guides with Breitkopf & Härtel until the mid-1930s .

The archives of the music publisher Breitkopf & Härtel form the holdings 21081 Breitkopf & Härtel, Leipzig in the Leipzig State Archives . It includes letter copy books from the period 1818 to 1910, correspondence in the form of letters received from 1896 and in the form of correspondence files (receipts and drafts or copies of outputs) from 1911 to the 1940s with business partners at home and abroad.

In addition to documents from the Breitkopf, Härtel, Volkmann and von Hase families, the archives also include a large number of prints from the 16th to 19th centuries from Oskar von Hases' private library.

As a nationally valuable archive , the holdings were placed under the protection of cultural property within the meaning of the 1954 Hague Convention for the Protection of Cultural Property in the Event of Armed Conflict .