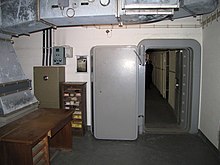 The large vault, the secret BBk-II series of the Deutsche Mark was stored here in twelve boxes

Connection tunnel to the bunker system

A 10 DM note from the replacement series BBk II

The buildings of the former Bundesbank bunker in Cochem-Cond, disguised as residential buildings (2015).

The Bundesbank bunker Cochem was a bunker of the Deutsche Bundesbank in Cochem ( Rhineland-Palatinate ) for the storage of an emergency currency . From 1964 to 1988, up to 15 billion marks were stored in the top-secret facility, which was supposed to protect Germany from a national economic crisis in the event of hyperinflation caused by the Cold War .

During the Cold War years, there was always the risk that a conflict could break out between the West ( NATO ) and the Eastern Bloc ( Warsaw Pact ). The Federal Republic of Germany in particular was endangered by its position as a border state between the two blocs. For this reason, various security precautions were taken in the Federal Republic of Germany, such as the government bunker near Ahrweiler , which was also built at the time . A similar bunker for storing currency reserves was built by the then Landeszentralbank Rhineland-Palatinate at the Spechtmühle near Lorscheid in the Trier-Saarburg district .

Among other things, there was fear of massive currency devaluation due to large amounts of counterfeit money that the Eastern Bloc was supposed to bring into circulation in the Federal Republic of Germany. In this case, purchasing power should be maintained with a reserve currency . For this purpose, a special series of the Deutsche Mark, the BBk II , was printed. The money stock was checked every three months by an auditor from the Bundesbank on a random basis . Apart from these examiners, nobody was allowed to enter the bunker.

In 1988 the emergency currency was destroyed and the bunker was initially empty. In 1994 the Deutsche Bundesbank sold the facility to Volksbank Cochem . Lockers for customers were installed in a vault in the bunker, but most of the complex remained untouched.

The entire system, consisting of the above-ground property with two large camouflage houses and the underground bunker and safe system, was sold in 2014 for less than 500,000 euros to a Treis-Karden entrepreneur who repaired the bunker system and turned it into a museum. The development plan for this was changed in 2015, but group tours have been offered since the end of 2015. Since March 2016, the Bundesbank-Bunker Cochem has also been open to individuals for guided tours as an official documentation center, a shuttle bus drives from May to the end of October from Endertplatz in Cochem to the bunker. The former tarn houses were converted into a hotel.

The 1,500 square meter bunker was built by the Deutsche Bundesbank between 1962 and 1964 in the Cochem district of Cond on the Hunsrück side, around 30 meters below the surface. The location was deliberately chosen in Cochem, as the Moselle valley offers very good protection against, for example, an atomic pressure wave . In addition, a location on the left bank of the Rhine was chosen. Frankfurt am Main is 108 kilometers to the east as the crow flies and thus closer to the inner-German border and the Fulda Gap .

The above-ground part of the facility on a 8700 square meter property was camouflaged as a training and recreation home of the Deutsche Bundesbank in a residential area . The bunker has a main and an emergency access. The bunker can be entered via the main entrance, located at Am Wald 35, or through the basement of the training center. The emergency exit is located in the cooling tower in the back of the garden and is camouflaged by trees and bushes.

To protect the bunker, a security system with sensors was installed in the walls of the safe, which react to vibrations and noise . When an alarm was triggered, the local police were automatically notified, but they did not know what was in the bunker. Only the home manager could enter the bunker and listen to noises in the vault using an intercom . The vault itself could only be entered by a few employees of the Bundesbank from Frankfurt, as the associated keys were not stored on site.

In the event of a nuclear war , the bunker would also have offered protection to 80 civilians who could have survived here for two weeks. In addition to the vaults, there were also bedrooms and work rooms, a warning point and a radio room with a direct connection to the Federal Ministry of the Interior . The plant had its own electricity supply via diesel generators and 18,000 liters of fuel reserve, the drinking water supply was secured by means of a deep well and a 40,000 liter water tank. The supply of breathing air was ensured via a sand filter .

Strategic bunker in West Germany during the Cold War