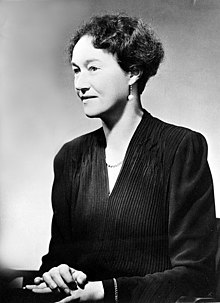 Charlotte was the second oldest of the six daughters of Grand Duke William IV of Luxembourg (1852-1912) and Infanta Maria Anna of Portugal (1861-1942). After her sister Marie-Adelheid abdicated , Charlotte succeeded her as Grand Duchess of Luxembourg on January 15, 1919. The referendum of September 28, 1919 confirmed the constitutional hereditary monarchy under Grand Duchess Charlotte.

After the occupation of Luxembourg by German troops on May 10, 1940, the Grand Duchess fled with her family and the government via France , Portugal and the United States into exile in Canada and London .

From 1940 to 1944 the Grand Duchess became a symbol of her country's freedom and independence through her radio addresses on the BBC . During this time in 1941 she also visited Luxembourgish emigrant groups and associations in the United States. Then she traveled in 1942 and 1943 on the so-called "Good Will Tours" through the United States.

On August 25, 1942, the grand ducal family was received by US President Roosevelt .

Finally, on September 10, 1944, the city of Luxembourg was liberated by American troops. Prince Felix and Hereditary Grand Duke Jean returned that same day and were enthusiastically received by the population.

The Grand Duchess returned from exile on April 14, 1945. In the following time she visited the villages and towns of the country destroyed during the Ardennes offensive . On June 29, 1945, the small Luxembourg army within the Allied troops, the so-called Brigade Piron or La Luxembourg battery, was officially demobilized in the capital in the presence of Charlotte and Félix.

On November 12, 1964, Grand Duchess Charlotte of Luxembourg abdicated in favor of her son Jean after a term of 45 years.

On July 9, 1985, Grand Duchess Charlotte died at the age of 89 at Fischbach Castle and was buried in the crypt of Luxembourg Cathedral.