Marie-Adelheid von Nassau-Weilburg ( French Marie-Adélaïde Thérèse Hilda Wilhelmine de Luxembourg ) (born June 14, 1894 at Berg Castle in Luxembourg ; † January 24, 1924 at Hohenburg Castle near Lenggries / Bavaria ) was Grand Duchess of from 1912 to 1919 Luxembourg and Duchess of Nassau . Their supposed support for the German occupation of Luxembourg during the First World War led to their unpopularity in Luxembourg as well as in France and Belgium. She abdicated in January 1919 in favor of her younger sister Charlotte , then became a nun in Italy, but had to give up monastery life due to her poor health and died in 1924 at the age of 29.

Princess Marie-Adelheid was born as the first of six daughters of Hereditary Grand Duke Wilhelm IV of Luxembourg and Infanta Maria Anna of Portugal . While her father was a Protestant , her mother was a Catholic . Like her five sisters, Marie-Adelheid was raised Catholic.

Since it was foreseeable that, due to a lack of male offspring, all lines of the entire Nassau house would die out after his death, Wilhelm IV. Abolished the Salic law valid in Luxembourg in 1907 with the consent of parliament in order to be able to proclaim his eldest daughter to the throne. This new regulation was not without controversy, as there were inheritance claims of Count Georg von Merenberg to the Luxembourg crown, which he defended vehemently, but ultimately in vain.

Because Wilhelm IV was marked by a serious illness, a creeping paralysis, his wife Maria Anna was appointed regent of the Grand Duchy on November 13, 1908. But Maria Anna mainly took care of her sick husband. She entrusted governesses with the upbringing of her daughters, who grew up in the Berg and Hohenburg castles and were visited by many aunts, but rarely had contact with other children, especially those of the gardeners who looked after the grand ducal estates.

The shy, but sometimes headstrong Marie-Adelheid liked to take long walks, collected butterflies, beetles and snails in a hut in the park of Hohenburg Castle and for a while looked after three bears, which were later given to the Munich Zoo. She had dark blue eyes and light brown hair. In October 1911 she traveled with her mother and sister Charlotte to the wedding of Zitas to the later Austrian Emperor Karl I , whereupon she announced after the testimony of her mother that she wanted to stay single and become a nun. At Berg Castle she found a new playmate in the lively Countess Anna Montgelas. 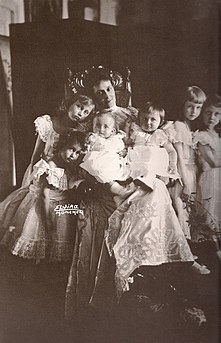 Maria-Adelheid (far left) as a little girl with mother and sisters, 1902

Even after the death of her father Wilhelm IV on February 25, 1912, the Grand Duchess Maria Anna continued the reign for a few months until Marie-Adelheid came of age on June 18, 1912. When she took office, she moved into the Luxembourg capital, enthusiastically received by the population, and swore the oath on the constitution. With Marie-Adelheid, for the first time since Count Johann the Blind , who was born in 1296, there was again a Luxembourg ruler born within the country, which the President of the Chamber of Deputies, Auguste Laval , who swore her in, specifically pointed out in his speech.

The Minister of State and District President Paul Eyschen , who has had a major influence on Luxembourg politics since 1888, loyally supported the 18-year-old Grand Duchess, who had become a zealous Catholic. Soon there were serious internal political conflicts because, unlike her immediate predecessors, Marie-Adelheid tried to actively intervene in government affairs and felt all relevant acts as serious decisions of conscience. In 1912, for example, she signed a new school law, which met strong opposition from the Catholic Church, only after some hesitation. This behavior earned her criticism from liberal and socialist MPs on the political left.

At the beginning of 1913 Marie-Adelheid visited Venice , Florence , Rome and Naples, among others . Shortly afterwards, she traveled to her first official state visit by Grand Duke Friedrich II of Baden . In June 1913 she paid a visit to the Belgian King Albert I and six months later to the Dutch Queen Wilhelmina . However, she did not think of marriage.

After the outbreak of World War I , Luxembourg was occupied by German troops from August 2, 1914, despite its neutrality . Although Marie-Adelheid officially protested, she received no support from any other country. When he set up his headquarters in Luxembourg's capital from the end of August to the end of September 1914 , she also had to officially receive the German Kaiser Wilhelm II at his request, which later led her to suspect a pro-German attitude. During the war, she and her mother and sisters personally devoted themselves to nursing and led the Luxembourg Red Cross.

Luxembourg's industry had primarily to serve the warfare of the Central Powers ; Food rationing proved necessary as a result of the general supply crisis. Resistance to the German occupiers was forcibly suppressed, but Marie-Adelheid was able to prevent executions of the opposition. 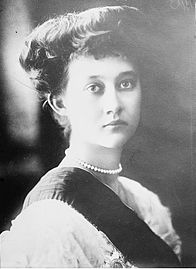 Paul Eyschen died in October 1915, which led to new internal political disputes. The Grand Duchess now relied on a conservative cabinet led by Minister of State and District President Hubert Loutsch , who had been in office since November 6, but who did not have a majority in the Chamber of Deputies . Rather, these were held by the left-wing parties who, among other things, rejected the government's rationing measures. After Marie-Adelheid had parliament dissolved on December 23, 1915, the left lost in the subsequent new elections, but still had a narrow majority. The chamber withdrew its confidence in the Loutsch government, which then had to resign. The new cabinet consisting of Conservatives, Liberals and Socialists, which took up government on February 24, 1916, was headed by Victor Thorn . As a result, the Grand Duchess renounced the further exercise of the prerogatives to which she was entitled, but nevertheless had to endure political attacks and slander campaigns.

In the autumn of 1916 Marie-Adelheid traveled to Königstein Castle in the Taunus to briefly visit her ailing grandmother on her father's side, Adelheid Marie von Anhalt-Dessau , at whose funeral she attended a month later. Therefore she was again accused by opposition politicians of being friendly to German. Meanwhile, inflation and famine rose in Luxembourg to such an extent that the Minister of Agriculture Michel Welter fell in December 1916 , and soon afterwards the entire government. Léon Kauffman , who headed a liberal-conservative cabinet, became the new Minister of State on June 19, 1917 . Food shortages and other problems caused by the war persisted. The Grand Duchess got along very well with Émile Reuter, who had been Kauffman's successor since September 28, 1918 . Shortly afterwards the First World War ended.

After the withdrawal of the Germans, Luxembourg was temporarily occupied by US and French troops . The American general John J. Pershing arrived in Luxembourg on November 20, 1918 and was received by Marie-Adelheid. The Grand Duchess was again confronted by opponents of the monarchy, who were supported by some Allied powers, among other things because of her earlier reception of Kaiser Wilhelm II, with the accusation of a pro-German attitude, while all sympathies for Germany were extinguished among the population. The German-friendliness assumed by the monarch also complicated Luxemburg's position vis-à-vis the Allies. There were increasing rumors that France or Belgium intended to annex the small country. 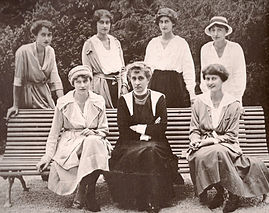 Maria-Adelheid with her mother and sisters in August 1920

From November 1918 to January 1919 there were revolutionary unrest. As early as November 11, 1918, a failed attempt by a self-appointed council of workers and peasants to proclaim a communist republic took place. A popular uprising organized by radical elements also failed on January 9, 1919, but Marie-Adelheid abdicated on the same day to save the country and the dynasty. On January 13, she presented her sister Charlotte to the ministers as her successor. Two days later, Charlotte took her oath as Grand Duchess of Luxembourg, which was confirmed in the referendum of September 28, 1919 .

At the end of January 1919, Marie-Adelheid and Countess Anna left Luxembourg and traveled first to Strasbourg , then to Montreux and settled in Villeneuve in March . In May they rented a small house in Spiez . Marie-Adelheid went to Italy with her sister Antonia and Countess Anna in October 1919 and met Pope Benedict XV in Rome . together. In mid-1920 she saw her mother and her sisters in Hohenburg.

Maria-Adelheid entered a Carmelite convent in Modena after papal advice in the autumn of 1920 , where she gave up smoking. Shortly afterwards she became melancholy and sick. She recovered on her family estates, then went to a hospital run by the Little Sisters of the Poor in Rome, where she cared for the sick and the elderly. Due to her poor health, she had to give up monastery life. Her aunt Maria Antonia of Portugal persuaded her to live with her for a while in a simple monastery pension in Einsiedeln , where she taught at a primary school run by the nuns.

In April 1922 Marie-Adelheid moved to Hohenburg Castle in Bavaria and attended the wedding of her sister Elisabeth to Ludwig Philipp von Thurn und Taxis on November 14, 1922 . She decided to train as a nurse and therefore began studying medicine at the University of Munich in 1923 . When she returned to Hohenburg Castle in the middle of that year, she showed clear symptoms of paratyphoid fever .

The 29-year-old, unmarried and childless former Grand Duchess died with her family on January 24, 1924. Her body was transferred to the crypt of Luxembourg Cathedral on October 22, 1947 .