The Chiemsee - the third largest lake in Germany 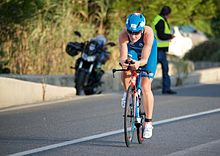 The Chiemsee Triathlon is a triathlon event that has been held annually at Chieming in Bavaria , in and around the Chiemsee since 2012 .

The "Chiemsee Triathlon" is called

In addition to the races on these two distances, a triathlon for people with disabilities is also held here.

Daniela Sämmler won the middle distance race for the third time in 2017. A total of 1200 athletes started over the various distances this year.

On June 23 and 24, 2018, the races on Lake Chiemsee were held for the seventh time. From 2019 the Chiemsee Triathlon will be an integral part of the Europe-wide series "European Triathlon League" by "Spirit Multisport". The newly founded series currently includes four triathlon events in four countries: