The discovery of radioactivity was a milestone in the development of modern physics .

At the end of the 19th century, there was still a largely closed Newtonian worldview. Although had Antoine Henri Becquerel discovered the previously unknown phenomenon that uranium and uranium salts could cause blackening of photographic emulsion, but this discovery has remained largely unknown. Nobody had any idea of atomic nuclei . The word radioactivity and its actual cause were unknown and with it the possible biological effects.

Working in the laboratory was more cumbersome and dangerous than today's techniques with electronic aids would suggest: solutions were stirred by hand, and mechanical scales with an accuracy of 0.1 mg were available for weighing processes . Also vacuum pumps were operated by hand and the vacuum thus created was compared with conventional vacuums today a million times weaker.

The time with the atomic number last 92 element of the periodic table uranium was in 1789 by the German, then living in Berlin chemistry professor and pharmacist Martin Heinrich Klaproth discovered. It is named after the planet Uranus , which was discovered eight years earlier (1781) by Friedrich Wilhelm Herschel . Klaproth isolated it as an oxide ; Eugène Peligot succeeded in producing it as a pure uranium metal in 1841.

In addition to its value for chemistry, it was mainly important in the form of its compounds as a dye. It was obtained by extraction from the pitchblende that occurs naturally in St. Joachimsthal .

The discovery of Becquerel

Antoine Henri Becquerel discovered in early 1896, while attempting to explain the X-rays that had just been found by fluorescence , that uranium salt (which fluoresces after exposure) was able to blacken photographic plates . The first attempts were always preceded by stimulation by sunlight. Due to a change in the weather, Becquerel was unable to expose the uranium preparations, but left them on the photo plate, which was protected by black paper. It was more by chance that he developed these plates and on March 1st discovered the same blackening as fluorescence. This was therefore excluded as the cause of the radiation. 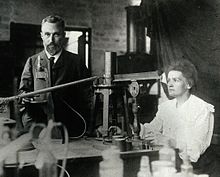 Pierre and Marie Curie in the laboratory (1906 at the latest)

Marie Curie's research into radioactivity began in 1897. She herself wrote: “The aim was to investigate the origin of the incidentally very low energy that was constantly being emitted by uranium in the form of radiation. Research into this phenomenon struck us as unusually interesting, all the more so since the problem was new and had not yet been described anywhere. I decided to devote myself to working on this topic. I had to find a place to do the experiments. Pierre Curie received permission from the director of the school to use the glazed work area on the ground floor for this purpose, which served as a warehouse and machine room. "

As part of her doctoral thesis , initiated by Pierre Curie , she checked the results of Becquerel and measured the ionization of the air caused by the radiation of the uranium preparations with the help of the discharge of a capacitor whose voltage (state of charge) was measured with a galvanometer . Ionization of the air caused the capacitor to discharge. This made it possible to make first quantitative statements about radiation. It wasn't long before she realized that the greater the uranium content, the more intense the radiation. Chemical compounds, pressure or temperature had no influence.

With this she had proven the radiation as an atomic property of uranium. In contrast to Becquerel, however, she not only examined uranium preparations, but also other minerals, and found a similar activity in thorium , although the German chemist Gerhard Carl Schmidt anticipated it in the publication . In the publication Sur une nouvelle substance fortement radio-active contenue dans la pechblende Marie and Pierre Curie coined the term radioactive for the first time .

For this and the following work, which led to the discovery of new, much more powerfully radiating elements, the Curies received the Nobel Prize in Physics in 1903 together with Antoine Henri Becquerel .

The Curie apparatus for measuring radioactivity was recreated in Marie Curie's laboratory (left picture). The circuit diagram on the right is based on a sketch by Marie Curie. In the middle on the laboratory table (left picture) there is a capacitor. Its approximately 8 cm horizontally lying plates ( A and B , designations in the circuit diagram) are covered by the silver cylinder. A battery ( P , not in the picture) charges the plates via switch ( C ). The circuit is closed via a common ground line (French: terre ). A galvanometer ( E , a quadrant electrometer), on the right in the picture on the wooden base, monitors the state of charge. The current is not read directly on the galvanometer, but this is used as a "zero instrument" (so that no special calibration is required) after a second voltage source ( Q ), on the right in the photo, has been applied to compensate for the capacitor discharge. This voltage source consists of a quartz crystal loaded by a weight ( piezoelectricity ), the compensation voltages can be read off the weights.

A defined amount of radioactive substance is scattered on the capacitor plates. The faster the plates then discharge through ionization of the air, the greater the radioactivity.

More powerful emitters than the uranium itself

In measurements on minerals that contained uranium and thorium, she found a significantly higher level of radioactivity than was to be expected from the quantities of uranium and thorium. Marie Curie verified this by artificially producing copper uranyl phosphate ( chalcolite ) and comparing it to the naturally occurring chalcolite, which was much more radiant. She concluded that the pitchblende and other uranium minerals must contain elements that had a much higher level of radioactivity than uranium. On April 12, 1899, Marie Curie announced in a notice to the Academy of Sciences that “two uranium minerals, pitchblende (uranite) and chalcolite (copper uranyl phosphate) are much more active than uranyl phosphate. This fact is remarkable and suggests that the minerals may contain a much more active element than uranium . ” At this point it was not known that there were actually two more active elements in the uranium samples. Next, the Curies set out to isolate these elements. They started in 1898 with 100 grams of pitchblende and eliminated the inactive elements using classical chemical techniques.

With a precipitation typical for the element bismuth , she receives a preparation that radiates several hundred times more than the uranium oxide standard she created. In honor of her homeland, she calls it polonium .

Polonium isotopes are intermediate products of the uranium-radium series , the latter producing the most common isotope 210 of polonium. Polonium can therefore be obtained from the processing of pitchblende (1000 tons of uranium pitchblende contain about 0.03 grams of polonium). It accumulates along with bismuth. It can then be separated from this element by means of fractional precipitation of the sulphides, because polonium sulphide is less soluble than bismuth sulphide.

In 1899, the Curies also succeeded in discovering the half-life of radioactive elements at polonium, where it is only 140 days, whereas the half-lives of the other elements examined were too long to be observed by them.

On December 21, 1898, the Curies, together with the chemist Gustave Bémont , found another radioactive element that they had enriched in a barium fraction. They call it radium , "the radiant". The physicist Eugène-Anatole Demarçay was able to confirm the new element spectroscopically. Like polonium, it is part of the uranium-lead decay series and is therefore present in uranium minerals. An important difference to polonium is the apparently constant activity. That of the Po subsides by half in 140 days, a half-life of 1600 years as with the Ra could not be measured with the means at that time.

In the years 1899–1902 the purification of radium was due, which turned out to be considerably more difficult than with polonium and was achieved with the help of fractional crystallization . To do this, she dissolved the barium chloride from the processing residues of the pitchblende in hot, distilled water and boiled the solution until the first crystals appeared. On cooling, part of the barium chloride then crystallized out, and beautiful, firmly adhering crystals (fraction A; top fraction) formed at the bottom of the dish, from which the supernatant mother liquor could easily be poured off after cooling. The mother liquor was then again evaporated to saturation in a second (smaller) dish. After cooling and decanting (pouring off the mother liquor), it received crystal fraction B (tail fraction). When comparing the activity of both crystal fractions, M. Curie found that fraction A was about five times more radioactive than fraction B. The reason for this is the lower water solubility of radium chloride compared to barium chloride, which is why it was (although it was only present in imponderably small amounts in the Solution was present) in the first crystal fraction of the barium chloride enriched by co-precipitation.

Even the measurement of activity with an electroscope, which seems primitive today, was enough to make the differences in quantity clear.

M. Curie had to repeat this process (dissolving, evaporating, crystallizing out, decanting) countless times and again and again with new amounts of radium-containing barium chloride in order to finally obtain a few milligrams of barium-free radium. In connection with the enrichment, the following hints from M. Curie are interesting:

Together with André Louis Debierne , she isolated pure radium in 1910 by electrolysis of a radium chloride solution . In Germany, the Braunschweig chemist Friedrich Giesel did pioneering work in the preparation of radium salts and generally in radioactivity research, for example in 1902 he succeeded in discovering actinium independently of Debierne.

Position in the periodic table

It was common in chemistry to only accept a newly discovered element as certain if it could be represented in its pure form and its atomic mass could be specified (another possibility was to identify the spectral lines). For this purpose, weighable quantities had to be available. However, these could not be obtained from the few kilograms of pitchblende.

The Académie des sciences turned to the Austrian Academy of Sciences with a request for help by leaving the waste dumps of Sankt Joachimsthal , which were considered worthless , from which the uranium content had already been removed (uranium was then used in the glass industry and was too expensive for the Curies ). After mediation by the famous geologist Eduard Suess , they fulfilled the request, only the transport costs had to be taken over by the Curies. In a first delivery they received around 1 ton, which was later followed by other deliveries. In retrospect, the value of the extremely expensive radium (one mg would have cost around € 1,500) was around € 150,000. Even under normal circumstances, the Joachimsthal pitchblende contained only 200 mg radium per ton, and there was much less in the residue.

Marie Curie was faced with the task of separating the radium-containing barium chloride (approx. 8 kg BaCl 2 per ton of processing residue ), which had already been isolated from the residues, in weighable quantities from the barium in order to be able to examine it by spectral analysis and determine its atomic mass. The individual steps are described in the chapter on the discovery of radium . Since Marie was physically stronger than her husband Pierre, she took over the greater part of the work with the heavy vessels of the ever-increasing amounts of solutions.

Another problem was the radioactive gas radon , which was produced during the decay of radium , which easily escaped, contaminated the laboratory and also disrupted the measurements with its decay products (polonium). In addition, it was harmful to health - the decay product polonium was deposited in the lungs as an alpha emitter.

Through extreme efforts, under adverse external circumstances, the Curies succeeded in producing a weighable amount of radium (about 100 mg), the activity of which was more than a million times higher than that of the original uranium oxide standard, much more than the Curies initially assumed had. In 1902 the Curies determined the atomic mass to be 225 u, which is very close to the modern value.