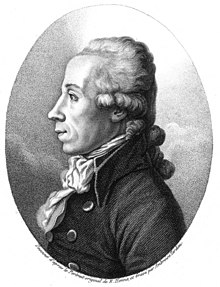 Klaproth discovered the elements uranium , zirconium , and cerium ; he was able to verify the discovery of the elements titanium , tellurium (first representation) and strontium (parallel to Hope ). As one of the most respected chemists of his time, he influenced chemical thinking in Germany. He supported the turning away from the phlogiston theory and the acceptance of the oxidation theory of Antoine Laurent de Lavoisier after appropriate attempts (1792).

Alongside Joseph Louis Proust , Klaproth was the analyst in the time before Jöns Jacob Berzelius . Klaproth introduced the balance as a standard analytical instrument. Coupled with the precise execution of the experiment, a creative approach to the separation walks and precise details of the test results, he made a special contribution to the analytical procedures. In gravimetry , he introduced the rule of drying to constant weight .

Martin Heinrich Klaproth was born in Wernigerode as the child of a poor tailor. After attending the city school in Wernigerode, Klaproth worked for six years in the Ratsapotheke in Quedlinburg . Between 1766 and 1771 he was an assistant in various pharmacies in Hanover (Hofapotheke), Berlin (Mohrenapotheke) and Danzig (Ratsapotheke). During his stay in Berlin, he received further training from chemists Johann Heinrich Pott and Andreas Sigismund Marggraf .

In 1771 he returned from Danzig to Berlin and worked in the pharmacy Zum Weißen Schwan owned by Valentin Rose the Elder , with whom he became friends. When Rose died a short time later, Klaproth continued to run the pharmacy and took on the upbringing of his employer's four children, including Valentin Rose the Younger . He set up a laboratory to carry out experimental investigations . From 1771 to the end of March 1772, Wernhard Huber worked as an assistant under Klaproth.

After his marriage to the wealthy Christiane Sophie Lehmann , a niece of the chemist Andreas Sigismund Marggraf , he acquired the Bear Pharmacy in Berlin in 1780, which enjoyed a good reputation until he left in 1800.

Then Klaproth worked as a proper chemist at the Academy of Sciences and as the successor to Franz Carl Achard . From 1787 onwards he worked as a professor of chemistry at the Berlin Artillery School, as a lecturer at the Collegium medico-chirurgicum and as a teacher at the Berg- und Hütteninstitut. At the beginning of the 1790s, Klaproth undertook experiments together with Alexander von Humboldt .

In the years from 1795 to 1815 he published six volumes of his "Contributions to the chemical knowledge of mineral bodies"; the minerals analysis was his special preference. Klaproth was also interested in determining the silver, copper and zinc content of metals, coins and analyzing glass. He also developed a digestion process for silicates (evaporation with potassium hydroxide, melting in a silver crucible). He found phosphates in urine, clarified the composition of alum and apatite , analyzed red copper ore , yellow lead ore , aragonite , lepidolite , dolomite , emerald , topaz , garnet and titanite .

He was the first to describe a number of as yet unknown or incorrectly classified compounds and carried out new precise qualitative and quantitative analyzes. He gave precise descriptions of the experiments, which also contained information on possible sources of error, which was not yet common at the time. At the same time he put together an immense mineral collection, which at the end of his life comprised 4,828 pieces and was bought by Berlin University after his death and is now in the Berlin Museum of Natural History .

In 1810, at the suggestion of Alexander von Humboldt, he was appointed professor of chemistry at the newly founded Berlin University . Jöns Jacob Berzelius was proposed as the successor to the chair of chemistry, but he declined the offer and proposed the young Eilhard Mitscherlich instead . Since 1805 he was an honorary member of the Russian Academy of Sciences in St. Petersburg . In 1815 he was elected a foreign member of the Göttingen Academy of Sciences .

In 1776 Klaproth became a Freemason and was accepted into the Berlin Freemason Lodge "Zur Eintracht" . He held the office of "National Grand Master" in the Prussian Grand Lodge "To the Three Worlds " . In the 1780s, the Lodge was under the strong influence of Rosicrucians , who believed in the transmutation of metals and prescribed alchemical experiments for the achievement of higher degrees. When Klaproth was asked for advice on attaining the ninth degree in one such attempt in 1787, he warned Prince Friedrich von Braunschweig that there was a risk that the laboratory he was housed would blow up, whereupon he ended his practical alchemical orientation and demolished his laboratory.

Klaproth died of a stroke on New Year's Day 1817 . He was buried in the Dorotheenstadt cemetery . The burial site is in the CAL department, G2.

Klaproth's son Julius Klaproth worked against his father's will as an orientalist and explorer. His daughter Johanna Wilhelmine was married to the mountain ridge Heinrich Carl Wilhelm Abich . The mineralogist, geologist and explorer Hermann von Abich was his grandson.

The Klaproth lunar crater is named after him.