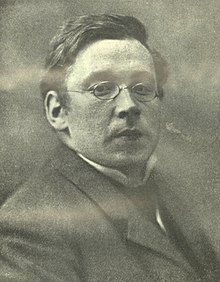 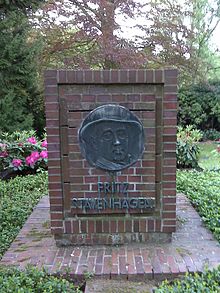 Fritz Ernst August Stavenhagen (born September 18, 1876 in Hamburg ; † May 9, 1906 near Hamburg) was a German playwright and storyteller . Today he is essentially only known because of his popular drama "Mudder Mews" , written in Low German .

Fritz Stavenhagen was born in Hamburg as the son of a coachman who came from Mecklenburg and initially trained as a chemist in Blankenese . In Munich and Berlin he continued his education as an autodidact and was soon able to make a living with literary sketches and stories for newspapers .

In Berlin, Stavenhagen was sponsored by Otto Brahm , the director of the Deutsches Theater , after the Schiller Foundation had already noticed him. With this financial support (Brahm offered him an annual salary), Stavenhagen's living situation improved.

In 1905 he became dramaturge at the Berlin Schillertheater , but was unable to pursue this activity for long due to his early death. Stavenhagen died in 1906 at the age of 29 of a gallbladder disease and was buried in the Ohlsdorf cemetery in Hamburg. In 1926, a tomb was built on his grave, for which Paul Hamann created the medallion .

After Stavenhagen's death, the influential völkisch - anti-Semitic literary journalist Adolf Bartels in particular campaigned for the spread of the narrow Low German theater work. Bartels Aesthetic Appreciation was published as early as 1907 and "secured the dramas the attention of a wider ... public. Stavenhagen's plays are" promising approaches, "according to Bartels," which give us the courage to purify German theater ... for its peers.

In Groß Borstel (a district of Hamburg since 1913), a Herme by the writer Fritz Stavenhagen was erected by the sculptor Hermann Georg Haas (1864–1912) in 1910. Today it stands at the Stavenhagenhaus , which was named after him in 1962.

Stavenhagen's most important work, the play Mudder Mews (1904) has occasionally been compared with the naturalistic dramas of Gerhart Hauptmann , who was the resident poet at the Deutsches Theater. The piece belongs to this day, partly in arrangements - e.g. B. by Günther Siegmund -, to the "classical" repertoire of Low German theaters.

De dütsche Michel (1905), a peasant comedy, is set at the time of serfdom in Mecklenburg. (See also: German Michel )

Like his dramatic work, Stavenhagen's narrative oeuvre is influenced by both naturalism and local art , as the collection of sketches and stories Grau und Golden , published in 1904, shows.

In 1956, the NDR produced a dialect radio play by Albert Mähl under the title: Fritz Stavenhagen - An audio series about the work and life of the first Low German playwright on the 50th anniversary of his death on May 9, 1956 with samples from "Der Lotse" , "Mudder Mews" and "De dütsche Michel".

Under the direction of Hans Tügel spoke among others:

It was first broadcast on May 7, 1956. The playback time is 60,000 minutes. The audio document is still preserved.