This article is about infantry - see Grenadier (disambiguation) for other meanings . 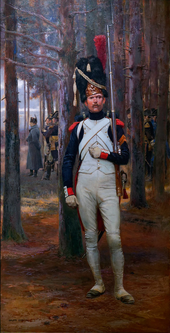 Le Grenadier , a grenadier of the Old Guard on guard, in the background Napoleon and his staff (oil painting by Édouard Detaille )

Grenadiers (initially also known as "grenades") have been infantrymen since the 17th and 18th centuries , originally armed with the forerunner of today's hand grenade and an elite of line infantry . In the German Wehrmacht and the Bundeswehr , the term was widely used also for having Mannschaftstransportwagen motorized or transport tanks infantry. By equipping them with armored personnel carriers , they were converted into tank grenadiers . The established during World War II storm grenadiers were on the local and urban warfare specialized. Today grenadiers belong to the mechanized infantry .

Prussian grenadiers from Infantry Regiment No. 6 around 1715 - illustration from the late 19th century 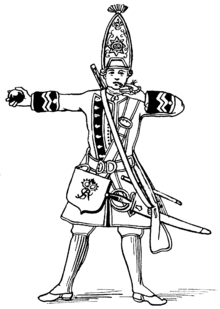 Since 1667, four soldiers in every French infantry company had to specialize in handling grenades and were therefore referred to as grenadiers. The share of grenadiers in the infantry increased in the following period, so that by 1671 every French battalion comprised a company of grenadiers. Since 1670 grenadier units were also set up in the Archduchy of Austria , in 1676 in Brandenburg and 1678 in England , which was followed by most of the other European states by the end of the 17th century. The term was adopted from French into German at this time . For the formation of a grenadier unit, the strongest, most skilful and often the greatest soldiers were selected (one example was the "Tall Guy" of Friedrich Wilhelm I of Prussia ).

The grenadiers formed a military elite . They were entrusted with particularly dangerous tasks during sieges and used in the main focus of the fight in battle. Their armament included a dozen or so grenades, a musket with a bayonet and a saber . Often one could distinguish the grenadiers from the other soldiers purely outwardly: In order not to be hindered when throwing the grenades, they always wore narrow headgear (originally the simple camp cap) instead of the wide hats ( tricorn ) that were common at the time .

As early as the 18th century, hand grenades were gradually abolished; the grenadiers remained elite units. Their original pointed hats developed - as a status symbol and to make the wearer appear taller - high and sometimes very heavy grenadier hats with metal shields or made of fur, to which a chin strap was necessary. Because it was difficult to take off these hats as a greeting, a special concession to the grenadiers was the so-called "grenadier salute" (the mere hint by putting one's hand on the hat). For reasons of prestige, this greeting was adopted by more and more units and has become the most widespread military honor worldwide today.

The "grenadiers of the old guard" of the Imperial Guard of Napoleon I , who enjoyed the reputation of invincibility until the Battle of Waterloo, became particularly famous .

Since the troop designation "Grenadiers" was only used for elite troops with selected personnel substitutes, there were only a few regiments in the armies of the German Empire (1871-1918) who carried them in their name.

From this were founded with the accession to the North German Confederation:

Bavaria and the other federal states had no grenadier regiments.

In the Wehrmacht from October 15, 1942, the previous "riflemen" and "upper riflemen" of the infantry were referred to as "grenadiers" or "upper grenadiers". Furthermore, almost all names have been changed accordingly. So the "infantry regiments" became "grenadier regiments". The measure should serve to raise morale. Only from division level did the divisions keep their names. After the assassination attempt on Hitler in 1944, newly established divisions were referred to as Volksgrenadier divisions . These were conventional infantry divisions and had no connection with the Volkssturm . 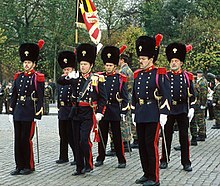 German recruits in the rank of grenadier. Grenadier is the designation for the lowest rank in the guard battalion at the Federal Ministry of Defense

The Bundeswehr took over the term Panzergrenadier , which was created in 1942, but used it to designate units of the Panzergrenadier troop whose fighting style corresponds to that of the earlier Dragoons . Before the arrival of the HS 30 , almost all infantry battalions in Army Structures I and II were motorized grenadier battalions (mot), which could be moved with the Borgward personnel carrier, later the Unimog. Up to Army Structure IV there was a grenadier company (MTW) ​​in each Panzergrenadierbataillon, which led the fight dismounted in defense from or in attack around field positions as well as in local and house combat.

Panzergrenadier (PzGren) is the lowest rank of soldier in a tank grenadier battalion of the German Bundeswehr .

Grenadier (Gren) is the lowest rank of the army uniform bearers in the guard battalion at the Federal Ministry of Defense . He corresponds to the rank of rifleman, radio operator, armored infantryman, etc. ( → see here ) of other branches of service.

See also : Section "Bundeswehr" in the article on the collective term "Soldier"

In the Austrian Armed Forces , the motorized infantry units assigned to the tank units are known as tank grenadiers .

After General Henri Guisan had attended a hand -to-hand combat demonstration prepared by Captain Mathias Brunner on the Schwägalp in 1942 with volunteers from Field Division 7 from Eastern Switzerland , in February 1943 he ordered the formation of engineering companies at regimental level. They were renamed Grenadier-Kompanien in 1943 with the words: "Modern warfare puts infantry and light troops before combat tasks that require the use of specially trained and equipped shock troops."

In the Swiss Army , the grenadiers form a large part of the KSK . Grenadier training is one of the most demanding and extensive military training courses in the Swiss Army. When recruiting, +90 / 125 points are required in the sports test. During the 23-week basic training ( recruit school ), the grenadiers in Isone in the canton of Ticino receive specific training that is intended to enable them to be deployed later as a so-called “Special Operation Capable (SOC)”. This includes special training processes such as hand-to-hand combat, local and urban combat, instant-action combat techniques, survival and movement in enemy territory and in the mountains. In addition, there are specialist training as sniper , reconnaissance , medic (grenadier unit paramedic), PAL / Mg specialist, mine thrower, message / transmission specialist, sprinkler, bazooka specialist, driver / LMg gunner or command / troop chief. The training to become a grenadier demands a high degree of sportiness, physical and mental performance, extreme motivation and enormous stamina. For this challenging function, only volunteers can be considered who provide the high, required performance in the recruitment. During the first 11 weeks of the grenadier recruit school, a tough selection from 24 selection tests takes place, which results in a reallocation in the case of character, technical, social, psychological or physical unsatisfactory performance. This redistribution takes place within the army or, above all, in the operational detachment of the AZSK.

The three grenadier battalions of the grenadier command are infantry units that are used for offensive operations such as attacks to paralyze or destroy targets of operational and tactical importance in depth, interrupt lines of communication and obtain key information. Most of them are made up of militiamen.

The grenadiers also have a good cohesion outside of duty. Their distinguishing feature is the typical bomb as a badge. Grenadier Day was launched in 2007 . The annual event demands the skills as a grenadier and cultivates camaraderie with one another.

In France , each line regiment until 1868 had a company named grenadiers.

In Italy there is the Granatieri di Sardegna (1659), a traditional Guard Grenadier troop of Piedmontese origin, which take on guard and representative tasks in Rome . The soldiers of the troop wear a bearskin hat.

Since grenadiers were mostly regarded as elite units, they are still often found in guard regiments or companies, where they can be recognized as grenadiers by their characteristic, high caps, such as the British Grenadier Guards or the Danish Royal Guard , both of whom wear bearskin hats.