Hamlet is an opera in five acts by Ambroise Thomas based on a libretto by Michel Carré and Jules Barbier , based on the French adaptation by Alexandre Dumas the Elder. Ä. and Paul Meurice based on the tragedy Hamlet by William Shakespeare . The first performance of the French first version took place on March 9, 1868 in the Salle Le Peletier of the Paris Opera . A second version in Italian premiered on June 19, 1869 at Covent Garden Opera House in London.

The opera takes place in Denmark during the Renaissance at Helsingør Castle. Prince Hamlet learns one night through the ghost of his recently deceased father that his uncle Claudius is the murderer and that Hamlet must seek revenge. In order to convict the killer and prepare his revenge, Hamlet pretends to be insane. His fiancée Ophélie commits suicide after she is desperate about Hamlet's madness and Hamlet no longer wants to marry her when he learns that her father Polonius is an accomplice in the murder. Finally Hamlet stabs Claudius to death and the people proclaim him king.

The court celebrates the wedding of Gertrude, the late king's widow, to his brother, Claudius. Claudius crowns Gertrude queen again. Prince Hamlet, son of Gertrude and the late King, only complains that his mother has remarried. Ophélie joins them and they both swear their love together. Laërte, Ophélie's brother, joins them and announces his departure for Norway. He entrusts Ophélie to the care of his friend Hamlet. Laërte and Ophélie want to go to the banquet, but Hamlet refuses to attend. Soldiers and servants prepare the banquet, Horatio and Marcellus tell them about the ghost of the deceased king, whom they claim to have seen the night before at the castle wall. You leave the banquet to tell Hamlet about it.

Second picture. Esplanade, in the background the illuminated castle, night

Horatio and Marcellus meet Hamlet at the walls. The ghost appears and Hamlet sends his friends away. The ghost declares that Claudius murdered him with poison. He orders Hamlet to take revenge, but to spare his mother. After the ghost disappears, Hamlet vows revenge for the murder of his father.

First picture. The gardens of the castle

Ophélie is reading a book and is concerned about Hamlet's behavior. Hamlet comes by, but leaves without a word. Queen Gertrude arrives, Ophélie asks her to be allowed to leave the court, which Gertrude refuses. After Ophélie leaves, Claudius enters. The Queen says Hamlet knows about the plot, but Claudius assures her otherwise. Hamlet appears and plays the madman. Claudius extends his hand to Hamlet in friendship and asks Hamlet to call him “father”, which Hamlet refuses. He replies that he has hired an acting company that will play that evening. The actors arrive and Hamlet hires them to play "The Murder of Gonzago" and then starts a drinking song.

The royal couple and their entourage have gathered in the ballroom. The actors begin with their play, about which Hamlet relates. After they have reenacted the murder of the king and the "murderer" puts on the crown, Claudius interrupts the performance in horror. In front of the shocked crowd, Hamlet accuses Claudius of murder.

Room in the Queen's apartments with a prayer chair

In the queen's room, Hamlet is filled with self-doubt (“to be or not to be”). Claudius comes in and Hamlet goes into hiding. Claudius, filled with repentance and fear, falls on his knees in prayer. Hamlet tries to stab him, but withdraws, believing Claudius' soul would be forgiven if he were murdered while praying. Claudius calls for Polonius and their conversation reveals Polonius complicity. Both leave and Hamlet is plagued by vengefulness again. Gertrude and Ophélie come in and Gertrude tries to convince her son to marry Ophélie, but Ophélie refuses. Ophélie gives Hamlet her engagement ring back and leaves. Hamlet urges the Queen to admit her guilt, but she resists. When Hamlet threatens her, the ghost reappears and reminds his son to take care of Gertrude.

Rural area with trees, a lake in the background, daybreak

After Hamlet's rejection, Ophélie goes mad and drowns herself in the lake.

Elsinore cemetery, tombstones under cypress trees, a chapel on the right

Two gravedigger dig a grave. Hamlet appears and asks who the grave is for, but the men don't know. Hamlet regrets his behavior towards Ophélie, but he is not yet aware of her death. Laërte arrives and challenges Hamlet, whom he blames for his sister's death, to a duel. Hamlet is wounded, but Ophélies' funeral procession interrupts the duel. Hamlet collapses over Ophélie's lifeless body when the ghost reappears. He again orders Hamlet to take revenge, and Hamlet stabs Claudius to death. The people proclaim Hamlet the new king.

The orchestral line-up for the opera includes the following instruments: 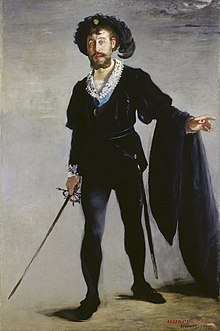 The libretto of Thomas' opera Hamlet is by Michel Carré and Jules Barbier . It is based on the play by Alexandre Dumas the Elder, published in 1847 . Ä. and Paul Meurice , which in turn had William Shakespeare's tragedy Hamlet from around 1602 as a template.

Thomas completed the first version as early as 1863. It consisted of four acts and was probably intended for the Théâtre-Lyrique in Paris , where it was not performed for unknown reasons. The work was only accepted by the Paris Opera four years later . Since the operas there required five acts, the fourth act was split up. The original final tableau has now become an independent fifth act. In addition, Thomas replaced the ballet with a larger one in the fourth act.

The German premiere in a translation by Wilhelm Langhans took place in Leipzig in 1869.

On June 19, 1869, a second version of the opera with an Italian translation of the libretto by Achille de Lauzières was premiered at Covent Garden Opera House in London. This version ends tragically: Hamlet is not crowned king, but dies. However, due to opposition from the English public, the production was canceled after a single performance.

Hamlet is next to Mignon Thomas' greatest success and was played worldwide during his lifetime. In 1911, the Theatro Municipal de São Paulo opened with a performance of the opera.