Worry-free house is an architecturally significant mansion with a castle-like mansion on Augustusweg 48 in Oberlößnitz , today Radebeul . The property consists of a main house and other buildings in a park or garden. It was built for the Dresden banker and baron Christian Friedrich von Gregory according to plans by the Dresden architect Johann August Giesel in the Dresden braid style, a late Baroque architectural style in the transition from Rococo to Classicism . The name “Sorgefrei” is reminiscent of the Sanssouci Palace in Potsdam ( French: sans souci = without worry ). 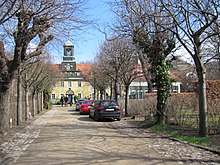 After the extensive restoration work during the 1990s, the property is now used as the country hotel Villa Sorgenfrei ; the award-winning Atelier Sanssouci restaurant is located in the former garden room . 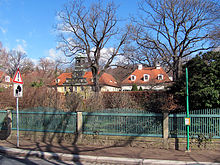 Manor house with tower, the garden hall on the right and the gardener's house on the left. On the far left is the neighboring Villa Steinbach . Seen from Eduard-Bilz-Platz across the property of the Alfred Schädler family house (far right) .

The approximately 7,000 m² listed building complex consists of a two-storey mansion with a U-shaped floor plan, to the right of the two-storey garden hall and to the left of it the single-storey gardener's house. Behind the gardener's house is the somewhat larger one-story shed with stables (also referred to as the press house ), behind the hall there is another, somewhat smaller, one-story outbuilding. An avenue leads through the enclosure with gate system to the manor house, next to which the lower pleasure garden is located on the right in front of the garden hall . Behind the group of buildings is the upper pleasure garden. The property was already presented in detail by the art historian Gurlitt in his fundamental inventory in 1904 , as well as in the Dehio rapid inventory of 1905 . The ensemble was also a listed building during the GDR era : in 1973 as "Haus Sorgenfrei with garden sculpture" in the highest value group I, in 1979 in an even larger ensemble together with the former wineries Haus Steinbach and Bennoschlößchen to the west .

The two-storey mansion with a hipped roof has a roof structure in the middle with a domed bell tower with a knob and a weather vane. There are festoons , vase crowns and an inscription "CAREFREE" on the structure. Above it is a clock adorned with cornucopia . The weather vane shows the Gregory griffin. The completely plastered building has a massive ground floor and a half-timbered upper floor. The wooden tower is clad with sheet metal. In the basement of the building there are two foundation stones with the inscription “CF Gregory. Anno 1783 ". There is a decorated portal in front of the building. In front of this there is a semicircular square, on which the access avenue opens. 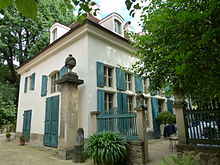 The cleaned, two-story ballroom building has about the same eaves height as the main building. The garden room in it takes up the entire length and extends over both floors. The facade to the lower garden consists almost entirely of tall windows with a French window in the middle and space for the opened shutters. The building, dated 1789, has a hipped roof with high dormers with arched arches. In the porch at the back are the stairs to the upper and attic floors.

The gardener's house to the left of the main house, dating from 1787, has a hipped roof with dormers, in front of the building there is an attachment and a terrace.

The plastered remise behind the gardener's house is also referred to as the coach house or press house. It dates to 1788 and has two high, arched gates.

In front of the garden hall there is a garden veranda, from which a staircase leads to the French gardens of the lower pleasure garden, in which there is a fountain with a sphinx , surrounded by old trees.

The upper garden behind the building rises to terraces, in the middle a staircase leads through vase-crowned pedestals. The entire property is considered a work of landscape and garden design .

Already in the early 18th century there was a winery at this point, at the foot of the local mountain , which in 1770 came into the possession of the Berlin merchant Albert Friedrich Gregory (1728–1776) through inheritance from his wife. In the year of his death in 1776, he expanded the property by purchasing the neighboring Spinshirnschen vineyard . His son, the Dresden banker Christian Friedrich von Gregory, who was later ennobled as a baron, had the ensemble built in the Dresden braid style on the majority property of his family in the years 1783 to 1789 using parts of the previous building. In the following years, Gregory built a dragon temple on the Oberberg , which was built in the spirit of Romanticism based on the example of the chinoiseries at Pillnitz Castle . This temple, which the Oberlößnitz painter Herbert König captured in the picture around 1866, was sold and demolished at the beginning of the 20th century due to the rebuilding of the areas.

Herrengut Sorgenfrei, painting from 1829. On the right is the path to the dragon pavilion on the northeastern property line. (Even further to the right: the Straken , past Haus Albertsberg . Far left Haus Steinbach , above on the slope edge the Spitzhaus )

With the acquisition of the neighboring vineyard property, which belonged to the Villa Wach , as well as other vineyards in 1790/1791, Gregory created the largest single vineyard property in Oberlößnitz with around 10 hectares for a long time. In 1798 he also acquired Wackerbarth Castle in Niederlößnitz, and in 1799 the neighboring vineyard of the fly whisk . The latter two went to August Josef Ludwig von Wackerbarth in 1808 .

In 1920 Colonel v. Gregory bought the property to his nephew, the Radebeul architect Alfred Tischer , who built a single-family house in 1933 on the neighboring property to the south ( Augustusweg 46 ) and the neighboring property to the east ( Eduard-Bilz-Straße 54 ). In 1940 Tischer sold the property from Haus Sorgenfrei on, as repairing the structural damage that had occurred over the decades exceeded his means. In 1943/44 the property was owned by the Leipzig lawyer Ernst Schubert. Paul Ahnert, father of Gussy Hippold-Ahnert , ran a corsetry workshop there in the garden house.

After the Second World War, the property came under the administration of the city of Radebeul, which divided the main building into several individual apartments. The painter couple Erhard Hippold and Gussy Hippold-Ahnert, who continued to run their father's corsetry workshop in the garden room to secure their livelihood, and the ornithologist Rudolf Pätzold lived there . Even Robert Lam lived in the house Sorgenfrei. In the early 1970s, the municipal building management took over the property and carried out the first security and value preservation measures.

After the reprivatisation at the beginning of the 1990s, the ensemble was renovated from 1994 to 1999 based on the historical model; it represented an achievement not comparable to the usual categories of monument restoration. The client at the time, the Hanson family, received the Radebeul builder award in 2000 in the category special award for the renovation of a culturally and historically valuable ensemble as well as the federal award for handicrafts in monument conservation . After the foreclosure auction in 2004, the property came into new hands, which subsequently changed.

There is a small hotel in the manor house and a restaurant in the garden house. In May 2015, the facility was taken over by Stefan Hermann , who was the patron and head chef in Dresden with a Michelin star and 17 Gault Millau points in the bean & beluga, which was closed in 2019 due to the expiry of the lease . The Hotel Villa Sorgenfrei has been rated First Class in the Gault Millau since 2011 . The Atelier Sanssouci restaurant has been rated with two chef's hats in Gault Millau since 2016 , and 16 points in 2017/2020. In February 2019, his Atelier Sanssouci restaurant was also awarded a Michelin star under chef Marcel Kube .

The park is open to visitors.