Main Campus Schneidershof from the northeast

Main entrance to the main campus

The Trier University has nearly 8,000 students and 160 professors one of the largest colleges in Rhineland-Palatinate . It is spread over several locations in Trier (main campus Schneidershof, Irminenfreihof and Paulusplatz), Birkenfeld ( environmental campus Birkenfeld ) and Idar-Oberstein (precious stones and jewelry). It is a member of the European University Association (EUA) .

Logo of the former Rhineland-Palatinate University of Applied Sciences

Logo of the Trier University of Applied Sciences 2003–2012

The Trier University of Applied Sciences has two predecessor institutions: the building trade school and the art school.

The building trade school was founded in 1830 for the training of architects and civil engineers. The original location was at the Irminenfreihof. After the Second World War it was called the State Engineering School for Construction Trier . In the early 1960s there were three specializations: building construction, civil engineering and building services. The latter, however, was not added until 1959.

In 1884, leading and long-established Trier families and tradespeople founded an art and trade association for the artistic training of tradespeople. The trade school was founded in 1907 with the support of the Deutscher Werkbund and at the 25th foundation festival of the Trier Arts and Crafts Association in 1909, it was renamed the state craft and arts and crafts school .

Together with the vocational training school, their task consisted predominantly in the artistic, scientific and technical further training of practically experienced craftsmen and professionals as well as in the preparation of building craftsmen for further studies at the royal building schools. In 1912 the new school building on Paulusplatz was finally inaugurated. Between the two world wars and during the Nazi rule, the school was subjected to many constraints and was renamed several times. After the war, the institution on Paulusplatz traded under the name Die Trier Werkschule .

The Rhineland-Palatinate University of Applied Sciences was founded in 1971. At the same time, their Trier department was created. It initially consisted of the departments of architecture, civil engineering, electrical engineering and mechanical engineering as well as the courses in communication design, fashion design and interior design in the field of design.

In 1980 the vacant buildings of the University of Trier at the Schneidershof location were taken over. However, the traditional locations remain in the possession of the university and are now used by the design department.

Trier University of Applied Sciences (since 2012)

With the publication of the new constitution under President Jörg Wallmeier in Publicus 9/2012 on September 12, 2012, the official name is Trier University .

Trier University, main campus Schneidershof. View from the sports fields to the east over the campus 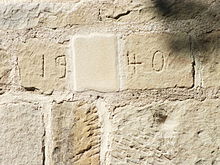 Stone with the year

On June 19, 1936, the city of Trier signed a contract with the Reich Ministry for Science, Education and National Education to build a college for teacher training . This was opened in the summer of 1936 in the presence of the Reich Minister of Education, Bernhard Rust, with a large, two-day celebration that was strongly influenced by the National Socialists. After 138 years Trier was once again the location of a university. The first students studied 1936-1940 first in the temporary premises of the city's palace ring.

The first planned location on the Petrisberg was considered too remote. After initial concerns, it was decided to build the teachers' college on the Schneidershof, to shut down the dilapidated youth hostel located there and to build a new building at another location. The planned buildings were built in the immediate vicinity of what was then known as the Hühnlein Stadium , today the Waldstadion, in the style of National Socialist architecture . The foundation stone for the university buildings was laid on June 9, 1939. With the beginning of the Second World War, the university was closed on the grounds that the young students had to take up arms to support the fatherland . On October 30, 1940 a no longer university-shaped teacher training institute was reopened. The students returned to train the youth of the fatherland . Since the beginning of the war, female students were also allowed to attend lectures.

From 1937 to 1940 there were various locations in Trier: u. a. Plans to build a National Political Educational Institution (Napola) also for the Schneidershof , but this was not implemented and was discontinued in 1940 due to the war.

The buildings that have been preserved are today's buildings J, K, L, O, the sports hall (building T) and the director's villa, today's kindergarten building from which the entire area could be seen at that time, which is not today due to the trees in the kindergarten garden more is given. The entire building complex was under the ideology of National Socialism. The sports field was the focus of the facility, the gymnasium was opened up to the sports field by a ten-axis pillar loggia , and at building L there is a foundation stone with the year 1940 and a swastika covered today with a plate and some fine plaster at a height of a good 2 m . The four two-storey buildings J, K, L, O, which were then used as classrooms and living rooms, stand on lining walls high above the Sirzenich Bach valley , are made of sandstone blocks and have relatively flat hipped roofs. The buildings are connected with slightly curved covered corridors. Due to the war, the facility was not completed. Above all, the main building is missing.

The buildings are now used by the university administration and the business and IT departments. In the buildings, the former attic was expanded and is used for offices.

The extensions for the college of education

Building from the 1950s: lecture hall building, data center, auditorium, cafeteria (from left to right), the Berghotel Kockelsberg shines above the university

Plastic FH logo and canteen structures before the 2014/15 redesign

After the Second World War, the buildings were used as a teacher training college from 1950 to 1969 .

While teacher training institutions were set up in the immediate post-war period , mainly in small towns less affected by war destruction, from 1950 onwards the locations were mainly concentrated in the country's traditional cultural centers. In Trier, the newly founded Pedagogical Academy found a place in the then new buildings on the Schneidershof. Only Catholic teachers were trained. It was not until 1964 that the exclusivity was relaxed; since then a small number of non-Catholic students have also been allowed to attend. The Protestant teachers had colleges of education in Worms , Kaiserslautern and, since 1964, Neuwied .

During this time, there were significant expansions to the existing building stock, whereby existing foundations or shell structures could be used in some cases. In the first construction phase in the 1960s, the lecture hall building H, the building F with the auditorium and the building G of today's main entrance with a typical post-war facade were built in almost identical architectural style. A chapel , which no longer exists today, was set up on the first floor of this building . Three of the original seven stained glass windows in the chapel are now on display in the cafeteria . The cafeteria building E was built in contemporary architecture, which could be kept in its original color scheme and furniture until 2006.

Location of the University of Trier

A day-care center has been set up in the former director's villa, which is primarily available to university members.

Use by the University of Trier

At the beginning of the 1980s, a machine hall was built for the mechanical engineering department . The next and so far last new buildings were the officially provisional building X in container construction for the IT department in 2014 as well as the heating and power plant that works with wood pellets in 2015.

After most of the offices and seminar rooms in the old buildings were slightly renovated in the 1980s when the then Rhineland-Palatinate University of Applied Sciences took over, the entire building stock has been fundamentally renovated since around the year 2000, taking into account the issues of monument protection and energy-saving Accesses designed to be barrier-free.

The new buildings had to be removed from asbestos. a. the entrance area, the canteen and cafeteria have been completely renovated. The previously oil-fired heating system has been replaced by a wood pellet cogeneration plant. The dilapidated parking garage was torn down and replaced by two parking spaces on the same ground. The forest between the parking lot and the university buildings was largely cleared. In 2012–2014 the outdoor facilities of the old buildings were extensively redesigned. A temporary building in the shape of a container was erected on the site of the sports field - originally with athletics facilities and a soccer field . A beach volleyball court , boules lanes and small playing fields have been created on the rest of the site . The tree population in front of the buildings was also significantly reduced. A ramp for barrier-free access was integrated in the forecourt of the sports hall. Of the new buildings, building D was renovated, building C is being renovated in 2015, buildings A and B are still waiting for it.

The largely renovated old buildings are used today (2015) by the IT and economics departments, the university administration (with the student secretariat), the computer center and the student union (cafeteria, offices). There is also a lecture hall building with three lecture halls of different sizes. The new buildings are used by the technical departments, FSVO and the library. The former sports hall is divided into two parts. One part is still available for sports, the other part serves as a provisional lecture hall.

The building that characterizes the square was built from 1909 onwards according to a design by the city building officer Balduin Schilling and with the assistance of the departmental builder Peter Monshausen for the then crafts and arts and crafts school and inaugurated in 1912. The three-storey angular building with a slate hipped roof , opposite the Pauluskirche, occupies the entire north side of Paulusplatz. The school is one of the oldest reinforced concrete skeleton buildings in the old town of Trier and is a remarkable representative of a factually influenced neo-classicism. 49 ° 45 ′ 31.6 "  N , 6 ° 38 ′ 7"  E49.758777777778 6.6352777777778

It is a building of the former Dominican convent of St. Catherine. The buildings that have been preserved are largely the result of an expansion and renovation of the monastery in the 18th century. Its builder was Johannes Seiz . After being used by the French in the late 18th century, the monastery was closed in 1802. The buildings came into the possession of the United Hospitien, which set up a hospital there (1806-1819). Under Prussian leadership, the hospital continued to be used as a military hospital until 1918. The southern wing was built in 1910 after the former monastery church was demolished.

In the 1930s, the building was used as the “Higher Technical State College for Civil Engineering”, with interior renovations also taking place and all roofs being renewed. After the Second World War, the building was used as a state building school. The building was last renovated at the turn of the millennium and has since been used by the design department for the fashion design course. The new design course Intermedial Design has been located there since 2008, which has been run under the name Intermedia Design since 2012. 49 ° 45 ′ 32 "  N , 6 ° 37 ′ 57"  E49.758888888889 6.6325

The Trier University of Applied Sciences is organizationally divided into seven departments . Two of these departments are located on the environmental campus Birkenfeld and the gemstone and jewelry design course is located in the gemstone town of Idar-Oberstein. In detail, these are the departments:

The Construction + Life department is made up of the fields of civil engineering, food technology and supply technology.

The department's research activities focus on collaborations with the Luxembourg financial center.

Degree courses at the Birkenfeld location

Professors and other university lecturers