Hugo Münsterberg (born June 1, 1863 in Danzig , † December 16, 1916 in Cambridge , Massachusetts ) was a German-American psychologist and philosopher . Together with William Stern , Walter Dill Scott and Jean-Maurice Lahy , he was one of the founders of applied psychology and is one of the earliest film theorists.

Hugo Münsterberg's father Moritz was a businessman; he imported wood from Russia and exported it to England. His mother Anna was an artist and brought Hugo to play the cello and write poetry as a child. Among his siblings were the businessman and politician Otto Münsterberg (1854-1915), the poverty scientist Emil Münsterberg (1855-1911) and the entrepreneur and philologist Oskar Münsterberg (1865-1920).

Hugo Münsterberg studied philosophy, psychology and medicine and received his doctorate in 1885 at the founder of psychology as an independent science Wilhelm Wundt at the University of Leipzig to Dr. phil. (Topic: "The doctrine of natural adaptation in its development, application and meaning"). In 1887 he became Dr. med. at the University of Heidelberg and completed his habilitation at the University of Freiburg . In this work, Die Willenshandlung , Münsterberg dealt with the organic processes that convert a volitional decision into an action. He lamented the "diversity of theories" in this area - a sign of the ignorance of naturalists. One does not know something very fundamental about the will, namely how it generates “infinite energy from finite material mass”. Münsterberg believed, in keeping with the spirit of the times, that the “mechanics of atoms” would one day explain a lot. In essence, his habilitation was a sober assessment of the current state of knowledge about the "finer connection between motor nerve and muscle on the one hand, and central organ [brain] on the other."

"How could a nervous apparatus come into being that is set up in such a way that, despite the infinite variety of external conditions, it allows the stimuli to trigger those movements at every moment that suitably correspond to the conditions of the outside world?"

Münsterberg also dealt with Darwinism in his work and looked at the animal world. They are irrelevant for his research

"Lowest, the movements necessary to generate the offspring [...] such as looking for and calling the sex animals, the movements to hold on to fertilization, etc."

From 1888 to 1892 he taught in Freiburg as a private lecturer and set up a psychological laboratory. Münsterberg's diverse empirical interests and teaching activities attracted a growing number of students, including many from the United States.

Münsterberg was only a few years in Freiburg and developed a very creative and effective activity there. Wilhelm Windelband and Alois Riehl had already given lectures on psychology and psychophysics before him . But it was Münsterberg's habilitation that made the transition to empirical psychology. Now the institute offered “experimental psychological work” for beginners and advanced learners, lectures on “general psychology”, “psychology including social psychology” and “hypnotism”. In his apartment, Münsterberg ran a "psychophysical laboratory", from 1889 with a grant of 200 marks annually from the ministry. If one regards this budget-like donation as a criterion for institutionalization, then Münsterberg's laboratory in Germany was the fourth laboratory to be established in the gradually emerging field of psychology. In addition to his laboratory experiments on perception and motor skills, Münsterberg began to examine Freiburg students and measure differences in elementary differences in ability. Ahead of his time was his appeal, written in 1891, on the tasks and methods of psychology :

"This demand is that no medicin, lawyer, theologian or pedagogue may transfer from the university to the profession without having proven his knowledge of psychological phenomena in a thorough examination independent of philosophy." (1891, p. 272 ).

As an advocate of the psychological effects measurable with technical devices, Münsterberg was an opponent of the psychoanalysis of his colleague Sigmund Freud, who was a few years older than him . For him, the unconscious belonged just as little in psychological science as the drive . He subsumed the instinctual life under "instinct":

“Today the concept of instinct no longer has any physiological or psychological meaning; it is a purely biological term. [...] The biologist may consider the man's wooing of the woman from the point of view of bringing about offspring; the psychologist and physiologist, however, has nothing to do with it. "( Grundzüge der Psychologie , 2nd edition, 1918, p. 466)

In this standard work, published in 1900, Münsterberg also introduced the law of conservation of energy for psychology, derived from physics, but considered it questionable whether this could also be applied to inorganic processes (such as those in the brain). Perhaps, according to Münsterberg, the equations of forces in physics apply to physical-physical interactions, but not to physical-emotional or mental-emotional.

In dealing with the basics of psychology , the economist and sociologist Max Weber developed part of his theory of sociology and cultural studies. 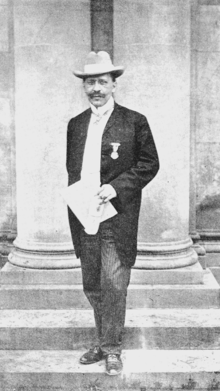 Hugo Münsterberg, presumably at a science summit he organized on the occasion of the World Exhibition in St. Louis in 1904

Through the mediation of William James Münsterberg was, since 1892 Associate Professor (Adjunct Professor) of Philosophy in Freiburg, a visiting professor at the Harvard University invited to Boston from 1892 to 1894. After an interlude in Freiburg from 1895–1897, where he was not or could not be kept by offering a full professorship, Münsterberg finally accepted the call to Harvard to develop experimental psychology in accordance with James' wish. In 1902 Münsterberg was elected to the American Academy of Arts and Sciences .

Münsterberg set up a large and well-equipped laboratory for experimental psychology based on the model of Wilhelm Wundt. During this time a discovery was made that is linked to his name: the so-called Münsterberg Illusion is a special optical illusion that arises when looking at a certain grid pattern. With the establishment of the laboratory he had fulfilled the wish of William James, who turned to other psychological and philosophical fields. However, after this development phase, Münsterberg's interests also changed. Instead of basic experimental research, he increasingly concerned himself with the possible applications of psychology, which still hardly played a role in Wundt's Leipzig Institute. He took over the term psychotechnology coined by William Stern . While Stern primarily thought of educational and therapeutic effects, Münsterberg means an umbrella term for all of applied psychology:

"Psychotechnology is the science of the practical application of psychology in the service of cultural tasks." (1914, p. 1)

He founded work psychology and organizational psychology with his book Psychology and Economic Life (1912) . It deals with professional learning, personnel selection and career advice. He developed the first professional aptitude tests for tram drivers and telephone operators, for example, and also took up the Ranschburg phenomenon in his work-psychological research in order to investigate the effects of monotony at work . He was also interested in other applied areas such as advertising psychology and educational psychology . In psychotherapy he dealt with suggestion and hypnosis . In the field of forensic psychology , he developed criteria for the credibility of witness statements and suggested the development of the so-called lie detector , which, based on the measured physiological effects, etc. a. on pulse , breathing , blood pressure , should help to distinguish true from false statements. His investigations into the psychology of film ( The Photoplay (1916)) contain the first theory of this new medium.

Münsterberg's philosophical interests were directed towards general epistemology , u. a. the relationships between the natural sciences and the humanities, and the philosophical derivation and justification of values and general morality . His philosophy of values tied directly to Fichte . His commitment to the practice of psychology was connected with many trips and with the public, which also contained criticism of this advance of psychological ideas and the not easily convincing applications. On the other hand, Münsterberg enjoyed a high reputation, at least in part of the professional world and the public. He was repeatedly invited to the White House until the beginning of the First World War led to a change of opinion and political controversy.

Some of the devices from the Freiburg laboratory equipment came to James Sully at University College London, and some were used in Freiburg, but did not survive the First World War. From 1897 Münsterberg was professor of psychology in Boston and from 1905 director of the psychological laboratory. In 1898 he was elected President of the American Psychological Association . He stayed in Germany again from 1910 to 1911, as an exchange professor at the University of Berlin. Münsterberg tried to strengthen German-American relations and was a co-founder and first director of the America Institute in Berlin (1910/11). As a patriot, he suffered greatly from the increasing deterioration in the relationship between the USA and Germany during the First World War. In 1916 he died in the middle of a lecture. Hugo Münsterberg's colleague, the founder of parapsychology Max Dessoir , described the confusion of the last days of life as follows:

He died when Germany's peace proposal had just been reported to America. Happy about the emperor's intervention, in the sure expectation of an early peace, he said goodbye to his wife on a blue and white snow morning - half an hour later, in the middle of a lecture, he collapsed unconscious and was dead. The fatherland lost a brave champion, the Science a leader, family a good and loyal person, life a staunch follower.

Münsterberg was married to the Strasbourg painter Selma Oppler (born June 1, 1867) since 1887; The marriage resulted in two daughters, Margarethe and Ella. In the United States, the family last lived at 7 Ware Street, Cambridge, Mass.