The IG-Farben-Haus or the Poelzig-Bau (also IG Farben-Haus or Poelzig-Ensemble , formerly also the IG Farben building , IG Farben complex , IG high-rise , Farben Building , officially General Creighton from 1975 to 1996 W. Abrams Building ) in Frankfurt am Main was designed by Hans Poelzig and built as the central administration for IG Farben from 1928 to 1931. After the end of the war, the American military administration moved there. Since 2001 the building has housed part of the Goethe University .

South facade and main entrance of the Poelzig building

Entrance hall with a view of the casino through the Eisenhower rotunda. 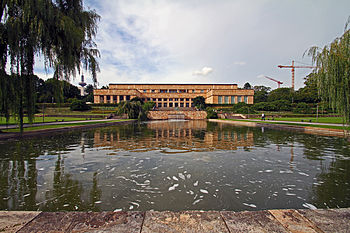 The casino from the back of the main building.

Back of the main building as seen from the casino. Fountain, nymph sculpture, rotunda.

I. G. Farbenindustrie AG , founded in Frankfurt am Main in 1925/26, needed a representative office building for its central administration. The space requirement of the then fourth-largest company in the world was enormous, and so one of the largest office buildings of the time was built on part of the Grüneburg site , which was still considered ultra-modern until the 1950s.

The clients did not want a Bauhaus style , but an "iron and stone symbol of German commercial and scientific labor". Hans Poelzig designed the building in decidedly modern forms , but in a material style that was typical for him. Experts consider the building to be part of the New Objectivity , with some emphasizing Poelzig's independence. 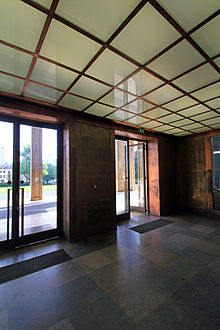 Vestibule with porter's box (on the right edge of the picture). The walls are clad with copper.

The design language of the generously swinging structure combined modernity and tradition. The cladding with stone slabs made of Cannstatt travertine reinforces the warm and at the same time monumental look. The interior construction and the design of the high-quality interior was carried out according to plans by Poelzig's partner Marlene Moeschke-Poelzig .

The 14 hectare park was built in 1929/30 according to plans by Hans Poelzig, who worked with the Frankfurt horticultural director Max Bromme, Karl Foerster and artists from the Bornimer district. The young Herta Hammerbacher and Hermann Mattern were among the Foerster employees .

The building is 250 meters long, 35 meters high and has nine storeys, with the storey height decreasing from the ground floor towards the top (from 4.6 to 4.2 meters). This makes the building look higher to the viewer. The total building volume of 280,000 m³ was built from 4600 tons of steel, the steel frame construction was filled in with bricks and the floors were built from hollow stones. The facade was clad with 33,000 m² Cannstatter travertine, the windows arranged in continuous bands interrupted only by the emphasized corners. The top floor is windowless, has, with the exception of the transverse structures, a very low room height and forms a clear building closure.

The IG-Farben building consists of a 10.9-meter-wide segment of a circle pierced by six radial transverse wings. A central corridor runs through the entire building, connecting the transverse wings. Due to the slight curve of the building, the hallway is visually deprived of its enormous length, which was originally not interrupted by doors. Due to their arrangement in the wings as in the main wing, all office spaces receive sufficient natural lighting and ventilation. The building looks impressive from the front, but this effect is softened by the convex shape. Inside, the building shows a lightness. In large complexes, this construction method offers an alternative to block development with inner courtyards. The prototype of this form is the General Motors Building (today: Cadillac Place ) in Detroit (1917 to 1921) by Albert Kahn .

The only entrance (apart from a few emergency exits) was up until the modernization before the university moved in in the central axis of the building, with a temple-like pillar portico in front of it, which dignified the entrance situation - a relatively common motif in administrative buildings of that time. The entrance area is somewhat splendidly designed: the entrance and elevator doors are made of bronze, the ceiling and walls of the vestibule are clad with bronze panels and copper friezes . The entrance hall behind with the two curved staircases has a ceiling with sheet aluminum and marble walls with a diamond pattern. Also in the central axis on the back of the building is a fully glazed round pavilion attached, which reveals a view of the casino, which is also located on this axis, about a hundred meters away. When the Americans were using it, there was a small snack bar in the rotunda and later a conference room. Today there is again a café in the room named after Dwight D. Eisenhower .

Between the main building and the casino, and therefore not visible from the street, there is a park with terraces and tiered water basins with the nymph sculpture Am Wasser, created by Fritz Klimsch . The casino stands in the axis of the main building on a hill. The canteen and lecture halls are now housed in the two-storey building with a terrace in front of it.

The other ancillary buildings located on the site (laboratory, garages, heating plant) have no spatial relation to the main building, they are scattered around the edge of the park.

Particularly well-known - and popular with students - are the paternoster elevators in the main building, which connect seven of the nine floors. Even after the restoration, the university kept it for monument protection reasons . After an accident caused by improper use, the paternoster lifts could only be used with an authorization certificate that was only available to students and employees of the university. From an extra 3 he was named paternoster driver's license . It can now be used again without a certificate of entitlement. 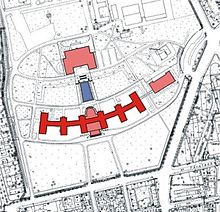 Plan of the Poelzig building

The building was built on the Grüneburg site in the “Affensteiner Feld”, an area in the northern part of what is now the Westend district , which has belonged to the Rothschild family since 1837 and which has housed the municipal insane asylum (also known as the Mad Castle ) since 1864 . The Grüneburgpark was laid out on the larger western part of the site from 1880 . The IG Farben AG , founded two years earlier, in 1927 acquired the property to build on their corporate headquarters.

In August 1928 won Hans Poelzig the five planners, including the Frankfurt Urban Planning Councilor Ernst May (together with Martin Elsaesser ) and Fritz Hoger and Jacob Koerfer , limited architectural competition .

The foundation work for the foundation took place at the end of 1928; In the summer of 1929, the construction of the structure began using the then progressive steel frame construction . The 250 meter long structure was completed in 1930. In 1931 the casino, the laboratory building and the terraced outdoor area with a water basin followed.

The IG-Farben building only served its original purpose for 15 years. During the air raids on Frankfurt during World War II, it was fortunate that it remained unscathed: On August 27, 2017, a dud from an English air mine was discovered on a construction site about 300 meters north of the building . Its defuse on September 3, 2017 required the largest evacuation in the history of the Federal Republic of Germany .

Allied troops occupied the site on March 29, 1945. The building was the headquarters of the Allied Expeditionary Forces ( SHAEF ) under General Dwight D. Eisenhower until July 1945 and was then the US headquarters ( USFET ) for Europe. The former Eisenhower office, which has been preserved and is still used for festive occasions, was the scene of important historical events. Here Dwight D. Eisenhower signed the US military government's "Proclamation No. 2" in 1945 , with which the Prussian province of Hessen-Nassau was united with the main part of the former state of Hessen on the right bank of the Rhine under the provisional name of Greater Hessen . On July 1, 1948, the eleven West German Prime Ministers, in the presence of the three Allied military governors, received the Frankfurt documents with the task of drafting the Basic Law . Shortly before, on June 20, 1948, the new (West) German currency, the Deutsche Mark , was announced here. The administration of the Bizone Economic Council was also located in the building.

On May 11, 1972, the entrance area of ​​the officers' casino was the scene of a bomb attack by the terrorist organization RAF , in which the American Lieutenant Colonel Paul A. Bloomquist was killed and thirteen other people were injured. The building, the park of which was open to the public up to this point, then became a restricted military area. This also applied to the military living and working area behind the IG Farben building. Further attacks were carried out in 1976 and 1982.

After German reunification , the US government announced a major troop withdrawal for 1995. A headquarters of the given size was no longer needed; the entire complex fell to the German state. The use was initially unclear; Proposals by the BDA and the Urban Planning Council to use the building as the seat of the future European Central Bank or the Frankfurt am Main Police Headquarters met with rejection. Finally, a proposal by the Frankfurt University President Werner Meißner, initially disqualified as a “crazy idea”, prevailed: In 1996, the State of Hesse acquired the area with the intention of relocating the humanities to a new campus of the Johann Wolfgang Goethe University . In the period from 1998 to 2001, all existing buildings in the Poelzig ensemble were converted and refurbished for the new use. The general planning of these measures was carried out by the Dissing + Weitling consortium , Copenhagen and the Ressel planning ring, Wiesbaden. In the summer semester 2001, the building was handed over to the university. After initial shortcomings, the departments of Protestant theology, Catholic theology, philosophy and history, cultural studies and modern philologies as well as the Fritz Bauer Institute have established themselves well. In 2001, the park was also rebuilt and renovated according to designs by the landscape architect Prof. Sven-Ingvar Andersson and the Klahn + Singer + Partner office.

Development into a campus

The "most modern campus in Europe" is to be built on the site north of the IG Farben building. In autumn 2008 the House of Finance, the building for law and economics, an auditorium center and a casino extension were opened in a first phase of construction. The second construction phase with social and educational sciences and administration was put into operation in 2015; The next step is the student house and the third construction phase with the institute building for art, music and non-European languages.