The Isuzu D-Max is a pickup truck from the Japanese manufacturer Isuzu that has been offered since mid-2002 and is the successor to the Isuzu Faster . In Europe it replaced the Vauxhall Motors / Opel Campo, depending on the market . In Chile it is offered as the Chevrolet D-Max and in Colombia as the Chevrolet Dmax .

The vehicle is manufactured in Thailand by Thai Rung Union Car . There the vehicle has a share of 35% in the area of ​​so-called 1-ton pickups and is the second best-selling pickup after the Toyota Hilux . 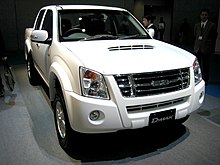 The first generation came on the market in mid-2002. Since autumn 2006 the D-Max has also been sold in Germany . The closed SUV version called Isuzu MU-7 has so far only been sold in Thailand.

In the People's Republic of China, the model was offered as a Gonow fan , but came from Japanese Isuzu production. For the Egyptian market, on the other hand, it was built by General Motors Egypt as the Chevrolet Crew Cab and Chevrolet T-series , which functioned as the successor to the discontinued Chevrolet T-series .

The D-Max was the fifth generation of Isuzu pickups since the first pickup was introduced in 1971.

In July 2012, Isuzu introduced the second D-Max generation, with the wheelbase now growing to 3095 mm and the overall length to 5295 mm. The D-Max is offered as a single, space and double cab. A 2.5-liter four-cylinder bi-turbo diesel engine with a maximum output of 120 kW (163 hp) provides the drive. The maximum torque of 400 Newton meters is between 1400 and 2000 revolutions. A 6-speed manual or 5-speed automatic transmission is available as a transmission.

In May 2017, a revised version of the D-Max came to the dealers. The 2.5-liter diesel engine has been replaced by an equally powerful 1.9-liter diesel engine that meets the Euro 6 emissions standard without urea injection . A 6-speed manual or 6-speed automatic transmission is available. In the ADAC EcoTest "The Clean Men 2017", the 1.9 liter Isuzu D-Max landed with 721 mg NOX per kilometer in last place of 108 models tested by the ADAC in 2017.

All four-wheel drive models from 2012 onwards have a trailer load of 3.5 tons and a payload of 1.2 tons.