Joseph Joachim Raff grew up in Lachen on the upper part of Lake Zurich. His father, the schoolmaster (employed from 1817) and music teacher Franz Josef Raff, had fled to Switzerland in 1810 before forced recruitment in Württemberg , where he married the ox-keeper's daughter, Katharina Schmid, in Lachen in the canton of Schwyz . In 1838 he moved to Schmerikon , then to Schwyz . The modest income as a schoolmaster did not allow him to give his son Joachim a comprehensive education. At an early age, however, the boy practiced playing the violin, piano and organ.

When the papal nuncio needed an interpreter for an official matter, Joachim entered work as his companion at the age of 18. He proved his worth and became a teacher in Rapperswil that same year . However, his thoughts were on music, and four years later he freed himself from teaching. As a result of a youth prank, he was expelled from the canton of Schwyz as an “undesirable foreigner” and moved to Zurich . When he found out that Franz Liszt would give a concert in Basel , the opportunity arose in the summer of 1845 to experience and see his great role model for himself. Since he had no travel money, he marched on foot in the pouring rain. Unfortunately, all the seats were sold out, but Liszt found out about his admirer, also let him into the concert hall and gave him a special place on the stage. Through Liszt's mediation, Raff got a job in a Cologne music shop from autumn 1845. This ended his time in Switzerland.

Beginnings as a composer

Raff was mainly self-taught , but his first compositions already showed a great talent. In an effort to make himself financially independent and to become known as quickly as possible, he fell into a real compositional fever and produced as if on an assembly line, which was not very beneficial for his artistic development. In a letter he stated that he wanted to force his composing career by force.

On Mendelssohn's and Liszt's recommendation, Breitkopf's first compositions appeared in print. Nobody wanted to sign a permanent contract with him, which would have been necessary for a future as an independent composer , which is partly due to Raff's often undiplomatic, sometimes know-it-all behavior. In his desperation over the never-to-come breakthrough and the fact that Liszt did not give him enough support in his opinion, Raff turned to his father’s home and moved to Stuttgart , but had to live a meager life there as an occasional music teacher.

In Stuttgart he met the pianist Hans von Bülow , who was to become his sponsor and long-term friend. After a job in a publishing house in Hamburg and an extensive letter of apology to Liszt, he returned to Weimar in 1849 , this time as his personal secretary and assistant. Raff primarily had to orchestrate Liszt's orchestral works, which earned him no laurels but plenty of experience. His opera King Alfred was well received by the audience. In Weimar he met Doris Genast, whom he was to marry in 1859.

He also made the acquaintance of the virtuoso violinist Joseph Joachim here, made friends with him and encouraged him to compose. Helene Raff writes: "When they signed in the foreign books, they had fun with how nice the two names were to each other." Hans von Bülow says: "Apart from Raff and his first name, I don't deal with anyone here." The three friends wrote virtuoso chamber and piano music together.

Because the great success was a long time coming, Raff moved to Doris in Wiesbaden in 1853 . With his first symphony An das Vaterland on the song Was ist des Deutschen Vaterland? whose patriotism hit the nerve of the times, in 1861 he won first prize at the music competition of the Gesellschaft der Musikfreunde in Vienna with a prominent jury ; the first performance took place on February 22nd, 1863 in the Wiener Musikverein .

The symphony Im Walde quickly spread his fame, as did the fifth symphony Leonore, which is still occasionally played today . In Wiesbaden, where Raff also spent some time with his colleague Richard Wagner , he worked until 1877. In addition to his initial activity as a teacher for piano and lecturer for harmony, this time is considered to be his most productive phase of compositional work. The increasing success of his works allowed him to work as a freelance composer from the beginning of the 1870s. 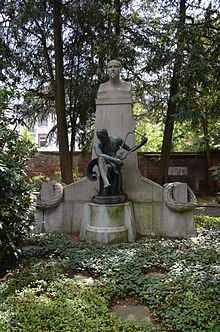 Grave in the main cemetery in Frankfurt

In 1878, he was appointed first director of the Hoch Conservatory in Frankfurt am Main , which thanks to his work quickly gained an international reputation. This fulfilled his dearest wish for a secure existence. During five years he demonstrated his great abilities as a teacher and organizer and was highly regarded as a composer and conservatory director. Companions from this time included Clara Schumann and Julius Stockhausen .

Joachim Raff died of a heart attack in his Frankfurt apartment in 1882. The burial took place in Frankfurt's main cemetery on June 27, with great sympathy from the population (grave location: Gewann D 298). The city magistrate declared the grave to be a grave of honor . Condolences arrived from all over the world. Then it gradually became quiet around him. His works, which were still at home in concert halls at the turn of the 20th century, soon fell into oblivion. On the occasion of his 150th birthday, a memorial was unveiled in 1972 in his birthplace, Lachen.

Eclectic and productive, Raff caught the eye of his contemporaries for his keen intellect. During his lifetime he was considered one of the most sought-after composers in the German cultural area and was placed on a par with Wagner and Brahms by contemporary commentators . His compositional work includes operas , sonatas , symphonies , instrumental concerts , suites as well as overtures and chamber music. The first versions of Franz Liszt's early symphonic poems, which Franz Liszt conceived on the piano and left to Raff to orchestrate according to his specifications, are also due to his orchestration.

His works were performed frequently during Raff's lifetime. In the 20th century he was largely forgotten, and his compositions were judged unfavorably. Since around 1970, and especially since the 1980s, numerous works (especially instrumental music) have been published on phonograms, so that you can judge for yourself.

With the rediscovery of Romanticism , an upgrading of his work seems to be on the way. Certainly not everything Raff wrote was of the same rank. However, his best compositions are characterized by a rich artistic disposition and expressiveness. With taste he knew how to combine forms of the then frowned upon baroque and classical with the ideas of his time.

Portrait from a younger age 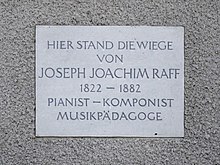 Works for choir and orchestra

Chamber music without a piano

Letters from J. Raff from 1852 to 1875 are in the holdings of the Leipzig music publisher CF Peters in the Leipzig State Archives . In the house where he was born in Lachen, the Joachim Raff Archive with autographs , first editions, etc. was opened in 2018 under the leadership of Res Marty - head of the Joachim Raff Society . a. abandoned objects opened.