Development of the Russian air force until 1914

In 1910 Russian pilots with French planes opened the first military flight school; then the training took place in Gatchina in summer and in Warsaw in winter .

In 1911 the first show of military aircraft took place in Gatchina and airmen took part in the major army maneuvers.

In 1912 the Navy procured 10-12 seaplanes of the Voisin Canard type . Five naval officers signed up for training as the first volunteers. The first sea aviation school was opened in Katscha near Sevastopol . Sea air stations in St. Petersburg , Reval , Libau and Sevastopol followed later . The imperial aircraft hangars in the port of Reval , which are still preserved today, were the first solid hangars in the world. For the first time, a radio link was established from an aircraft to a warship using radio telegraphy.

Most of the flights were carried out with foreign machines that were imported or manufactured under license in Russia . The army used German Etrich pigeons , albatrosses and Aviatiks , French models from the companies Bréguet , Blériot , Deperdussin , Hanriot , Nieuport and Farman, as well as the four-engine Russki Witjas , a giant aircraft made by Russian designer Igor Sikorski . The navy had flying boats of the Lévèque and Curtiss types , as well as double-deckers from the French manufacturers Farman, Astra , Breguet and monoplane from Nieuport.

In 1914, Russian airmen made flights to the Arctic for the first time in search of the expedition of the polar explorer Georgi Sedov, who had disappeared there .

The Russian army aviators were led by the Aviation Department of the General Staff in Saint Petersburg . The air force inspector was General Helgard.

With a strength of 244 aircraft, 145 of them for front-line use, plus 4 airships and 46 tethered balloons, the air forces of the Russian army were second to the German air force at the outbreak of war , ahead of the French , which had around 150 aircraft . There were also 12 airships and 46 balloons. Over 130 trained pilots and around 100 observers were available.

The aviation forces were distributed to 39 aviation companies (squadrons) of four aircraft and two reserve aircraft.

From the outset, the mobilized aircraft - Nieuports with 70 hp engines, Farman 16 and 22, as well as a colorful variety of types from French Morane-Saulniers and Voisins, German Albatrosses, Aviatiks and LVG , British Bristol and other types - proved to be only conditionally Front requirements grown; in particular the required rate of climb of 11 minutes at 500 meters was far too low to be able to evade the gunfire of the enemy. The first two large bombers, Sikorsky Ilja Muromets , did not meet expectations either.

The troops now demanded a service ceiling of 3,000-4,000 meters and a higher airspeed appropriate to the enemy aircraft. There was no aircraft armament, the inadequate equipment with photo material delayed the evaluation of aerial photographs, the infantry were not trained to recognize their own aircraft and also took Russian crews under fire. All the prerequisites for artillery observation and fire control from the air were lacking.

There was a lack of spare parts for the eleven different engine types, with only 30–40 new aircraft leaving the aircraft factories per month, the quality of which fell short of what was required at the front. Engineers and skilled workers had been drafted prematurely and sent to the front. The replenishment control failed; Aircraft were delivered to the flying units without engines, so that two or three aircraft had to "share" one engine. So asked the leader of the IX. Army assigned flier squadron so that he would only be assigned two missions per day, since only two aircraft are still operational. At the end of 1914, a large part of the aircraft had been used up, units had to be pulled from the front, even the purchase of some Morane-Saulnier Parasol and the use of captured aircraft could not fill the gaps.

The air force, which was assigned to the engineer force until 1915, was subordinated to the high command, the Stawka , as a separate branch .

In mid-1915, after the purchase of French aircraft, around 350 aircraft were in service at the front. 233 pilots passed through the flight schools in 1915, but by December 1915 the losses of the pilots also amounted to 30%. In autumn 1916, the 75 aviation departments at the front had around 716 aircraft, and a further 487 pilots had graduated from the flight schools. In February 1917, over 1,000 aircraft are said to have been in use.

The efficiency of the air force developed from 1914 to 1916 as follows:

Debris from the destroyed albatross

On August 26, 1914, the war saw the first "aerial victory": The Russian pilot, Staff Captain Pyotr Nesterov , rammed an Austrian Albatros with his unarmed Nieuport IV monoplane; the clash cost his opponents and himself his life. Staff captain Alexander Kazakow , who the XIX. Army Corps subordinate squadron, even took a long steel cable in his machine with which he wanted to tear down the wings of enemy aircraft. He also rammed an enemy plane and caused it to crash.

Since 1915 Warsaw and the army headquarters have been protected by defense squadrons. Lewis machine guns were gradually issued to the air units. Nevertheless, the head of the Russian Field Aviation Administration reported on January 31, 1916 that the technical inferiority of the aircraft and the lack of fighter pilots made it impossible to carry out aerial reconnaissance. A French support mission with a fighter squadron, an aerial photography department and a radio squad, which was posted in the spring of 1916, was supposed to improve the situation; in addition, the first three Russian fighter squadrons were formed in March and sent to the front in May; should have a hunting squadron. The most successful fought was the “Death or Honor” squadron stationed near Lutzk under the command of Staff Captain Alexander Kazakow. In mid-1917, 11 combat squadrons were in action.

However, the air superiority of the Central Powers could not be broken. By October 1917, Russian aviators had achieved a total of 182 confirmed aerial victories with their own losses of 250 fallen pilots and 70 observers as well as 54 airmen who had been taken prisoner.

See list of Russian fighter pilots in World War I.

MW Schidlowski, the managing director of the Russian-Baltic wagon factory that produced the four-engined bomber Sikorsky Ilja Muromets , was able, despite the disappointing performance of the two large aircraft delivered at the beginning of the war, through personal intervention in the War Ministry to ensure that their production was not abandoned, but rather the basic stock should form a strategic bomber squadron. On December 10, 1914, under the leadership of Schidlowsky, who was appointed major general, the "Eskadra Vosduschnych Korablei" (Эскадра воздушных кораблей) was formed.

This “squadron of flying ships” started its operations in February 1915 from Jablonna , about 40 kilometers behind the lines in Poland. In the course of the war, the squadron made 442 missions on the front lines with Germany and Lithuania and more than 40 aerial victories, with only 2 aircraft lost in service during the entire war. A total of 73 of these giant bombers were produced, around half of which were used in the war. 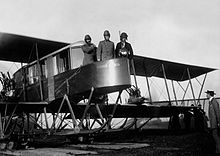 The naval aviators in the Baltic and Black Sea remained subordinate to the Russian naval reconnaissance forces; they were only combined in an independent squadron in 1916.

In the Black Sea , the Russian Navy had the two cargo ships "Imperator Nikolai I" and "Imperator Alexander I" and the former yacht " Almas " converted into aircraft mother ships since 1915 . These ships could take 6-8 seaplanes, the "Almas" a maximum of 3. Other warships were also able to use individual aircraft, such as the cruiser "Kagul", of which a Curtiss seaplane was used against the Dardanelles in 1915 . A few Romanian ships were added later. Out of sight, about 30 to 40 miles from the target, the planes were set down by the mother ships for takeoff; The communication between aircraft and ship took place via smoke signals due to the lack of radio equipment.

After the reclassification in 1916, two sea aviation brigades, each with three "Divisij" ( divisions ), each with three "Otrjadi" (departments), each with a strength of eight pilots and eight aircraft, as well as eight reserve aircraft , operated in the Black Sea . In addition to the reconnaissance and combat of enemy ships, the support of the Romanian armed forces and the fight against enemy naval facilities were the main operational objectives.

The plan already envisaged a monthly production volume of 140 Nieuport monoplanes and 8 Farman biplanes for 1915, which were to be supplied by Russian industry. In 1916, 1,769 aircraft and 660 engines are said to have been produced, but reliable figures are missing.

Resupply deliveries from the Entente Powers were threatened by German submarines - the torpedoed "King David" alone sank with 46 aircraft on the way to Arkhangelsk . Even so, the allies supplied about 900 aircraft and 1,300 engines to Russia.

Due to the logistical difficulties and the great dependence on aircraft and engine supplies from the allies, the Russian army was unable to build up a powerful air force in the course of the war, despite all efforts . Russian aircraft production from 1914 to 1917 delivered significantly less than that of comparable warring nations.

Besides the Ilya Muromets , the Russian aviation industry developed only a few other successful types, such as various double-deckers by the designer Dmitri Fyodorow of the Anatra works in Odessa and the developments by aviation pioneer Vladimir Lebedew . The types Moska MB , Anatra D and DS , the Lebedew LM-1 , Lebedj-11 and Lebedj-12 became particularly well known . Often, however, the Russian products were technically immature or of unreliable quality; frequent flight accidents were the result.

In the Black Sea and the Baltic Sea, the naval aviators operated with flying boats from the designer Dmitri Grigorowitsch, such as the Grigorowitsch M-2 , M-3 , M-4 and M-5 . Some test models such as the Saveliev four-decker and the Porokhovshchikov 2 did not go into production, even the large bomber "Alexander Newski" built by Igor Sikorski at the end of 1916 was no longer in series production, and the oversized giant bomber Svyatogor by the designer Slessarjew remained unable to fly.

Mostly French aircraft were used, including

as well as some British types, including

and finally some prey planes like the Albatros CI, LVG B.II and LVG CI

The aircraft were mainly produced under license in Russian factories, for example at the Dux company in Moscow , which built prototypes from Voisin, Nieuport, Farman and Morane-Saulnier, or variants or copies such as the Anatra built by Anatra were made Voisin Ivanov or the German aviation replica Anatra D . Gnome-et-Rhone -Umlaufmotoren and line engines from Hispano-Suiza were also built under license.

The national emblem for Russian aircraft was a red, blue and white cockade, which was applied to the wings, the sides of the fuselage and the tail unit. In some cases, the Russian national colors were also painted on the fuselage in the form of a square flag or triangular pennant.

Some pilots and squadrons used particularly distinctive symbols to identify their aircraft in the air. So had z. B. Captain Kruten had the head of a knight painted on his machine, Captain Kazakov's Eskadra 19 marked their fighters with a white skull on a black background.

The Russian naval aviators marked their aircraft with the blue St. Andrew's cross on a white background.