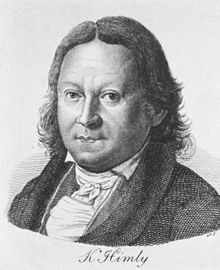 Karl Gustav Himly was born as the son of the secret cabinet secretary Himly at the Brunswick court and was the younger brother of the pedagogue Johann Friedrich Wilhelm Himly (1769-1831).

Himly began studying at the University of Würzburg with Karl Kaspar von Siebold in 1790 after his school days and attending the anatomical-surgical college in Braunschweig . From 1792 Himly studied at the Georg-August-Universität Göttingen with August Gottlieb Richter and in 1794 became his assistant. On September 6, 1794 he received his doctorate from Himly with his thesis Dissertatio inauguralis medico-practica observationes quasdam circa epidemiam huius anni dysentericam sistens [...] (1794) . In 1795 he was appointed professor at the medical and surgical clinic in Braunschweig. From 1797 he was a corresponding and from 1804 a full member of the Göttingen Academy of Sciences . In 1801, Himly, who was also a supporter of natural philosophy , took over the professorship for medicine at the University of Jena as the successor to Christoph Wilhelm Hufeland (and probably against Goethe's will) . Since 1803 las Himly at Göttingen then Theoretical and Practical Surgery and taught - for the first time in Germany - in the subject Ophthalmology ( ophthalmology ). Himly specified several ophthalmic instruments and introduced the mydriatics ( agents that dilate the pupil ) into ophthalmology . His students included Karl Friedrich von Heusinger , Maximilian Joseph von Chelius , Dietrich Georg von Kieser , Wilhelm Baum , Peter Krukenberg , Georg Hartog Gerson and Ernst Alban .

Karl Himly began publishing the first German ophthalmic journal under the title Ophthalmological Library in 1802 together with his Viennese colleague Johann Adam Schmidt (1759–1809). Three volumes could be produced by 1805, after which publication was interrupted until 1816. His resumption of work as a publisher ended in 1819. His international reputation as a specialist led to Niccolò Paganini visiting him on the sidelines of a concert in Göttingen on May 25, 1830 because of eye problems.

In 1805, Himly was appointed director of the Academic Hospital in Göttingen, where he combined the outpatient department with the clinic of his teacher Richter. During this time there was a collaboration with Konrad Johann Martin Langenbeck , which ended around 1808. A new clinic was opened in 1809, which Himly ran until 1814. There he befriended the pioneer of dentistry Joseph Calmann Linderer in 1812/13 .

Himly served in the hospitals of the Prussian army on the Rhine.

Himly died from a fall on a leash , suspected suicide . The exact circumstances remained unclear.

His son Ernst August Wilhelm Himly (1800–1881), who published his father's textbook posthumously in 1843, was professor of physiology, comparative anatomy and forensic medicine in Göttingen. His son August Friedrich Karl Himly (1811–1885) was a chemist and professor at Kiel University .

He (co) edited the following journals: