Kastelorizo ( Greek Καστελόριζο ( n. Sg. ), Also Kastellorizo Καστελλόριζο, Italian Castelrosso 'red fortress', as well as Megisti Μεγίστη '[the] largest' and of which Turkish Meis ) is a Greek island in the eastern Mediterranean , around three kilometers off the Turkish coast. It is located about 125 km east of Rhodes and has an area of ​​9.113 km². With a few surrounding islands and rocks, it forms the second smallest municipality in the South Aegean region with an area of ​​around 12 km² and the easternmost municipality in Greece. It rises with the summit of Vigla to a height of 273 m above sea level. d. M.

After the connection of the Dodecanese and thus Kastelorizos to modern Greece, the ancient name of the island, Megisti ( Greek  Μεγίστη , after a mythical first settler named Megisteas) was introduced as the official name. It is believed that the seabed in this region is particularly rich in raw materials, which is why both Turkey and Greece claim the surrounding waters as an exclusive economic zone.

The island called Megiste ( ancient Greek Μεγίστη Megíste ) is in front of Antiphellos and belonged to the ancient landscape of Lycia . From the 4th century BC It was a naval base of the Rhodians . According to Strabo it was a city ( polis ) , the older Pliny speaks of a former community ( civitas ) .

The ruins of the inland old town of Paleokastro (dt. Old Castle ) testify to the ancient settlement. Along with the rest of Greece, Kastelorizo ​​belonged successively to the Empire of Alexander the Great , the Roman Empire and the Byzantine Empire . In 1306 the island was conquered by knights of the Order of St. John from Rhodes, who turned the island into a mighty fortress. According to one of several theories of etymology, the castle is said to have given the island its younger name, because the stone of its walls was reddish in color.

In their failed attempt to drive the Hospitallers out of Rhodes, soldiers of the Mamluk sultan az-Zahir Saif ad-Din Jaqmaq of Egypt attacked the Hospitaller fortress on Kastelorizo ​​in 1440 and damaged the defenses. In the course of the fighting, the Mamluks lost two thirds of their ships deployed there and all troops landed on Kastelorizo. In 1450 King Alfonso V of Aragon, Sicily and Naples had Pope Nicholas V overwrite the island. In 1451/1452 he had the fortress repaired. In 1552 Kastelorizo ​​fell to the Ottoman Empire . As a result, the Greek inhabitants enjoyed religious, cultural and economic privileges, and so the island's merchant fleet became the largest in the Dodecanese. 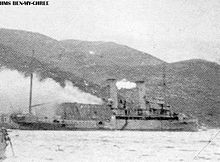 During the First World War , the island was occupied by French troops on December 28, 1915. Until the end of the war, the island was often shelled from the Turkish mainland. On January 11, 1917, the British aircraft mother ship Ben-my-Chree was sunk; In 1921 it was salvaged and scrapped.

In 1922 the island came under Italian administration. The Italians, who had ruled the other islands of the archipelago since 1912, appeared as colonial rulers on Kastelorizo ​​and were accordingly unpopular among the population. During this time, a large part of the island's inhabitants emigrated, especially to Australia. Under the Italian occupation, the Kastelorizos bay was used by Alitalia and Air France seaplanes as a stopover on flights to Africa and the Middle East in the 1930s.

During the Second World War , the British tried unsuccessfully to conquer the island in early 1941 using Operation Abstention . It was not until September 1943, after the capitulation of Italy , that they were able to occupy Kastelorizo. The Italian settlers were evacuated or forced to leave the island and scattered over Cyprus, Egypt and Palestine. In the summer of 1944, the British had to vacate the island again after a German attack. As they withdrew, an ammunition dump caught fire; the explosion destroyed more than half of the houses.

In 1947 Kastelorizo ​​became part of Greece along with the rest of the Dodecanese. Around 300 of the original residents wanted to return to the island in October of that year. However, 35 people were killed in a fire on their ship. When the survivors reached the island two months later, they found their homes destroyed and looted. That is why many finally decided to emigrate. Around 10,000 descendants of the islanders live in Australia today and are known there as "Kassies".

In 1920 Kastelorizo ​​still had around 20,000 inhabitants, today there are around 400. They are supported with considerable subsidies from the Greek state in order to counter Turkish claims to territory. In 1991 the film Mediterraneo was shot on the island , which was awarded an Oscar.

The main town on the island was largely a ghost town two decades ago . Since then, many old crumbling buildings have been brought back to life on the island, as the government invested a lot to promote this easternmost outpost of Greece. Again, there are many Italians among the foreigners who have moved in. Recently, a (so far still modest) tourism has started on the island. The town center at the port has been extensively restored in part - also with the help of state funds - the ruins around it are overgrown and hardly noticeable. One of the sights is the Blue Grotto on the southeast coast of the island.

In the last years of the 20th century in particular, the Greek state invested a disproportionate amount of money in the island for political reasons (sovereign conflict with Turkey), so that, for example, the care of the few students and the medical care were better than on many larger Greek islands . The ferry and flight connections were or are subsidized in order to ensure traffic to the island and its supply, in order to make the island attractive despite its remote location.

On April 26, 2010, the then incumbent Prime Minister Papandreou chose to stay in Kastelorizo ​​to reveal the threatened insolvency of the Greek state.

Location of the islands off the Turkish coast

There is an irregular ferry connection to Rhodes , which runs two to three times a week. The crossing takes about five hours.

Since June 2007 the official entry and exit from Kastelorizo ​​to Turkey ( Kaş ) and vice versa is possible. Since then, the Meis Express has been running from Kaş in Turkey to Kastelorizo ​​in the morning and back in the afternoon. It is used for multi-day trips to Turkey, on the other hand, many day visitors came from Kaş to extend their Turkish tourist visa for 90 days. However, this has not been possible since the beginning of 2012, as Turkey's residence regulations have been changed in this regard. Most of the Turks as well as the Greeks have come to terms with the political situation and are building on peaceful coexistence, not least because it can benefit the tourist development of both areas.

The place is also very popular with sailors, who enjoy an evening with Greek flair and food for a change during a Turkey trip.

Kastelorizo Airport ( IATA : KZS , ICAO : LGKJ ) is located about 2.5 kilometers southwest of the city of Megisti and was opened in 1986. The asphalt runway with an orientation of 13/31 and a length of 798 meters enables smaller turboprop aircraft to land . The airfield is at an altitude of 149 m (489 ft) above sea level . Since 2006 there has been a daily flight connection to Rhodes. However, spontaneous failures in strong winds are possible.

After 1920 the French occupiers issued postage stamps for the French official post in Turkey, which were first overprinted with the words “ONF / Castellorizo”, then with “BNF / CASTELLORIZO” and finally with “OF / CASTELLORISO”. Today they are coveted collector's items. Italian postage stamps with "CASTELROSSO" printed since 1922 are more common and cheaper.

The album On to Iceland by David Gilmour is inspired by this island. Among other things, he spent a night there, which ultimately led to the song On An Island . Gilmour owned a villa on the neighboring island of Rhodes until 2014 .