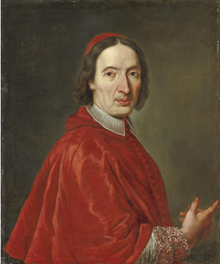 Family coat of arms of the House of Pico della Mirandola

Lodovico was born in Mirandola in the Diocese of Reggio Emilia . He came from the family of the Dukes of Mirandola and was the eighth of nine children of Duke Alessandro II Pico della Mirandola, Marquis of Concordia and General of the French Army, and Anna Beatrice d'Este, Princess of Mondena and Reggio. His siblings were Maria Isabella, Laura, Francesco Maria, Galeotto, Virginia, Fulvia, Giovanni and Alessandro. He was related to Cardinal Anton Maria Salviati .

He received his doctorate in utroque iure .

After the French attack on his hometown, he fled to Vienna via Bologna and Rome . There he was received by the emperor. On May 21, 1699, on his return to Rome, he was appointed Prelate of His Holiness and Cleric of the Apostolic Chamber. On June 7, 1706 Pope Clement XI appointed him . as Prefect of the Apostolic House and shortly thereafter he was ordained a subdeacon .

On June 25, 1706 he was appointed Patriarch of Constantinople , on June 28, 1706, Papal Assistant to the Throne and on July 11, 1706 by Fabrizio Paolucci , Cardinal Priest of Santi Giovanni e Paolo , with the assistance of Giuseppe Vallemani , Titular Archbishop of Athenae and Ulisse Giuseppe Gozzadini , titular archbishop of Teodosia , ordained bishop. On October 24, 1707 he was made Prefect of the Apostolic Palace. From 1707 he was governor of Castel Gandolfo for three years .

His plaque in Santa Prassede

In the consistory on May 18, 1712 Pope Clement XI. elevated to cardinal in pectore . On September 26, 1712 his name was published and on November 21, 1712 he was assigned the titular church of San Silvestro in Capite . On January 4, 1717 he was appointed treasurer of the Holy College of Cardinals and on November 22, 1717 Bishop of Senigallia with the title of Archbishop. On September 10, 1724, he gave up his office as bishop. He was prefect of the Congregation for Indulgences and Holy Relics and took part in the conclave in 1721 , which Innocent XIII. chose, part and in the conclave 1724 , which Benedict XIII. chose. On April 24, 1728 he moved to the titular church of Santa Prassede . In July 1730 he was appointed Archpriest of Santa Maria Maggiore and it was about a year. He also took part in the conclave of 1730 , which Clemens XII. elected to the Pope. On April 9, 1731 he was appointed Cardinal Bishop of Albano and took part in the Pope election in 1740 by Benedict XIV . On August 29, 1740 he became Cardinal Bishop of Porto e Santa Rufina and Subdean of the Holy College . He died on August 10, 1743 in his palace near Santi XII Apostoli in Rome. The next day he was laid out in this church and buried there on August 12, 1743. His body was later buried near the church of Santissimo Nome di Maria al Foro Traiano , of which he was the benefactor, near the Trajan Column . His heart was buried in Santa Prassede .