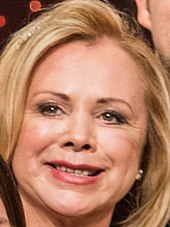 Marijke Amado (* 1. February 1954 in Tilburg , Netherlands as Maria Henrica Elisabeth Verbraak ) is a Dutch presenter , also from the German television and radio is known.

After an apprenticeship in goldsmithing , she worked as a tour guide and animator . She was discovered by Rudi Carrell on a cruise and hired in 1978 as an assistant for his program Amlauf Band . Her breakthrough came with the ARD pre-evening program WWF-Club , which was broadcast from 1980 to 1990 in the broadcasting area of ​​the WDR . At the beginning of her career she was also active as a singer (e.g. I will never dance tango again , Höpseke , Lass Uns Irgendwo Hingehn ); she also recorded a Schlager medley together with her WWF club colleague Jürgen Triebel .

In 1989, Amado presented the WDR program Easy , in which young talents and their hobbies were presented, and in 1990 played in the six-part ARD children's series Company Jocotobi . In 1991 she was a guest star in an episode of the RTL series Ein Schloß am Wörthersee and from January 1992 to April 1992 she hosted the RTL quiz show Superfan , in which three fans of an attending music guest had to answer questions about him.

From 1990 to 1998 Amado presented the RTL children's program Mini Playback Show . Because she “dressed up children as sex objects” in the process, she received the 1996 award of the offended viewers . Due to poor audience ratings, the show was revised in 1998 and the presenter changed: she had to give way to Jasmin Wagner . From 1999 to 2001 Amado presented the program Amado and Antwerpes - The Talk Show for Connoisseurs together with Franz-Josef Antwerpes on WDR television .

Amado temporarily ran the company Step to the future , which trained young TV presenters, and had a few appearances in musicals , including in Beauty and the Beast .

After Amado fell victim to an impostor with whom she entered into her third marriage, she had to leave her home and start a new life. She described these difficult years and situations in 2007 in an autobiographical book entitled Mr. Bink - From Dream Man to Nightmare .

Again and again she moderates programs, for example on the Benelux countries or music programs, and was a guest on programs such as Alfredissimo , Zimmer frei! , Blond am Friday , Planet Wissen , Kachelmann's late edition , The perfect celebrity dinner , Volle Kanne , Lafer! Lights! Yummy! , Saturday evening , Weck Up , the NRW duel . She has already appeared twice in the program The Perfect Celebrity Dinner , in the New Year's Eve Special in 2007 and in 2011.

From the beginning of 2008 to the end of 2009, she hosted the program Schlagerboulevard on the radio on WDR 4 every 14 days on Sunday afternoons with her former WWF Club colleague Jürgen Triebel . In August 2009, a pilot episode of the talk show Amado - der Talk was broadcast on MDR , which was supposed to be broadcast on Friday evenings but was not continued. At the beginning of 2011, four episodes of the program Aufgemöbelt - first class living second hand were broadcast on SWR television , in which she and Oliver Schübbe and Daniel Becker beautified apartments with self-made furniture.

In 2012 she was able to take first place in the Vox show Promi Shopping Queen . In April 2013 Amado was seen in the RTL dance show Let's Dance ; her dance partner was Stefano Terrazzino . They danced their way to eighth place. In May 2013, Amado was seen in the RTL-II -Doku-Soap Celebrity Wife Swap . From September 13, 2013 to September 27, 2013 she was a candidate for Celebrity Big Brother on Sat.1 . She took 3rd place there. In 2014 Amado was in the NDR quiz show Wer hats Seen? With Harry Wijnvoord and Maxi Arland . to guest. In November 2017 she was - again with Harry Wijnvoord - a guest on the quiz show Who knows something? , in which she competed against Jürgen von der Lippe in June 2016 . In October 2017, Amado took part in Die Küchenschlacht as part of the first celebrity week and took third place.

In April 2015 she started her own online flower delivery.

On February 24, 2016, she celebrated with her first solo program, Echt Echt !? Premiere in Neuss . The original texts are from the Dutch cabaret artist Brigitte Kaandorp . Directed by Anka Zink . Subsequently, the program was changed and got the title Amados roller coaster .

Amado has also been dealing with environmental and energy problems for a long time and is President of her foundation wfwf (water for the world foundation) , which aims to provide clean drinking water for the developing world .

Amado was married three times. She kept her name Amado from her first marriage and from her second marriage she has a son with whom she lives in Lanaken , Belgium , near the Dutch border with Maastricht .

Participant in a show