from Wikipedia, the free encyclopedia
This is the spotted version , flagged on June 4th, 2020 . There is 1 pending change that has yet to be viewed. 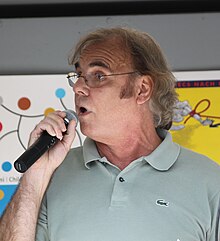 Jürgen Triebel (born July 28, 1948 in Bad Wildungen ) is a German composer, musician, producer, TV and radio presenter, speaker and singer, who is known for radio and television.

He was born the son of an actress and a conductor. After primary school in Oberhausen, he attended grammar school in Duisburg and graduated from high school in Wiesbaden. He then studied music at the conservatory in Duisburg and passed his exam as a choir director. Even during elementary school he played many children's roles at the Stadttheater Oberhausen. During his studies he was a member of various beat bands as a singer and keyboard player. With the band The Newcomers he brought the BEAT to the theater stage for the first time and musically accompanied the first plays by the author Peter Handke. With the band Countdown he got his first recording contract with Polydor in 1969 . The first television appearances followed on ZDF Disco and on WDR We in the spotlight etc.

After the band broke up, he worked in various studios in the Ruhr area as an author and arranger and also tried his hand at being a conferencier. In order to increase his livelihood, he worked alongside as a postman, steel worker and salesman. In 1976 he took part as a composer with the song Ein neue Tag in the German Grand Prix preliminary round, which only came in last. As a result, he composed jingles for WDR 2 and the signature tune for the ARD broadcast Plattenküche u. v. a.

In the late 1970s he founded together with lyricist Horst Krause and the merchant Bernd Kowalzik in Bochum the publisher and the label Roof - Music For this Triebel on the side of the brilliant sound engineer produced Helmut Rohlfing the first three European albums the American composer Louis Hardin , called MOONDOG , "Moondog in Europe" / "H´art Songs" / and "New Music for an old Instrument". Albums that only achieved cult status worldwide after the artist's death.

In the early 1980s he was a producer for new artists in the Cologne branch of EMI and as a singer in the Neue Deutsche Welle with the group NUX . In 1981 he also appeared in the WWF Club with the title Cool Cousin Cocaine . He also sang the title Unter dem Wartburg as “Lothar” in many television programs for the instant product project Lothar and the Trabants .

In 1982 and 1983 he was named "Best Foreign Song Composer" at the Castlebar International Song Contest Ireland .

“Just for fun” he took part in a WDR casting , which was looking for a weather presenter. So he became the weatherman of the new program Current Hour and was also allowed to create his own music reports and short features. Among other things, he shot a portrait of the composer Moondog and the painter Ernst Fuchs as an author and director .

From 1985 to 1990 he then moderated, as the successor to Jürgen von der Lippe, together with Marijke Amado and Frank Laufenberg, the ARD pre-evening program WWF-Club , which could be received in the broadcasting area of ​​the WDR . From 1986 to 1987 he also appeared in the ARD comedy series Sender Frikadelle together with Margarethe Schreinemakers . After the WWF Club in summer 1990, he was then in 1991 fixed a jury member in the RTL telecast mini playback show , for which he also wrote the theme song and the final song, in which he again worked with his colleague Marijke Amado together .

This was followed by two shows of his own at the DFF , the main broadcaster of the MDR , from 1990 to 1991 . One with the title SCHLAGSEITE , four shows with well-known pop stars from West and East, and HINTER DEM HORIZONT , a travel quiz from a cruise ship around Western Europe.

From 1993 to 1999 he devoted himself more to producing, composing and writing for various interpreters and dealt more and more with young artists. Over the years he wrote many titles and was able to land greater successes.

Between 2007 and 2010 Triebel hosted the radio program Schlagerboulevard on WDR 4 together with his former WWF Club colleague Marijke Amado .

From 2010 to 2016 he was also musical director of the WDR cult program Schöne Bescherung .

From 2016 until today he has been working on the creation of treatments for television programs and various music productions in collaboration with Walther Kahl, the head of music production and the SEYCHELLES MUSIC publishing house in Bergisch Gladbach / Cologne.