The title of this article is ambiguous. Further meanings are listed under Paul Kuhn (disambiguation) . 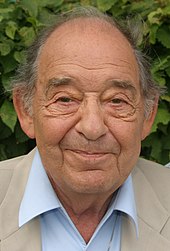 Paul Kuhn was born in Wiesbaden as the son of a croupier . At the age of eight he appeared as an accordion player at the radio exhibition in Berlin in 1936 . The boy who almost disappeared behind his instrument was nicknamed Paulchen. Later he played "Eimer" for the guests in the Wiesbaden wine bar. During his time as a Hitler Youth he discovered jazz music . In 1944 he worked as a troop supervisor for the Wehrmacht in Paris.

After his training with Kurt Thomas at the Musisches Gymnasium Frankfurt am Main , Kuhn attended the Conservatory in Wiesbaden from the age of 17 . At the same time he was already working publicly as a pianist, also in the field of jazz music. In 1945 Germany was divided into zones of occupation ; today's Hesse belonged to the US zone of occupation . Kuhn appeared before American GIs and was employed by the AFN soldier broadcaster . He was on the air almost every day and played live from the studio with his band. He appropriated the repertoire of Glenn Miller (1904–1944) and based himself on his sound.

Kuhn played in the Berlin Femina Bar with Freddie Brocksieper and also appeared in early West German jazz clubs . In the 1950s, Kuhn arranged and composed light music. From the mid-1950s, he increasingly appeared with sung hits . His greatest success was the hit song Der Mann am Klavier, composed by Horst-Heinz Henning in 1954 . Three years later, Kuhn took part in the German preliminary decision for the Eurovision Song Contest with the song Das Klavier über mir , but only achieved third place. In 1963 he sang with jazz singer Greetje Kauffeld. Every day I love you a little more ; it became a hit, followed by Kuhn's solo performance, There Is No Beer in Hawaii (1963).

With the advent of music programs on public television , Paul Kuhn became a permanent musical guest on German screens. His most important activity as arranger and band leader was the management of the big band of the Sender Freies Berlin ( SFB Big Band ) from 1968. During this time he was guest director of the SFB dance orchestra in numerous television programs, including the big international show Series Gala-Abend der Schallplatte in 1969 (Conference: Vivi Bach and Dietmar Schönherr ), 1971 (Conference: Eva Renzi and Paul Hubschmid ) and 1973 (Conference: Rudi Carrell ); The dance music programs on the screen and the Paul's Party series were legendary . 1980 was a difficult year for Kuhn: The SFB big band was dissolved, the record publisher EMI - Electrola fired him; His television program Gong Show was also discontinued after four episodes, and the second marriage failed. For a new beginning, Kuhn moved to Cologne, founded his own orchestra and then made his debut at the Press Ball in Cologne in October 1981 . With his orchestra he accompanied Peter Alexander on the 1983 tour and later on his last tour from 1990 to 1991.

From the mid-1990s he was active again in jazz. The Paul Kuhn Trio consisted of him on grand piano , Willy Ketzer on drums and Martin Gjakonovski and Gary Todd on bass . They were strengthened by Benny Bailey on the trumpet , Gustl Mayer on the saxophone and the Dutch singer Greetje Kauffeld. Since the summer of 2000 he was touring with Max Greger , Hugo Strasser and the SWR Big Band as swing legends . In 2008 Paul Kuhn recorded the CD Mensch Berlin together with Mario Barth .

At the end of 2011 Kuhn flew to Los Angeles and recorded the album The LA Session in the Capitol Studios , accompanied by John Clayton and Jeff Hamilton . The album, released in 2013, received excellent reviews: "Gifted improvisation - and the merging of three greats in their field" wrote the Frankfurter Allgemeine Zeitung , for example .

Kuhn had had an apartment in Switzerland since the 1970s. In 1980 he moved to Lenzerheide in the Swiss canton of Graubünden . He lived there with his third wife Ute Hellermann, whom he married in 1988, until his death. In November 1994 the couple was sentenced to one year probation for tax evasion of almost DM 1 million.

In 2005, Kuhn had to undergo heart surgery, and in 2007 he contracted shingles . In the years that followed, his hearing and eyesight deteriorated.

Paul Kuhn died on September 23, 2013 during a spa stay in Bad Wildungen, Hesse . He left behind his wife Ute and his son Daniel from his first marriage.

Kuhn studied the accordion , piano and clarinet one after the other . He made his first television appearance at the age of eight at the 1936 radio exhibition in Berlin . His career as a jazz pianist began shortly after the end of the war in the clubs of the US Army and gave him a permanent position at the broadcaster AFN for several years .

Paul Kuhn - The man at the piano

As a pianist, Kuhn Art Tatum and George Shearing as well as - especially in terms of style, with often sparing individual notes and chord setting - Hank Jones were among his models. Excursions into bebop are documented by pieces such as Stitt's tune (2002) and Ornithology (1999).

As an arranger and band leader, Kuhn orientated himself primarily towards Count Basie . “Basie is the basis,” said Kuhn. And: “I play the piano, but my real instrument is my band.” He wrote his first arrangement with friends about With me you are beautiful when you were 15 years old. He accompanied many top stars of German-speaking entertainment on their concert tours, including Peter Alexander , on whose tour in 1979 Paul Kuhn's wife, Ute Hellermann , was the choirmaster of their Ute Mann Singers . The orchestra was directed by Dieter Reith .

As a producer, Kuhn promoted up-and-coming talent from the end of the 1950s - including Ralf Bendix , Rocco Granata , Howard Carpendale  - and produced their recordings.

As an entertainer and actor, Kuhn has appeared in a number of television programs, including with Willy Maertens , Walter Richter and Hanns Lothar in Biedermann und die Brandstifter (1958), in the mistaken comedy Drillinge am Bord (1959), Spiel mit Vieren, Hallo Paulchen, Paul's Party . In a television series of skits entitled Der Forstarzt (1992) with Harald Juhnke , Kuhn appeared in the role of a director.

In 1985 he played himself in the television film The Man at the Piano , together with international singing stars such as Gilbert Bécaud , Marlène Charell and Bibi Johns . In 2010, Kuhn played alongside Peter Lohmeyer and Mina Tander in the tragic comedy Schenk mir dein Herz by Nicole Weegmann, the tailor-made role of an old jazz pianist. Kuhn also composed a few songs for this film. It started in cinemas nationwide on May 5, 2011, was the opening film of the Festival of German Films on June 16, 2011 and was later broadcast several times on German television. In 2012, author Christoph Simon gathered friends and companions of Paul Kuhn in front of the camera for his documentary Paul Kuhn - The Man at the Piano , such as Götz Alsmann , Till Brönner , Helge Schneider and his long-time drummer Willy Ketzer .

His numerous awards include: