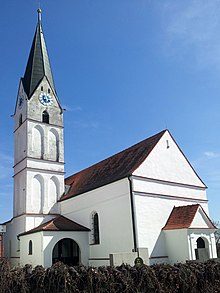 Exterior view of the St. Stephan branch church from the southeast

The Roman Catholic branch church of St. Stephan in Oberhornbach , a district of the market town of Pfeffenhausen in the Lower Bavarian district of Landshut , is a late Gothic complex from the mid-15th century; the nave was redesigned in Baroque style towards the end of the 17th century . The furnishings come from the same period and are uniformly baroque. The church is registered as a monument with the number D-2-74-172-50 at the Bavarian State Office for Monument Preservation .

Originally St. Stephan belonged to Niederhornbach, but was then incorporated into the Pfaffendorf parish for centuries . It was not until July 17, 1692 that it became a branch church of the parish of St. Laurentius in Niederhornbach . The last interior renovation took place in 1988/89, the last exterior renovation in 1995.

The east-facing hall church has a nave with baroque rounded window openings and a closed during three sides, uncollected choir and the north ajar because choir flank tower still in its late Gothic original condition. The three east windows in the choir were added in the baroque period. The 29.20 meter high tower with floor structure is decorated on the outside with pointed arches and is crowned by a pointed helmet over four triangular gables. A vestibule built on the west facade leads to the interior of the church; a pointed arch portal on the south side was walled up.

The interior of the choir is spanned by a late Gothic reticulated vault with pear-shaped ribs. These rest on profiled semicircular consoles with pointed shields in front of them. The four circular keystones of the choir vault show exposed representations from the 15th century: Jesus Christ , Mary with the child , parish patron Laurentius and the church patron Stephanus . The nave has a flat ceiling over a baroque hollow . Simple stucco decoration frames a ceiling painting by the Moosburg painter Josef Mader from 1949.

The pulpit is decorated with winding corner pillars and pictures of the four evangelists . Like the altars, the pulpit was given its original frame in the last interior renovation in the colors black, gold and red.

The oldest piece of equipment in the church is a late Gothic figure of the church patron Stephanus, which was created around 1520 by the Landshut sculptor Jörg Rot. On the chancel arch one's Madonna of the Rosary dating from around 1760 attached. The painting of St. Isidore in a rococo frame also dates from this period. The sacrificial box, decorated with notch carvings, dates from 1696. There are also two remarkable crucifixes in the branch church : one is attached to the south wall of the nave, which was made by the same master as the high altar figures. The body of the crucifix in the sacristy is a so-called "battered Christ". It is the former Niederhornbach school cross.

The organ of the St. Stephan branch church was built around 1840 by Josef Mühlbauer junior from Train . The single-manual slider chest instrument with attached pedal comprises three registers and has a short octave . The playing and stop actions are mechanical. The disposition is as follows: