This article deals with the history and content of children's theater as a theater genre; for other meanings of the term, see Theater for Children (disambiguation) .

Beginning in Germany in the 17th century

Theater performances with special children's topics go back to Christian Gryphius in the 17th century . Probably the first actual children's theater was created in Dresden in 1864 at the instigation of Agnes Nesmüller, the wife of theater director Josef Ferdinand Nesmüller . Later, the fairytale play developed , which, as a Christmas fairy tale , filled the coffers of German (city) theaters at the turn of the year.

During the revolutionary years in Russia / Soviet Union , Natalia Saz founded a children's theater - later also a music theater for children - in Moscow , which dealt with the realities of life for children (and other people). The selection of topics soon differed according to age groups, so that there was a separation into children's theater and youth theater.

In 1945 the Theater für Kinder - Bühne Morgenstern was founded in Oldenburg in Holstein, which began as a non-profit touring theater to play in schools. This stage is therefore the oldest still existing children's theater in Germany.

The Young World Theater in Leipzig is the oldest professional children's and youth theater in Germany. On November 7, 1946, the first play, Erich Kästner's Emil and the Detectives, was performed. This day was assumed to be the date the theater was founded in the absence of more precise dates.

Today's Theater Junge Generation (TJG, also tjg) was founded in October 1949 under the name Theater Für Kinder, Dresden, Deutsche Volksbühne and with the play Tobias Ahoi! Founded by Marie-Louise Kendzia on November 11, 1949, before moving to Dresden-Cotta in 1950 . On March 9, 1950, the theater was renamed Theater of the Young Generation . Since the city ​​of Dresden's puppet theater was affiliated in 1997, the TJG has been Germany's largest children's and youth theater. On December 16, 2016, it moved to a new building in the Mitte power station .

The second largest independent children's and youth theater is the Theater an der Parkaue in Berlin-Lichtenberg . Under the direction of Hans Rodenberg , it was founded on November 16, 1950 as a theater of friendship under the orders of the Soviet military government .

School theater or didactic theater reappear in Brecht as a teaching and learning piece.

The GRIPS-Theater in Berlin (formerly Reichskabarett '' ) and subsequently the Theater Rote Grütze invented the socially committed realistic children's theater at the end of the 1960s (initiated by the political-emancipatory movement), which traditionally invokes Natalia Saz . The youth theater developed from him.

For a long time, GRIPS and Grütze and an increasing number of children's theaters, who saw both of them as their role models, determined the aesthetics and content of the children's and youth theater operating in the FRG. Pieces like the Mugnok Children (GRIPS Theater) or In one does not talk and knick-knacks and Stulle play Frog Prince (Theater red fruit jelly) were formative for children's theater, as You think not in the head (GRIPS Theater) and What does love mean here? (Theater Rote Grütze) for the youth theater.

In 1978 the two students Otto Mayr (actor and student teacher) MichaelLöser (student student and actor) founded the "BUILDING SITE" from Wiesbaden in anticipation of their secure unemployment due to the flood of teachers. Curriculum-oriented theater, to be included in the curriculum at any time! The first problem piece developed with the target group (schoolchildren) ("The short life of Gabi X") on the subject of youth suicide. The children's play ("How to tame a dragon") learning objective "Solidarity" and the youth theater play "HIGHLIFE" on the subject of alcohol and youth were financially supported by the Hessian Ministry of Social Affairs! And also funded by the Hess.Landeszentrale für political education! 6-10 unemployed teachers and actors, played for children and young people in their schools and were out and about in Germany for almost 10 years, with up to 80-200 performances per year! The sponsor was the "Association for the Promotion of Children and Youth Theater in Germany"!

In 1953, the children's and youth theater at the Dortmund Theater was opened as an independent venue. In 2007 a children's opera was built here . 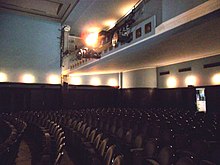 Theater for children in Munich

The Munich Theater for Children was founded by Heinz Redmann in 1967 and introduces around 100,000 children to the medium of theater every year. In 2014 the theater was converted into a non-profit GmbH. The city also has a municipal theater for young people, the Schauburg .

The Theater for Children in Hamburg-Altona , founded by Uwe Deeken in 1968, was the premiere theater for works by children's book authors such as Astrid Lindgren , Michael Ende , Otfried Preußler and Paul Maar . With the premiere of an arrangement of Mozart's Magic Flute for children in 1979 and further arrangements of classical operas for children, the Hamburg theater ushered in a new era of children's theater culture in which even primary school children are taken seriously as competent theater goers.

In 2004, an independent stage for children and youth theater was set up in Stuttgart with the Young Ensemble Stuttgart. Today, the JES is one of the few theaters for young audiences that is funded by the city and the country.

Theater for children in Austria from the 1970s

1973 was the child's Theater in Linz built that into the leading children's theater in Austria developed. In 1995 Birgitta Thelen founded Next Liberty in Graz at the Vereinigte Bühnen Graz as director and since 2001, under Michael Schilhan , it has been one of the 5 most successful children's and youth theaters in German-speaking countries with over 65,000 spectators and more than 200 performances per season.

The roots of Viennese children's theater go back to the 1930s. In 1932 the actor Stefan Wagner and the Realschule director Hans Zwanzger founded the Theater der Jugend. The theater was closed in 1939 and re-established in October 1945. It flourished again in the 1970s when the Vienna Renaissance Theater was rented as a venue. The current director is Thomas Birkmeir. The theater of youth is today considered to be the largest theater for children and young people in Europe. At the end of the 80s, the independent theater scene for young audiences was formed in Vienna , to which around 40 groups belonged. The AG Kindertheater was founded in 1990 and carried out needs surveys, which ultimately led to a resolution by the Vienna City Council on April 26, 2002 on the financing and construction of the THEATERHAUS for CHILDREN . In April 2003, Stephan Rabl was appointed artistic director and the theater was renamed THEATERHAUS for young audiences . On October 1st, 2004, DSCHUNGEL WIEN Theaterhaus opened its doors to a young audience . With over 62,000 visitors in over 550 performances per season and more than 500 different productions since 2004, DSCHUNGEL WIEN has developed into an integral part of the Viennese theater scene.

Since the 1980s, more new theaters for children have been founded, especially the aesthetic and content spectrum broadened:

The German Children's and Youth Theater Meeting has taken place in Berlin every two years since 1989 .

There are, in turn, different forms in the context of children's and youth theater: