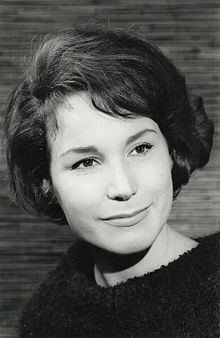 Ursula Herion took part in several movies and television plays in the 1950s . In 1955 she shot the medical melodrama Ich sucht Dich with OW Fischer , in which Fischer also acted as director , screenwriter and producer . The film, in which Herion was seen in the role of the young Jenny, was not released until 1956, after numerous changes and an initially unsecured production. In 1955 she played as a fatherless but happy girl Rosenrot one of the title roles in the fairy tale film Snow White and Rosenrot . In 1958, she took on the title role of the young Marseille beauty Fanny in a television play production by SWF , a film adaptation of the play of the same name by Marcel Pagnol Fanny .

Herion also worked as a stage actress in the 1950s and 1960s . At the Staatstheater Braunschweig she played from October 1958 the double role Shen Te / Shui Ta in Bertolt Brecht's play The Good Man of Sezuan and Miranda in William Shakespeare's late work The Tempest . In December 1961 she appeared at the Munich Volkstheater as Kathi in Johann Nestroy's farce Der Zerrissene .

In the 1960s Herion took part in numerous television productions for Bavarian Radio . She now embodied mainly the role of the young folk actress . She was seen in several recordings of the television series The Comedy Nobility. There she took over the role of the adolescent lover as well as roles that went into the role of the salon lady. In 1963 she played a false Hungarian countess in a comedy nobility production in the folk play Der Schusternazi by Ludwig Thoma . In 1964 she was Brigitte, the beautiful young daughter of Michl Lang , in the popular play The Daughter of Bombardon . In 1969, as Afra, she was the mayor's pretty daughter, played by Alexander Golling . In 1969 she also worked in several episodes of the television series Royal Bavarian District Court , including as an attractive merchant widow and as a young farmer's wife.

Her last role was in 1970 the daughter of the mill landlady in the folk play Alles für die Katz from the Komödienstadel.

From the mid-1950s she worked as a radio play speaker for Bayerischer Rundfunk. For example, in 1956 she could be seen as the daughter Ulla of the Naumann couple, spoken by Dieter Borsche and Winnie Markus , in the play Father buys a car by Christian Bock . In the 1960s she also took part in several plays of the comedy nobility, which was also produced on the radio .

She was married to the actor and director Olf Fischer , who also directed several films and television productions in which Herion took part. Herion died by suicide . The motive for her suicide is not known. She and her husband, who died in 1998, were buried in the Obermenzinger Friedhof in Munich (grave no. 32-1-52). Her daughter Julia Fischer is also an actress.

The grave of Ursula Herion (under her real name Fischer) and her husband Olf Fischer in the Obermenzing cemetery in Munich.

Unless otherwise stated, the producing broadcaster was Bayerischer Rundfunk.