Lette was the son of a farmer who sent him to Berlin to attend the grammar school in the gray monastery , where he also passed his school leaving examination. Then he studied from 1816 at the Universities of Heidelberg , Göttingen and Berlin law . During his studies in 1816 he became a member of the Teutonia Heidelberg fraternity . In Berlin in 1818 he was involved in founding the old Berlin fraternity . In addition to law, Lette also dealt with political science and Hegel's philosophy . As a fraternity member and visitor to the Wartburg Festival , he was arrested as part of the demagogue persecution and sentenced to a low prison term. After the sentence was lifted early, he was auscultator and assessor from 1821 . First he worked at the Frankfurt (Oder) court and later in Landsberg . In 1825 he was employed by the General Commission of Soldin as a senior judge, and in 1834 he was promoted to the council in Stargard . In 1835 he was appointed higher regional judge in Posen and in 1840 he was appointed conductor of the people's and agricultural department in the government of Frankfurt (Oder). In April 1843 he was appointed lecturer in the Ministry of the Interior. From January 1844 to 1854 he was a full member of the Landesökonomiekollegium . In 1845 he was involved in the founding of the revision committee for regional cultural causes, whose first presidium he took over.

At the first congress of German economists in 1858, which he helped bring about, he was elected to the “permanent deputation” of the congress.

In the Prussian House of Representatives, Lette first joined the von Vincke faction , belonged to the Left Centrum faction from 1863 to 1866 and joined the National Liberal Party in 1866 . In 1867 he was elected to the North German Reichstag for the constituency Frankfurt / Oder 3. In the early summer of 1868 he fell ill and died six months later. 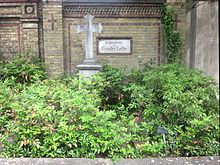 Wilhelm Adolf Lette died in Berlin in 1868 at the age of 69. He was buried in a hereditary funeral in cemetery III of the Jerusalem and New Churches in front of the Hallesches Tor . In front of the grave wall made of yellow and red clinker is a high-pedestal marble cross. By resolution of the Berlin Senate , the last resting place of Wilhelm Adolf Lette (grave location 322-EB-128) has been dedicated to the State of Berlin as an honorary grave since 1958 . The dedication was last extended in 2016 by the now usual period of twenty years.

Bust of Lette at the main entrance of the Lette Association

Lette founded the Association for the Promotion of Higher Education and Employment Ability of Women in Berlin in 1866 , today the Lette Association , which he also chaired. As the first institution of this kind, the Lette-Verein became a model for all vocational training centers for women in Germany. From 1872 - under the direction of his eldest daughter Anna Schepeler-Lette  - the association becomes a school sponsor. The Lette Association's school has been located in Berlin-Schöneberg on Viktoria-Luise-Platz since 1902 . In several vocational schools, young women and a. Trained in commercial professions, photography , as a medical-technical assistant , in a specialist class for fashion and as housekeeping managers.

Association and board memberships