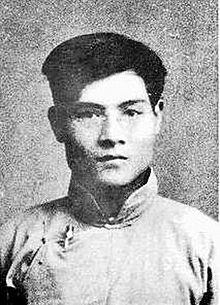 Zhang Guotao, photo from before 1927 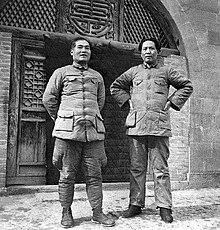 Zhang Guotao with Mao Zedong in 1938

Zhang Guotao ( Chinese  張國燾  /  张国焘 , Pinyin Zhāng Guótāo , W.-G. Chang Kuo-t'ao ; born November 26, 1897 in Pingxiang ; † December 3, 1979 in Toronto ) was one of the first leaders of the Communist Party of China and military leader during the Chinese Civil War . He was a competitor of Mao Zedong within the party . After he was defeated in the power struggle, he went over to the Kuomintang and finally went into exile in Canada .

Zhang was born in the Pingxiang Mining City in western Jiangxi Province to wealthy Hakka landowners. The border region between Hunan and Jiangxi was shaken by uprisings in Zhang's childhood aimed at overthrowing the Qing Dynasty and restoring the Ming Dynasty . The violence that Zhang experienced shaped him, although those around him sympathized with the aims of the insurgent secret societies . Zhang received a classical Confucianist education in Pingxiang and a western education in Nanchang . From 1916 he studied at the University of Beijing , where he made the acquaintance of the later first Communist General Secretary Chen Duxiu and where he came into contact with Marxist and communist ideas through Li Dazhao , one of the first Marxists in China: From 1920, Li led a study group for Marxist theory in Beijing, in which Zhang, Zhao Shiyan , Deng Zhongxia , Qu Qiubai , Yun Daiying and Mao Zedong also took part. He took part in the May Fourth Movement, in which young Chinese in particular protested the effects of the Versailles Peace Treaty on China. He then became a well-known student leader and represented Peking University in the newly formed student associations. Influenced by the October Revolution in Russia , Zhang became a founding member of the Communist Party of China in 1921. At the first Congress of the CPC in Shanghai , which was held under Zhang's chairmanship, he was elected one of the three members of the Central Committee. Zhang was the only one of the later Communist Party leadership who had actively participated in the movement's demonstrations. In late 1921 and early 1922, Zhang represented the Chinese Communist Party at Comintern conferences, where he also spoke to Lenin . In addition, he was a leading member of the National General Workers' Union (中華全國總工會), which he had helped found on May 18, 1925, and editor-in-chief of the union newspaper Arbeiter-Wochenzeitung (勞動 周報). Because of his union activities - among others he led several major strikes in the railroad and in the textile industry with Li Lisan and Liu Shaoqi - he was arrested during the era of the warlords , because the warlord Wu Peifu was for his troops- , Loot and material transportation heavily dependent on the Beijing-Hankou Railway .

When the Comintern representatives tried to win the leadership of the then still very small Communist Party for the First United Front with the Kuomintang, Zhang - like the other members of the Central Committee - rejected this idea. The Comintern representative Maring had to establish the united front with reference to the party discipline and the financial dependence of the CP on the Comintern by force. Zhang protested against the decision that all Communist Party members should automatically join the Kuomintang , as a result of which he lost his post as party organizer to Mao Zedong . Zhang became a member of the Kuomintang Executive Committee, from which the Communists were expelled in December 1925. During Chiang Kai-shek's northern expedition , he led the trade unions in Shanghai and later went to Wuhan , then the center of the left wing of the Kuomintang, he was also an active participant in the May 4th Movement by organizing strikes, which mainly targeted the in China operating British companies should meet. After the break between the KMT and the communists, Zhang was one of the organizers of the failed Nanchang uprising in 1927, even though the Comintern originally commissioned him to cancel it. Over time, Zhang served in several positions in the Communist Party: he was director of the organization department, leader of the delegation to the Comintern, vice chairman of the Chinese Soviet Republic and political commissar of the Red Army . From 1928 on he was a representative of the Communist Party at the Comintern in Moscow, from where he did not return until early 1931. In 1931 he was sent by the party to the remote Eyuwan Soviet in the border area of Hubei , Henan and Anhui , which was of secondary importance to the party because the government of the Chinese Soviet Republic was in the Jiangxi Soviet . In November 1932, Zhang was forced to relocate his Soviet to northern Sichuan and Shaanxi under pressure from government forces . In both bases he carried out bloody political purges to enforce his absolute authority, but his politics also brought a certain economic prosperity with it. On November 7, 1931, Zhang was appointed Vice President of the Chinese Soviet Republic.

When the communist troops of the Jiangxi Soviet broke out of their vicinity by the troops of Chiang Kai-shek and the Long March began, the union with the 4th Red Front Army of the Eyuwan Soviet under Zhang Guotao was one of the possible escape targets. In March, the troops commanded by Zhang Guotao and Xu Xiangqian - five armies with 14 divisions and more than 70,000 soldiers, including a women's regiment - broke out of their base and headed for northwest Sichuan. In June, the exhausted 1st Red Front Army of Mao Zedong, which was on the verge of annihilation, encountered the significantly better equipped and numerically stronger troops of Zhang Guotao. On June 24, Mao and Zhang met in Lianghekou to discuss how to proceed, in particular a strategic plan for the two armies, in the presence of other Politburo members. There was a falling out between the two leaders here and at another conference in Maoergai on August 5th. Zhang wanted to create a new communist base in ethnic minority areas of Sichuan, but Mao had learned how difficult it was to survive in these very regions. Mao's plan was to march via Xikang to Xinjiang , where the routes to Soviet support were short. This plan was abandoned when it was learned that there was a communist base in northern Shaanxi , commanded by Liu Zhidan . Zhang also demanded more influence - after all, he commanded many more soldiers than Mao and his followers - and was able to claim some party positions for himself. It was decided to split the army. Zhang and Zhu De first moved with the western army column to the border with Qinghai , and there they turned to the south, as the way to Gansu was blocked. In Garzê , Zhang tried between November 1935 and June 1936 to set up a new party center. On October 5, he had already founded a new Central Committee and expelled Mao Zedong, Zhou Enlai , Bo Gu and Luo Fu from the party. He even planned to have Mao and some of his supporters killed if necessary, but this was revealed by Ye Jianying and Yang Shangkun . Ye and Yang went over to Mao's faction and took Zhang's code books with them, so that Zhang lost contact with the Comintern and Mao practically regained control of the party. From there Zhang moved north again, almost to the border of Shaanxi, but in Huining it was decided to march west again. In late November, Zhang arrived at Mao's base in northern Shaanxi. In January 1937, while trying to establish contact with the Soviet Union, Zhang's troops were attacked in the Gansu Corridor by the troops of the Muslim warlords Ma Bufang , Ma Hongbin and Ma Zhongying and almost completely wiped out. Few soldiers, including Li Xiannian and Xu Xiangqian, were able to make their way to Yan'an . In the meantime, the Second United Front between communists and nationalists had been agreed, which presumably saved Zhang.

After Zhang almost completely lost his troops in Sichuan, Mao was no longer in danger. In September 1936 he therefore received the post of Vice President of the Shaanxi-Gansu-Ningxia border government, but allied himself with the 28 Bolsheviks around Wang Ming against Mao. In 1937 he was criticized at a meeting of the enlarged Politburo, so that in early April 1938, in anticipation of his removal from office, he defected to the Kuomintang. While there, he worked at Dai Li's Special Political Affairs Investigation Bureau , which was inefficient in fighting the communists, and later with Zhu Jiahua . After the defeat of the nationalists in the civil war, he went into exile in 1948, first to Taiwan , 1949 to Hong Kong , and from 1968 to Canada . There he wrote his autobiography, which is an important source for research into the early stages of the communist movement in China.