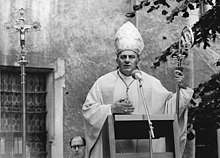 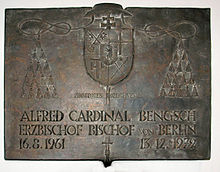 Gravestone in the lower church of St. Hedwig's Cathedral

Alfred Bengsch was born in Berlin-Schöneberg. He was the older brother of Georg, formerly provost in Greifswald at St. Joseph , and Hubert Bengsch and uncle of the actor Hubertus Bengsch . Alfred Bengsch, son of a Catholic church leader, grew up in the Schöneberg parish of St. Elisabeth. From 1926 to 1950 he lived with his parents in the Tempelhofer Weg 26 apartment building, on which a Berlin memorial plaque was placed for him in 1995. After attending grammar school in 1940/1941, Bengsch studied Catholic theology in Fulda . In 1941 he became a soldier in the Wehrmacht and was an American prisoner of war from 1944 to 1946 .

From 1946 to 1950 he continued studying theology at Neuzelle Abbey and on April 2, 1950 received the sacrament of ordination by the Bishop of Berlin Konrad Cardinal Preysing . Until 1954 he was a chaplain in Berlin. By 1956, studied Bengsch in Munich and Erfurt and received his doctorate for Dr. theol. From 1957 to 1959 he was a lecturer in dogmatics and homiletics in Neuzelle. In 1959 he was appointed Regens of the Erfurt seminary .

On May 2, 1959, Pope John XXIII appointed him . as titular bishop of Tubia and auxiliary bishop in Berlin with seat in East Berlin . The episcopal ordination donated Bengsch Julius Cardinal Döpfner on 11 June of the same year; Co- consecrators were Auxiliary Bishop Friedrich Maria Rintelen from Magdeburg and the Bishop of Meißen , Otto Spülbeck . Bishop Bengsch's motto was Adiutores gaudii vestri (“Helpers of your joy”, 2 Cor 1.24  EU ). In 1961, Bengsch was elected Bishop of Berlin to succeed Julius Cardinal Döpfner.

1962 was him by John XXIII. bestowed the personal title of archbishop . From 1962 to 1965 he took part in the Second Vatican Council in Rome . Pope Paul VI took Archbishop Bengsch on June 26, 1967 as a cardinal priest with the titular church of San Filippo Neri in Eurosia in the college of cardinals . Bengsch was an advocate of the course of political abstinence of the Catholic Church in the GDR . In 1976 he became chairman of the Berlin Bishops' Conference , which emerged from the Berlin Ordinarienkonferenz, which he had chaired since his appointment as Bishop of Berlin in 1961.

Bengsch was Grand Cross Knight of the Order of the Holy Sepulcher in Jerusalem .

Alfred Cardinal Bengsch was buried in the lower church of St. Hedwig's Cathedral . There is a memorial stone on the St. Hedwigs cemetery in Berlin-Alt-Hohenschönhausen .

Bishop Bengsch differed significantly from his predecessors in his administration. As a strategist, he was challenged above all in the political and economic questions and worries of everyday life. Its theological and pastoral side was formative for all Catholicism in the GDR in the 1960s and 1970s. His focus was always on pastoral care and the gathering of believers around the celebration of the sacraments . He was also always concerned with the priests and bishops, whose responsible and leading role he often emphasized. Other focal points were the concrete promotion of the training of community helpers and youth work (e.g. religious instruction ), but also the symbolic dimension of his actions as a bishop.

His most important goal was unity - visible in the diocese of Berlin. He represented this on many occasions: sermons , prayer and worship orders , in church building , in structural and personnel decisions. It is also clear in the planning and implementation of his business trips to West Berlin and the trips abroad, where Bengsch always set signs of the unity of his diocese and the Catholic Church in the GDR. He always made sure not to let the state instrumentalize him for its goals.

Auxiliary Bishops in Berlin (since 1923)

Bishops and Archbishops of Berlin (since 1930)