The old town of Schwerin is a district and the historical core of the Mecklenburg-Western Pomerania state capital Schwerin . 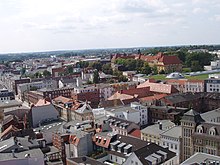 View from Schwerin Cathedral to the old town

Dilapidated half-timbered houses on the Great Moor in 1975

Records of a castle in a freshwater lake exist as early as 965, which historians attribute to Schwerin. In the face of the overpowering approaching troops of Henry the Lion , the Obotrite prince Niklot burned the castle down in 1160. After Heinrich's victory over Niklot, the city of Schwerin was founded and the castle was rebuilt. The first cathedral is donated around 1171. The city was initially secured by a wooden wall. The mill pond (later: Pfaffenteich ), which was created by the damming of the Aubach since 1284 , once extended to the south of today's Marienplatz . The city was accessible via the Grafenmühle dam located there .

The name of the Tappenhagen street was first mentioned in 1403, but it did not belong to the city of Schwerin until the end of the 15th century. The expression "-hagen" can be traced back to the Germanic word "hago" and denotes a fenced area. Tapping, on the other hand, either stands for the Low German word "Zapfen" or goes back to a personal name. Today only a narrow path on the - Großer Moor - is evidence of the beginning of the former course.

The wooden city fortifications were not replaced by a wall until the 14th century, which did not enclose the shelves north of Schwerin that were developing parallel to the old town . Later a new entrance was created through the Schmiedetor and the Schmiedestrasse . Until the end of the 18th century, the city fortifications were further developed using the water resources and gradually torn down again as the residential buildings expanded. Remains of the city wall have been preserved in Burgstrasse to this day.

In the fires in 1531, 1558 and 1561, large parts of the old town's buildings were destroyed. With the exception of the Schwerin Cathedral , the cathedral courtyard and some parts of the castle, no buildings have survived that were built before the 17th century. The old town is shaped by the historicism of the 19th century. When the ducal residence was relocated from Ludwigslust to Schwerin in 1837, both the economy and construction activity revived. Under the influence of Georg Adolph Demmler , appointed court architect in 1841 , representative buildings and the redesigned Schwerin Palace were erected.

The Pushkin-Str. - Großer Moor - Bader Str. - as well as the Salz Str. Were once referred to as the Schwerin old town quarter. In the corner house of Pushkin, - to Salz Str., There was a confectionery shop "Schogette" which, like another one in 1977, was demolished - a lot of victims were blown up. Since 1968, new residential buildings have been built in prefabricated construction on the Great Moor in the old town, after old, neglected buildings there were demolished and piled up on the Burgsee. The monotonous appearance of the prefabricated buildings was only loosened up by maintaining the historical street layout, partially clinker facing the facades and the beveling of the roofs. Only in the 1980s were some half-timbered buildings renovated.

Extensive renovations to the castle and historic buildings in the old town only took place after years of decline after the political change . With this, inner-city shopping centers and passages such as the Burgseegalerie , the Wurm and the Schlossparkcenter were created .

The central transfer point for local transport in the city is located at Marienplatz. Three of the four tram and several bus lines meet here. The main station is located in the neighboring Paulsstadt district, the Schwerin Mitte stop, which was established after 1990, is on the border with Feldstadt.