Ronald Belford "Bon" Scott (born July 9, 1946 in Forfar , Angus , Scotland , † February 19, 1980 in London ) was a British - Australian singer and songwriter . He gained fame as the singer of the Australian rock band AC / DC from 1974 until his death in February 1980. The nickname "Bon" has its origins in the term Bonnie Scotland for "magnificent Scotland".

Scott lived with his parents Charles and Isabelle Scott in Kirriemuir, Scotland (near Forfar ) until the family emigrated to Australia in 1952. First they moved to Sunshine / Melbourne and in 1956 to Fremantle , where Scott learned drums and bagpipes in the Coastal Scottish Pipe Band WA . He left school at the age of 15 and then got by with various jobs as a postman, truck driver and bartender.

He had his first artistic engagement with the band The Spektors , in which he sang and played drums. In 1967 he moved to The Valentines , where he was co-lead singer and had his first chart success. After moving to Adelaide, he joined the psychedelic blues band Fraternity , where he sang and played the flute. With this band he recorded two albums. In 1971 the band played a concert with Geordie , his eventual successor at AC / DC, Brian Johnson . In 1972 he married Irene Thornton, whom he met after a concert. The marriage was childless and divorced two years later. At the beginning of 1974 he survived a serious motorcycle accident.

In 1974 Scott became a singer for AC / DC, replacing Dave Evans . According to the co-singer of The Valentines , Vincent Lovegrove, he gave Scott the band; However, sometimes you can also read that Scott became aware of AC / DC through a newspaper advertisement.

Scott had a penchant for fast cars like the Porsche 911 . His excessive drinking was just as notorious. The extended tours with AC / DC through Europe and the USA towards the end of the 1970s were more and more common for Scott only with the help of stimulants and sedatives. On the extensive "Highway to Hell" world tour, AC / DC u. a. on September 1st 1979 together with the Scorpions , Cheap Trick , Molly Hatchet and The Who an open air concert at the Zeppelinfeld in Nuremberg . Parts of the tour (including the concert in Paris) were filmed and released as a movie " Let There Be Rock ". AC / DC's last live concert with Bon Scott took place on January 27, 1980 in Southampton , England . This was followed by a TV appearance on the British TV show “Top of the Pops” on February 7th - the band played the song “Touch Too Much” there - and a TV appearance in Madrid on February 9th, 1980. 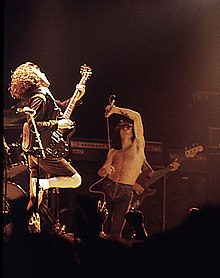 Bon Scott with Angus Young at a concert at Ulster Hall

His last recording was made just six days before his death during a jam session with the band Trust in London, where they played the 1976 AC / DC classic Ride On .

In February 1980, while work on the new album was already beginning in London, Scott went on a drinking tour with his friend Alistair Kinnear in the London borough of Camden Town. When they drove home from the “Music Machine” club, later called “ Camden Palace ”, after the alcoholic evening , Scott fell asleep in the back seat of Kinnears Renault 5 . His friend wanted to take Bon Scott to his apartment at 15 Ashley Court, Westminster, but could not wake him in the car and drove to his home at 67 Overhill Road, East Dulwich, where he spent the night with Scott in the back seat of the car let sleep. When he tried to wake him that morning, he found the singer lifeless. It is rumored to this day that Scott choked on his vomit, but it cannot be confirmed. At the nearby King's College Hospital , to which Alistair Kinnear took Scott, only his death could be diagnosed on arrival.

The official cause of death was given as " alcohol poisoning " or "accident". However, it is sometimes argued that Bon Scott died by freezing to death in the car.

After his death, AC / DC dedicated the album Back in Black to him with the new singer Brian Johnson , which went down as the second best-selling album in music history.

Scott's urn was buried in the Fremantle Cemetery's Memorial Garden in Australia. The grave is now owned by the National Trust . Forty years after Scott's death, fans continue to make a pilgrimage to his grave, hold drinking bouts there and leave the caps of their bottles on the grave slab in his memory (see photo). Shortly before Scott's 60th birthday, strangers stole the plaque that the family had installed on the grave slab in late June 2006.