Building of the Frankfurt Stock Exchange

History of the Frankfurt Stock Exchange 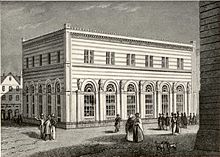 Interior of the Old Stock Exchange, 1845

→ For the history of the Frankfurt stock exchange up to the construction of the Neue Börse, see: Alte Börse (Frankfurt am Main)

Since 1843, after having been rented for almost a century and a half in the Braunfels building on Liebfrauenberg , the Frankfurt Stock Exchange had its own stock exchange building for the first time.

At that time hardly anyone suspected how fast Frankfurt would soon grow ( urbanization , demography of Germany ) and how quickly the importance of stock exchange trading would soon grow. After the founding of the empire in 1871, there was an economic upswing in Germany (see founding years ) and very rapid industrialization. The building of the old stock exchange appeared clearly undersized.

It soon became clear that a new building would be built in the northwest of the Neustadt, on the area of ​​the early modern facilities of the Rahmhof and Taubenhof , which, like numerous houses, had to make way for the openings in the surrounding streets. In 1879, the New Stock Exchange designed by the Frankfurt architects Heinrich Burnitz and Oskar Sommer was inaugurated.

Despite the emergence of stocks with the industrial revolution , the focus of trading on the Frankfurt stock exchange continued to be on trading in bonds .

During the First World War , trading in foreign securities was gradually stopped. The good international contacts of the Frankfurt Stock Exchange suffered as a result. During the inflation (1914–1923) the purchasing power of securities that expressed a monetary value plummeted. In contrast, stocks became a much sought-after object of speculation.

During the time of National Socialism , the Nazi regime severely hindered the free market. According to the will of the rulers, the capital of the investors should largely benefit the armament of the armed forces or later the war economy and could therefore no longer be invested in larger bonds or stocks. The Reich Ministry of Economics and the Reichsbank were important organs of Nazi policy.

After the currency reform in 1948 and with the German economic miracle , the Frankfurt Stock Exchange rose again in international validity. With the permission to trade foreign securities in 1956, the stock exchange was able to take the top position in Germany again. The Frankfurt Stock Exchange accompanied the so-called economic miracle in Germany in the 1950s and 1960s and, according to its own statements, had an important function as a capital broker for the reconstruction of the country.

In 1969 the stock exchange began to process parts of its database electronically. In 1988 the DAX share index was introduced. 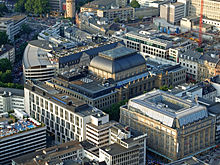 Stock Exchange from the Main Tower

Reinhard Dachlauer : Bulle & Bär , bronze sculptures on the stock exchange as a symbol for the rising and falling share prices

Glance into the trading room

From October 2006 to February 2007 the trading floor of the Frankfurt Stock Exchange was restored and optically and technically renewed. The previously rectangular barriers are now round. Two separate workplaces were set up under the well-known DAX board for IPOs. A new light ceiling was installed. The price display ("DAX board") was retained because of its recognition value.

The conversion took place while trading continued. The television stations reported from the other rooms, mainly the former pension hall. The visitor gallery was open during the work, but only allowed a limited view of the construction site. After four months of construction, the trading hall was reopened on February 26, 2007.

End of trading on the floor

In May 2011, has been trading floor of the Frankfurt Stock Exchange after 425 years and applied to the electronic trading platform as of 23 May 2011 Xetra transmitted. The activities of the previous lead brokers were taken over by computers, and the former exchange brokers became so-called specialists who control the trading system and, if necessary, provide liquidity. There are ten specialists, as of 2018, registered on the Frankfurt Stock Exchange.

Several television companies report live several times a day from the trading room of the Frankfurt Stock Exchange. The Telebörse was the pioneer of detailed live reporting from 1987 on with Sat.1 , today with n-tv . In addition, the ARD is represented by the Hessischer Rundfunk . Among other things, the program Börse vor Acht will be produced, which will be broadcast shortly before the main edition of the Tagesschau in Erste . The television stations DAF , Bloomberg Television , ZDF , n-tv, Welt (formerly N24 ), CNBC Europe , Inside Wirtschaft, Handelsblatt and DW-TV also report on the stock exchange.

The independent market supervision in Germany is made up of the Trading Surveillance Office ( HÜSt ), the stock exchange supervisory authority of the Hessian Ministry of Economics, Transport and Regional Development and the Federal Financial Supervisory Authority ( BaFin ).