Colima is a city in western Mexico , near the Pacific coast at the foot of the Nevado de Colima volcano (4330 m) with 137,383 inhabitants (2005). It is the capital of the state of the same name . In Mexico it is popularly known as La Ciudad de las Palmeras , the city of palms. It is particularly popular with tourists as a starting point for day trips.

The annual average temperature is 25 ° C, and the annual rainfall values ​​fluctuate on average between 63.7 and 94.9 millimeters. The period from July to September is particularly rainy. 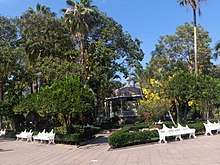 The history of Colima begins with the colonization, although the name Colima comes from the Nahuatl word "Colliman", which means "place of our ancestors" or "place of the fire god". On July 25, 1523, the Villa de Colima was founded on the site of Caxitlán by Gonzalo de Sandoval on behalf of Hernán Cortés and thus became the second city council in New Spain. This marked the beginning of the colonial era in the region. Only four years later, on January 20, 1527, the city was relocated to its current location, as the original location was unsuitable.

From 1551 to 1554 Lorenzo Lebrón de Quiñones visited around 200 places in the province in order to get a grip on the multitude of colonial injustices against the indigenous population. He therefore settled around 200 indigenous families from Chiapa and other places in Colima, among other places, who founded the Almoloyan community in this way.

1572 is one of the earliest references to the Feria de Colima , a fair that still takes place every year on All Saints' Day and is one of the largest and most beautiful in Mexico.

In particular, the development of the churches in Colima can be traced back to important impulses from a Mexican folk hero: Miguel Hidalgo y Costilla , the famous author of the so-called “ Grito de Dolores ”, which is still proclaimed throughout Mexico on the national holiday today. Miguel Hidalgo spent several months in Colima in 1792 in order to significantly improve the church system and, not least, earned the recognition of the clergy of that time. This is also the reason why Colima was one of the first cities in which insurgents arrived in 1810 to carry the spirit of the new Mexico to the people. The Hidalgo Theater , built in 1871 on the site of the former residence of Miguel Hidalgo, still bears the name of the famous Colima resident.

Colima was part of the administration of Guadalajara until 1821 and was finally recognized as independent from Jalisco with the constitution in 1824 . In the same year Colima received city rights. But only the constitution of 1857 recognized Colima as the capital of an independent state within the United States of Mexico. The first president of Colima was General Manuel Álvarez . Since then, Colima has been growing steadily and is still one of the most prosperous states in Mexico. With the development of modern transport routes such as the railroad (1889) and airport (1912) as well as the opening of the university (1940), further economic growth impulses were set. Nevertheless, Colima has retained an original way of life, which is reflected in the customs and traditions. Colima is a modern city with tradition. However, it is also located in one of the most earthquake-prone areas on earth. On January 22nd, 2003, the earth shook in the Colima region. The earthquake , with a magnitude of 7.6 on the Richter scale , destroyed around 2,000 houses and damaged around 6,600. 29 people fell victim to the quake and 10,000 were left homeless. It was the heaviest earthquake after the great Mexico City quake in 1985. 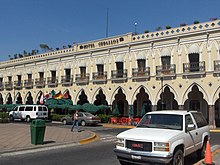 Portal in the center of Colima

Colima is the capital of the state of the same name. In the 2006 elections, the PRI won with Mario Anguiano as mayor candidate, replacing his predecessor Leoncio Alfonso Morán Sánchez ( PAN ) in the town hall in October 2006 .

Colima and Villa de Álvarez de facto form a common city, which, however, has two different political city administrations. In the past and present, these two cities had different government parties, which on the one hand led to insufficient cooperation on common problems (e.g. crime) and on the other hand created a competitive situation between the two cities.

Colima's economy is mainly focused on the processing of agricultural products. In addition, due to its role as the state capital, Colima has the headquarters of important regional companies and offices of national companies.

Colima Airport (International Airport Code: CLQ) offers travelers a connection to Mexico City several times a day . Another important connection for goods traffic is the railway line and the motorway between Manzanillo and Guadalajara . For travelers, there are also daily national connections from the bus station to destinations all over Mexico.

Taxis are relatively cheap in Colima. During the day, depending on the destination within the city limits, the price should not exceed $ 30 and at night $ 40. Another very inexpensive way of getting around is the area-wide bus system in Colima. There are no fixed bus schedules or stops (with the exception of the large avenues and in the center), you get on or off at the corners. Without exception, all bus routes are circular; H. there is no opposite direction of the same line. The small bus station Central de los Rojos is close to the center and offers trips to the surrounding area. It is also served by most urban lines. Rojos is therefore an important hub for changes within the city and for excursions into the surrounding area (to Manzanillo).

The city has gained supraregional importance in recent years, primarily through the public University of Colima . In the city of Colima is the largest campus of the Colima University. Telematics, nursing, medicine, social work, psychology, educational sciences, market research, philology, fine arts, law and natural sciences are offered here, as well as the integrated courses of business administration / administrative sciences and political / social sciences.

Colima, the "city of palm trees", is an "insider tip" among tourists. On the one hand, the city offers all public services, such as a sufficient number of hotels and hostels, many bars and restaurants, but on the other hand it is not overcrowded by tourists and has retained a typical, original character. Colima is a good starting point for excursions and activities in the whole region. Colima is also considered one of the safest cities in Mexico for tourists. The return flight from Germany to Colima costs around 1,000 euros per person (2006) and is therefore relatively cheap for the Mexican west coast. The main season is between November and February. 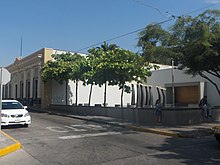 The Colima Art Gallery: on the left the historic facade, on the right the new building

The architecture of the Pinakothek says a lot about Colima: Due to the frequent earthquakes, collapsed parts of the building had to be rebuilt again and again. They should fit in harmoniously with what is still there. Equally interesting are therefore not only the changing exhibitions and permanent exhibits such as paintings and sculptures by regional and international artists, but also the architecture, which combines colonial style with modern elements. You can see works by Rafael Coronel , Emilio Rosenblueth , Alfonso Michel and Leopoldo Praxedis Morales . 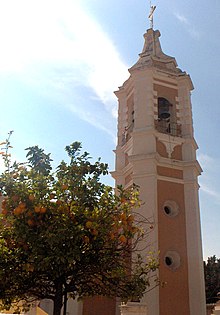 In this church, actually "San Felipe de Jesús", women from Colima met in the 17th century, who pursued charitable aims under a religious vow , but without being nuns. El Beaterio is a good example of the Baroque architecture of the 18th century with a polygonal tower. The decoration inside is no longer in its original state, but has been replaced by decorations from a homestead in Oaxaca .

The Andador Constitución; in the background the cathedral and the presidential palace

The Andador Constitución is a passage in the center of Colima. Here you will find local artists, the so-called "Tlacuilos", and various boutiques and shops. It is also a popular meeting place for local chess fans.

In 1556, with the permission of Lebrón de Quiñonez , around 200 indigenous families from Chiapa and other places settled in Colima . This is how the Almoloyan settlement was born. The center of this settlement was the Franciscan monastery , which was founded by the brothers Honorato and Jerónimo de la Cruz. The frequent earthquakes have gradually collapsed the original building since 1818. All that remains are an archway and two walls. On closer inspection you can see that the stones must have come from another building - the age and indigenous expression indicate a pre-Hispanic origin.

The Hidalgo Theater, built in 1871 (on the property where Don Miguel Hidalgo y Costilla, the father of independent Mexico lived in 1792 ) could seat up to 650 spectators for over six decades. The interior of the theater is particularly worth seeing because of the paintings by Frank Renoult .

The Presidential Palace in Colima

Under General Doroteo Lopez , the Colimas prison was demolished in the 19th century and the presidential palace was built in its place. The architect of the neoclassical building is Don Lucio Uribe, who also built the Hidalgo Theater and the Colima Cathedral. The tower clock, which was made in Germany in 1841, and the famous paintings by Jorge Chávez Carrillo with historical motifs inside the palace are particularly worth mentioning .

According to documented sources, a church has stood here since 1525. Initially made of wood, it was rebuilt in 1894 by Don Lucio Uribe in the classical style. Inside the Cathedral of Colima there are several paintings and a sculpture of San Felipe de Jesús , the city's patron saint since 1668. On October 12, 1998, the cathedral was declared a minor basilica by Pope John Paul II . It is the first church in all of Latin America to be dedicated to the Virgin of Guadalupe. For this reason, the celebrations on the name day of the Virgin (December 12th) in Colima are particularly splendid.

In the middle of the 19th century the Mercedario monastery fell into disrepair. Therefore, the responsible priest José Ramon Arzac decided in 1871 to rebuild the church a few blocks further. The church is one of the few stone buildings and legend has it that the faithful brought the stones one by one from the nearby river bed. This is probably also the reason why the construction was not finished after more than 60 years and therefore fell victim to an earthquake . Although the reconstruction began immediately, another earthquake destroyed parts of the building again 10 years later. From this point on, it was decided to continue the original construction using conventional construction methods. Here, too, you can find the mixture of modernity and tradition that symbolizes Colima.

The legend of the Piedra Lisa says that anyone who uses this stone as a slide will stay in Colima. Around the stone is a large leisure facility.

May 2013 it was announced that an approximately 2000 year old grave site with 28 bones of children and adults plus grave goods was found in Colima.

In the immediate vicinity of Colima is Rancho de Villa, a small suburb of Colima. A popular pilgrimage church is located here. The weekly market with local specialties takes place every Tuesday.

Comala , named " Pueblo Mágico " (magic village), and known for its coffee and the art of baking.

The volcano can be seen from afar. Local guides offer tours to explore the volcano. In the national park it is possible to stay in tents. There are several small, partly thermal lakes around the volcano .

In the "Reserva Ejidal de Terrero" more than 300 tropical bird species can be observed.

The Ecological Center for Turtles was founded in Armería in 1993 .

The "Campo Cuantro" on Cero Grande is a site of marine fossils .

In Ixtlahuacán there is the stalactite cave "Gruta San Gabriel"