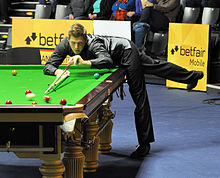 Daniel Wells at the German Masters 2013

Wells was already very successful as a youth, he reached the semi-finals of the U-21 World Cup in 2007, was number 1 in the Juniors in Wales and played for the Welsh senior team. He was then awarded the then first-ever Paul Hunter Scholarship of the World Snooker Association , which enabled him to train with professional players at the World Snooker Academy in Sheffield for a year.

In the following PIOS tour, he secured 6th place in the overall ranking with a semi-final and a quarter-final, and thus qualification for the 2008/09 professional tour . In his first year as a professional he played quite successfully in the qualifying rounds for the major tournaments and barely missed participation in the main round of the World Cup after a 9-10 defeat by Barry Hawkins . Even without participating in a final round in a major tournament, he maintained his Main Tour place as 70th in the world rankings over the annual ranking. In the following season, however, he was usually defeated very early in the tournaments and rarely made it to the second round. He did not collect enough world ranking points so that he had to leave the professional tour.

Daniel Wells then had his greatest success to date at the Paul Hunter Classic 2010 . As an amateur, he reached the semi-finals of the minor ranking tournament. Also in Germany, he reached the main round of a full world ranking tournament for the first time in the same season at the German Masters 2011 after receiving a wildcard and beating Liu Song in the qualifying round .

He returned to the Main Tour in the 2011/12 season through being nominated by the Welsh Federation. He also won the EBSA European Championship , which would have entitled him to take part in the professional tour. However, the season was quite negative for him due to numerous first round defeats. In the end it wasn't enough for Wells to stay on the Main Tour. However, he was able to qualify as the winner of his group for the 2012/13 and 2013/14 seasons at the second Q School tournament in 2012 .

In his third year as a professional, the Welshman achieved five first round victories, including the German Masters 2013 and the Welsh Open 2013 , but again did not make it into the main round of a tournament and finished the season in 87th place. The following year, he came in four Opener wins never beyond the second round in world ranking tournaments. Even three participations in the round of 32 at PTC tournaments did not bring enough points to keep the tour participation after two years. He only reached number 100 in the world rankings and could not play his way back on the main tour in the following Q School. After all, he had once reached the semi-finals of his group in the Q School and was therefore invited as a reserve player with amateur status to the qualifying tournaments of the professional tournaments in the 2014/15 . At the Australian Open he reached the second round as the best result of the season.

Establishment on the Main Tour

At Q School he succeeded in qualifying for the Main Tour again for the next two years by winning the group over Alexander Ursenbacher . After a changeable start to the 2015/16 season with a top 32 placement at the Paul Hunter Classic and 4-0 victories over the top 32 players Anthony McGill and Xiao Guodong , he made it to the International Championship for the first time as a professional to the main tournament. At the PTC tournament in Bulgaria he was in the round of 16. In the following year he survived the first main round at the World Open for the first time in a full ranking tournament, after which he defeated number 14 in the world Kyren Wilson 5-0 and only lost in the round of 16 after a 4-2 lead in a competitive decision-making frame with 4 : 5 against Ali Carter . Then he reached the round of 32 three times, but also lost his first round game twice. Only at the penultimate tournament of the season, the China Open , did he make a second round of 16 with victories over Marco Fu and Matthew Stevens . And only then did he improve to 62nd place in the world rankings, which is the first time that he secured himself directly on the Main Tour.

The 2017/18 season was mixed. Moving into the last 32 at the World Open brought him his highest ranking position with 58th place. When he then only played at the Scottish Open - where he was world number 6. Shaun Murphy beat 4: 3 at the start - if he made it into the third round, he was only 65th before the final world championship and would have missed the further qualification by one place. In the second round match against Zhou Yuelong , however, he turned a 2: 5 deficit into a 9: 5 lead and with the victory over the Chinese got the necessary points for a top 64 placement and stay on the tour. But he clearly missed his first Crucible entry at the World Cup with a 4:10 against Liam Highfield .

In August 2018 Wells reached the quarter-finals of a world rankings tournament for the first time in his career at the Paul Hunter Classic and in December of the same year the semi-finals of the Scottish Open , where he narrowly lost 5-6 to Mark Allen .