Dulwich is a suburb of the London boroughs of Southwark and Lambeth . It lies in a valley and borders, among other things, on Camberwell and Crystal Palace . Until 1889 Dulwich belonged to the county of Surrey and was then incorporated into the newly created County of London . After its dissolution in 1965, the district was assigned to the districts of Southwark and Lambeth.

The first written mention of Dulwich comes from King Edgar I , who awarded the Earl Aelfheah a hamlet in the area in 967 . The name Dulwich has been pronounced in different ways over time, such as Dilwihs , Dylways or Dullag, and goes back to the plant dill . The land was owned by Harald II , among others, and after 1066 belonged to William the Conqueror . In 1333 the number of residents of Dulwich was given as 100 people. In 1538 Henry VIII took possession of the place and sold it to goldsmith Thomas Calton for £ 609.

His grandson sold the land in 1605 to actor and entrepreneur Edward Alleyn for £ 4,900 . He built a school and set up a foundation with his assets. Their successor organization still owns around 6 square kilometers of the area. The school was split up in 1882, creating Dulwich College and Alleyn's School . In the 17th century, King visited Charles I. the Dulwich Wood to hunt there. The springs in the city area became famous all over London early on. As early as 1677 the author John Evelyn reported on the healing springs of Dulwich. In 1739 the owner of a pub had a well dug south of the town center. The water found there was believed to have laxative effects and it was used for medicinal purposes for some time. Around 1815 William Glennie founded a school in Dulwich Grove, one of whose students was Lord Byron . The concerts held at the school drew famous visitors such as the poet Thomas Campbell and the painter and inventor of the panorama picture Robert Barker . The Dulwich Picture Gallery was built between 1811 and 1814 . As a result of a targeted disinformation campaign by the British military to protect central London, Dulwich was hit by numerous V1 and V2 bombs during World War II .

The urban area is divided into East Dulwich , West Dulwich and Dulwich Village . Dulwich is bordered by Crystal Palace to the south, Tulse Hill to the west and Denmark Hill to the north . Camberwell joins in the east. 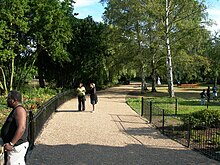 Dulwich has a football club with Dulwich Hamlet FC, founded in 1893, which currently plays in the National League South . This association is supported by the J Sainsbury group . Another club is Fisher FC, which plays in the amateur league . Both clubs are based in East Dulwich. The Old Alleynian Football Club team plays in rugby union . Originally founded exclusively for students at Dulwich College, the team is now open to everyone. The Dulwich Park was opened 1890th The current area of ​​the park used to be farmland. Today the park is part of the recreational concept for Dulwich. Among other things, it offers a children's playground and a tennis court.

Dulwich Hospital in East Dulwich was built from 1885 to 1887 according to the plans of Henry Jarvis. When it opened, it offered space for 723 patients. The hospital was later converted into a military hospital. Around 15,000 wounded were treated there during the First World War . In 1931 the hospital was expanded to include an operating theater . In 1964 the hospital merged with King's College Hospital in Denmark Hill. The newly created hospital does not currently have an emergency room . In Dulwich Village there is a fountain that was dedicated to Dr. George Webster, founder of the British Medical Association , recalls. He worked in Dulwich between 1815 and 1875. The old cemetery in Dulwich Village was founded by Edward Alleyn. On September 1, 1616, the Archbishop of Canterbury held the consecration service . Numerous victims of the plague were buried in this cemetery . In 1858 the cemetery was closed. The wrought-iron entrance gates and twelve tombstones are now a listed building. The building of the town's old elementary school was designed by Charles Barry .

Belair House (now Beauberry House ) is between West Dulwich and Dulwich across from West Dulwich Railway Station . It was built for John Files in 1785 . It was privately owned until 1938 when it became part of Southwark Council. From the beginning of 1990 the house fell into disrepair until it was finally bought by a private investor in 1998 and converted into an upscale restaurant. The building has a large park that is open to the public. The lake in this park is the only part of the River Effra that does not flow underground.

The Crown and Greyhound pub

Bell House is on College Road and was built in 1787 for Thomas Wright , later Lord Mayor of London . It first became part of Dulwich College and did not return to private ownership until 1993. A large extension was added in the middle of the 19th century. Today, not only the house itself, but also the wall that separates the garden from the house is a listed building.

The Crown & Greyhound Public House is located in Dulwich Village. In the 19th century there were two pubs in its place , one called the Crown and the other called the Greyhound. While the grown was mostly attended by workers, the local nobility met in the Greyhound. The Greyhound also served as a stopping point for carriages on the way from Piccadilly to Sittingbourne in Kent . Charles Dickens often visited the greyhound when he was in Dulwich. The building is now a listed building.

The All Saints Church in West Dulwich is located in Rosendale Road. The building, built in neo -Gothic style between 1888 and 1897 to a design by the architect George Fellowes Prynne , was originally intended to serve as a cathedral for South London . However, the original design has been scaled down. On June 9, 2000, a fire broke out in the church building, severely damaging it. In April 2006 the church was reopened after extensive renovations.

The St Barnabas Church was consecrated in 1894 and also belongs to the Church of England. It is on Calton Avenue, on the edge of Dulwich Village. Designed by WH Wood building fell on 7 December 1992 an arson victim and burned to the ground. After a large fundraising campaign, a new church planned by Larry Malcic was opened at the same location in 1996 .

Dulwich is on the A205 , one of London's ring roads . On College Road, which runs directly through the city, there is a toll station , the origins of which go back to 1789.

With a total of three train stations, the urban area is connected to local public transport . From West Dulwich Railway Station, Victoria Station is a 12-minute drive. Trains to and from Blackfriars also run from here . Via West Dulwich you can also reach the northern stop on the Thameslink . From the train station East Dulwich leads in 12 minutes to London Bridge Station . The city ​​center can be reached in 14 minutes via North Dulwich train station . Bus routes 3, 12 and 37 as well as 40, 176, 185, 197, 201, 450 and 484 run to and from Dulwich. Bus route P4 takes you to Brixton or Lewisham , bus route P13 connects Dulwich with Newcross and Streatham .

Little is known about the fact that the land register of those plots in the direct line between North and West Dulwich Railway Station has a clause that guarantees the right to build an underground line under these plots .