from Wikipedia, the free encyclopedia
This is the spotted version , flagged on May 2nd, 2020 . There is 1 pending change that has yet to be viewed. This article shows the population development of Munich in tabular and graphical form.

On March 31, 2017, the official population of Munich was 1,469,098 according to an update by the Bavarian State Office for Statistics and Data Processing (only main residences and after comparison with the other state offices ). As of December 31, 2015, the city of Munich's statistical information office (STAB) reported a population register-based number of 1,521,678 inhabitants, whereby the numbers of this office are always slightly higher than those of the state office due to different calculation methods. 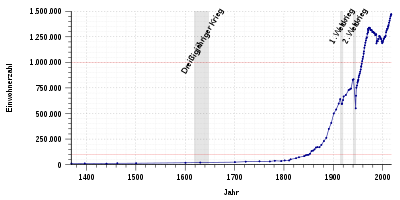 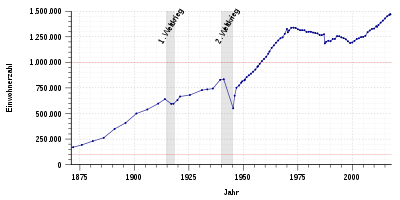 In the census of December 5, 1917, a total local population of 595,002 people was determined. According to the economics department of the War Food Office, these included 52,040 military personnel and 408 prisoners of war. The statistics do not include 10,230 temporarily absent military personnel.

The effects of the Second World War are clearly visible . By the end of the war, 90 percent of the historic old town and 50 percent of the city as a whole had been destroyed by 73 air strikes . It is estimated that around 6,000 people died. Overall, Munich lost a third of its residents through evacuation, flight, deportations and air raids. The population decreased from 829,000 in May 1939 to 550,000 in May 1945.

After the war, many people who had been evacuated to the rural area, as well as refugees and displaced persons from eastern Germany settled in Munich. In 1950, as many people lived in the city as before the war. Shortly before the city's 800th birthday, on December 15, 1957, the one millionth Munich resident was born. In 1957, Munich was the youngest city with at least one million inhabitants out of 70 cities worldwide. In 2006, the city with 1,294,608 inhabitants ranked third among the major German cities behind Berlin and Hamburg . After the peak in 1972, the population initially decreased again, as Munich was affected by the trend of suburbanization, the move of wealthy residents to the suburbs. Since the 1990s, the population has been growing again, driven by positive economic development and strong immigration, and made possible by redensification and the construction of several new large residential areas, especially on former barracks.

The following overview shows the number of inhabitants according to the respective territorial status. Until 1824 it is mostly an estimate, then census results (¹) or official updates by the State Statistical Office. From 1840 the information relates to the “customs clearance population”, from 1871 to the “local population”, from 1925 to the resident population and since 1987 to the “population at the place of the main residence”. Before 1840, the number of inhabitants was determined according to inconsistent survey methods.

The results of the consumer group statistics , which were obtained from the data on the food allocation and published by the Federal Statistical Office in 1953, provide an assessment of the population development in World War II . According to the small consumer group statistics, the civilian population served in Munich at the beginning of February 1943 comprised 761,429 persons (including 37,665 group caterers), in mid-August of the year 795,882 (including 80,804 group caterers), at the beginning of February 1944 only 686,225 (including 78,418 group caterers), in mid-August 1944 597,381 ( including 70,813 communal caterers) and in mid-November 1944 only 566,838 people (including 64,593 communal caterers).

In their 2006 “Guide to Demographic Change 2020”, in which the Bertelsmann Foundation provides data on the development of the population of 2,959 municipalities in Germany, Munich's population is predicted to increase by 7.8 percent between 2003 and 2020 (96,988 people) . 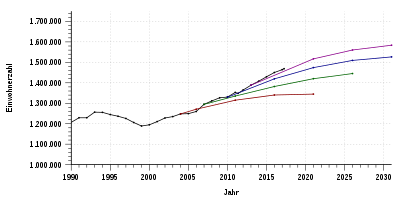 The forecasts opposite compared to the real development from 1990 onwards

Absolute population development 2009–2030 - forecast for Munich (main residences). During this period, the population is assumed to have increased by 197,030 inhabitants or 14.82%.

Absolute population development 2012–2030 - forecast for Munich (main residences). During this period, the population is assumed to have increased by 195,710 inhabitants or 14.10%.

In the planning forecast of the city administration, Department for Urban Planning and Building Regulations, from 2007, an increase in the population entitled to live (main and secondary residences) between 2006 and 2020 by 4.9 percent (66,964 people) is predicted. 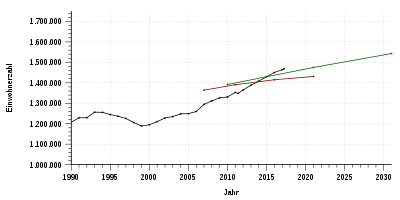 The forecasts opposite compared to the real development from 1990 onwards

In the planning forecast of the city administration, Department for Urban Planning and Building Regulations, from 2009, an increase in the population entitled to live (main and secondary residences) between 2009 and 2030 by 10.9 percent (151,415 people) is predicted.

The official statistics do not include naturalized persons and German-born children of foreign origin as foreigners. 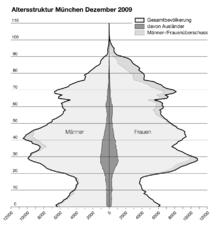 The following overview shows the age structure as of December 31, 2006 (main residences).