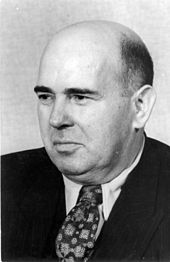 Born the son of a carpenter, after elementary school, Wollweber hired raftsmen on the Weser as a cabin boy when he was 15. From 1916 to 1918 he served in the submarine department of the Imperial Navy .

During the November Revolution, Wollweber took part in the Kiel sailors ' uprising, became chairman of the soldiers' council of the U-boat cruiser association and, as such, a member of the Kiel general council of soldiers . In 1919 he joined the KPD . Against the extradition of the German deep-sea fleet to Great Britain, as envisaged in the armistice agreement , Wollweber tried to organize the coup-de-sac occupation of the most important warships and their delivery to Soviet Russia , but the plan failed in January 1919.

Wollweber took part in the March fighting in Central Germany in 1921, became political secretary of the KPD district of Hesse - Waldeck and a member of the central committee of the KPD. From August to October 1922, Wollweber took part in the KPD's 1st Reich Party training course in Berlin. From July 1923 he headed the KPD military organization of Hesse-Waldeck and Thuringia . He attended the First Military School in Moscow and became a liaison to the Red Army sabotage department .

In 1924 Wollweber was charged with high treason for participating in the March Fights and imprisoned until 1926. From 1928 to 1932 he was a member of the Prussian Landtag and then, from November 1932 until the National Socialists came to power in March 1933, a member of the Reichstag . From 1932 he was Reichsleiter of the " Union of Seamen , Dock Workers and Inland Skippers" in Hamburg, and from 1932 head of the organizational department of the Central Committee of the KPD and member of the secretariat of the Executive Committee of the International Union of Seamen and Harbor Workers (ISH) 1933 Secretary of the ISH in Copenhagen.

From 1936 he participated in the construction of an apparatus (wool weaver organization) for the worldwide sabotage of the navy of the fascist states. The acts of sabotage mainly took place in Scandinavia . During the Spanish Civil War in 1937 Wollweber organized arms deliveries for the Republican government, but was arrested in Sweden in May 1940 . To avoid being extradited to the German Reich , he was sentenced to three more years in prison. After receiving Soviet citizenship in 1944, he applied to leave the country. He stayed in Kislovodsk for a cure and then in Moscow .

Wollweber returned to Germany in the Soviet zone of occupation in March 1946 and became a member of the newly founded SED in May of the same year . In 1947 Wollweber rose from deputy head to head of the General Directorate for Shipping . On November 17, 1950, he was introduced to his office by Minister Hans Reingruber as the newly appointed State Secretary of the Ministry of Transport . On April 30, 1953, Wollweber was appointed State Secretary for the State Secretariat for Shipping by the Council of Ministers and sworn in by the President of the People's Chamber, Johannes Dieckmann, on June 25, 1953 . Rumor has it that between 1950 and 1953 he was State Secretary in the Ministry of Transport on behalf of the Soviet Union and rebuilt the wool weaver organization .

In July 1953, Wollweber took over the management of the MfS with the rank of State Secretary while at the same time being appointed Deputy Minister of the Interior and directed his main attention to Western intelligence services, above all the Gehlen organization and later the Federal Intelligence Service (BND). In numerous speeches he highlighted successes in uncovering and convicting alleged spies, not least to see the State Secretariat upgraded to a ministry again. His predecessor Wilhelm Zaisser had tried in vain to overthrow the dictatorial central committee chairman Walter Ulbricht and to stop the building of socialism decided in 1952 , which led to the uprising on June 17, 1953 . He had been overthrown for this, and because his authority had neither thwarted nor even foreseen the uprising, the MfS was downgraded to a state secretariat for two years. In 1954, Wollweber received the GDR Patriotic Order of Merit, which was founded in the same year . From 1954 to 1958 he was also a member of the People's Chamber and the Central Committee of the SED . Wollweber announced his resignation on October 31, 1957 "due to illness at his own request". His successor was his deputy Erich Mielke . 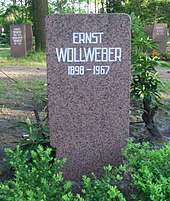 In January 1958, proceedings against him for “violations of the party statutes” were initiated, and he and Karl Schirdewan were expelled from the SED Central Committee for “ factional activity ”. He received a "strict party reprimand" and had to resign from the People's Chamber; Since then he has lived in retirement as a pensioner and memoir writer on the Obersee in Alt-Hohenschönhausen / East Berlin . His death on May 3, 1967 received little public attention in the GDR , but his urn was buried in the “Pergolenweg” grave complex of the Socialist Memorial at the Friedrichsfelde Central Cemetery in Berlin-Lichtenberg .

Minister for State Security of the German Democratic Republic (from 1989: Office for National Security - AfNS)