Particle model of a solid 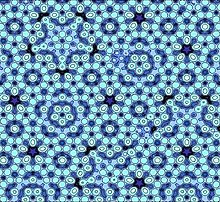 Solids (also solid ) refers to the science of matter in the solid state of aggregation . In the narrower sense, this also means a substance that has a solid state of aggregation at a temperature of 20 ° C, the term solid in this case being substance-specific, but not temperature-specific. In technical parlance, solids have a certain minimum size , but this is not clearly defined. They are therefore macroscopic bodies - in contrast to microscopic bodies. For example, a macromolecule on its own is not usually considered a solid. Matter in the transition area is called a cluster .

The solid-state physics is concerned with the physics of matter in the solid state, as a special case of the condensed matter , the liquids including. The materials science is primarily concerned with the physical and chemical properties of solids. In addition to the chemical composition of existing materials, solid-state chemistry is particularly interested in the synthesis of new materials. The disciplines are not sharply delimited either from one another or from mineralogy , metallurgy and crystallography .

A distinction is made between amorphous (“shapeless” on the smallest scale) and crystalline (consisting of crystals ) solids. The Solid State Physics deals mainly with the properties of crystalline solids. A solid can - as in geology - consist of a solid structure , as can be recognized, for example, by the sparkling of tiny grains in marble .

Single crystals
With single crystals , the whole body consists of a single crystal. There is a regular, more precisely one that is periodic in all dimensions, of its building blocks. The nature of the underlying structure is responsible for many properties of a solid. For example, carbon has two different crystal structures - graphite and diamond - which have completely different electrical conductivities (graphite conducts electricity, diamond is an insulator ). Some minerals occur as natural single crystals with a characteristic external shape.

Quasicrystals
In the case of aluminum-metal alloys, the so-called icosahedral phase, which belongs to the new research area of quasiperiodic crystals and was discovered by Dan Shechtman.

Amorphous solids
The physics of amorphous solids is multi-layered, because it includes all solids that do not have a regular structure. Most glasses or some solidified liquids are only a few representatives of this genus. With the loss of a macroscopic structure, many typical properties of a crystal are also lost. For example, most amorphous solids are poor electrical conductors. Nevertheless, this area is an interesting topic in research, as a lack of crystal structure also means a lack of anisotropy effects.

Polycrystalline solids
Crystalline and amorphous are not the only possible manifestations of solids. In between there is an area that is, so to speak, a hybrid: The polycrystalline solids. These consist of a collection of small single crystals that are disordered and built into a large whole.

The cohesion of a solid is based on an attractive (attractive) interaction between the atoms or molecules over long distances and a repulsive one on short ones. The energetically most favorable distance is called the equilibrium distance . If the thermal energy of the atoms is too low to escape this potential trap, rigid arrangements form - the atoms are bound to one another . The equilibrium distances assumed in this way are characteristic of the respective substance and are typically in the range from about 0.1 nm to 0.3 nm.

There are essentially four types of bond that significantly influence the structure and properties of a solid:

The ionic bond always occurs - at least partially - when the solid is made up of different elements that have different electronegativity . One element gives the other an electron, so one becomes an anion and the other a cation . The different charges cause an electrostatic attraction . Salts are a typical representative of this type of bond.

The covalent bond , also called atomic bond, is based on a reduction in electronic energy. The principle is the same as for the formation of molecules (e.g. O 2 ). Elements of the fourth main group ( carbon , silicon , germanium ) are bound in this way. It then refers to the state of the electrons as sp 3 - hybridization .

The metal bond is an extreme case of the covalent bond. This bond is also due to a reduction in electronic energy. Only here the overlap of the orbitals of the atoms is so great that they also interact with those of their next-but-one (or even more) neighbors. One can imagine that the ion cores of the atoms are embedded in a lake of electrons. As the name suggests, metals form this bond.

Van der Waals interactions always occur, but they are so weak that they only become so noticeable in the absence of other types of bond that one can speak of real van der Waals bonds. The attractive force is a component of the total electrostatic interactions, which decreases with the reciprocal distance to the 7th power and is caused by locally induced dipole moments in the electron density. Noble gas and molecular crystals are only held together by these. Van der Waals interactions are among the dispersion interactions that are caused in the band or orbital model from perturbative contributions of the 2nd and higher order of the interelectronic repulsion.

These types of attachment are by no means isolated cases that only occur either-or. The transition from ionic to covalent to metallic bonds is fluid. In addition, different bonds can occur side by side in solids. Graphite e.g. B. consists of layers of covalently bound carbon atoms, while the layers as a whole are held together by van der Waals bonds. Since the latter bond is so weak, graphite is used as a pencil lead - the bonds tear when rubbing over paper. Crystal structures with different types of bond are called heterodesmic, those with only one type of bond are called homodesmic.

With the surface one means the final 1–3 atomic layers on the border to the vacuum. The lack of binding partners to one side usually results in relaxation , reconstruction or recombination for atoms in these layers . The atoms try to adopt an energetically more favorable state by changing their bond length to deeper layers (relaxation) or by rearranging their positions and saturating open bonds (recombination). The result is new surface structures that can have a different periodicity than the substrate (deeper layers).

Another special feature is the appearance of surface conditions . This means that in the otherwise energetically forbidden areas - the band gaps - permitted energy states for electrons can arise. In semiconductors, these new states cause the ribbons to bend and thus change the electrical conductivity. This can lead to conduction channels, which is used, for example, for field effect transistors .

Depending on their electrical conductivity , solids can be divided into conductors, semiconductors and non-conductors. This classification was historically determined. However, an explanation for the differences in conductivity could only be provided by the ribbon model . Nowadays the group assignment is therefore determined by the size of the band gap .

ladder
Almost all metals are among the electrically good conductors. The conduction electrons behave as if they can move freely in the solid. However, as the temperature rises, the conductivity decreases, which can be explained by the increased impact of the electrons with the lattice vibrations.

The electrical conductivity is one of the most variable quantities in physics, the possible values ​​extend over more than 30 orders of magnitude. Most non-magnetic solids show another amazing effect at very low temperatures: below a critical temperature, the electrical resistance disappears completely; this state is called the superconducting phase.

In contrast to liquids and gases , the particles in the solid state of aggregation are only minimally mutually displaceable - according to their crystal-like fine structure . Such deformations are difficult to model in the smallest detail, but they follow clear laws over millions or trillions of particles . They are related to elasticity and its modules , as well as to the shape and dimensions of the body to be deformed.

An idealized solid that is used as a model of a solid in classical mechanics is the rigid body . It is not subject to any deformations, but does not occur in nature . In most cases it is a good model for the real objects in our environment. The real solid body, on the other hand, usually does not have a simple, but a direction-dependent deformability. This covers solid-state physics, for example.

Other typical attributes of solids are their conductivity for heat or electrical current . These two properties are usually closely linked.

Under the action of high pressures, solids change from the normal phase with changes in properties to a high pressure phase, or other modifications of the substance arise. Examples are the conversion of graphite into diamond at a pressure of more than 60  kbar or the conversion of α- boron nitride into β-boron nitride (borazon). At a pressure of over 150 kbar, silicon exhibits a drastic drop in resistance and changes into a metallic high-pressure modification with a β-tin structure type. The sodium chloride lattice of potassium halides transforms into the cesium chloride lattice at a pressure above 20 kbar . In general, when pressure is exerted, the particles of the solid move into closer packing, combined with an increase in the coordination number . Covalent bonds often become metallic bonds with delocalized electrons. High pressure processes are suitable for the production or crystal growth of compounds, which are then metastable even under normal pressure , for example to produce artificial diamonds.